Technology companies balance STABILITY and INNOVATION in the products and services they sell and support. Given that,

I think Wyze should emphasize Stability OVER Innovation:

1 Like
Wyze app is terrible!
Tasteless Facebook Ad
(iOS v 2.6.62) Is anyone else as unhappy with this new app as I am?
Why was Android hardware decoding removed?
A Fair Assessment?
Is Anyone Actually Satisfied With Their Wyze Camera?
Loads of stuff suddenly not working in Wyze app!
Suggestion- quit updating app and cameras if they are working
Finally saying goodbye to Wyze
Rules erratic
Question about if wyze goes out of business
peepeep September 13, 2019, 2:51pm #2 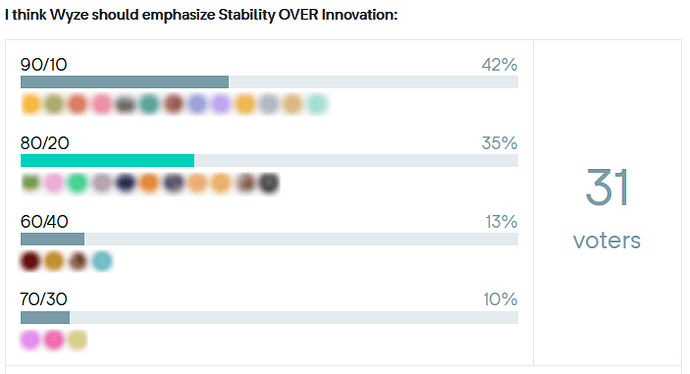 If you want to promote this poll on the boards (to encourage participation) add a pertinent comment. This sets its status as “newly updated” and it jumps to the top of the list of topics.

Oddly, an actual vote in the poll has no effect in this respect.

Well, a full two years and still a pertinent question, I think.

Born out of this exchange:

To @Frederik and anyone else who might be interested: From my outsider’s point of view (I have average-plus tech knowledge and skills) the poll question above is pertinent and satisfying. From your insider’s POV, is it a good question - or is it flawed, insufficient, or just the wrong question altogether? P.S. I’m not sensitive, speak frankly (if you choose to respond.)

The biggest problem is that people have no idea what does it mean 60/40 vs 80/20. Is that feature quantity versus time allocated? Practically, they can not relate that to what they will get or how it is going to impact their experience with the app. Most people want to have a feature rich app but super simple way to use everything because they don’t understand technology and even less software development best practice. There is only a fringe of users that are tech savvy that want to have somet…

Keep in mind, at that time Wyze had far fewer products (in public & early-access release.) If someone knows the exact number and what they were, chime in.

Now they have many many. Many. A lot.

So… they chose a path, not meekly, but balls-out.

And here we are.

Why is Wyze Launching this non-Camera Product - Q&A Reference

Every time Wyze launches a new product, there are lots of comments and questions from people thinking the new product seems unrelated to Wyze’s market/industry, or being worried that it could take away from support of already launched products . This post is intended to be able to refer people to in order to see a summary of the answers the Wyze (Co)Founders have given in direct response to those conventional concerns.

Do you accept the rationale that they have been scrambling to stay alive?

Youtube Video: The Future of Wyze is Coming (Part 2!) Watercooler

Just saw this post to the Wyze Youtube channel, Interesting that the majority of the comments that I read (I didn’t ready them all) were all a Wyze LoveFest. Don’t get my wrong, I like (Love is pushing it) my Wyze cams, but there are a few glaring issues that still need to be addressed by Wyze (Landscape on iPads/Android Tablets, Web interface to video feed & RTSP/ONVIF). I’d change from ‘Like” to “Love” if those three items were addressed/resolved by Wyze [The Future of Wyze is Comi…

If they’ve been struggling to stay alive it’s only because they can’t seem to make products that work correctly. Right now they have a giant mess with notifications, AI event tagging, CamPlus etc… are broken for several people, and that’s only the ones who have posted on this forum. I’m sure there are a bunch more that it’s happening to. It has been happening for well over one month with Wyze claiming several times “it’s fixed” when it hasn’t been fixed at all.

I was going to buy a Doorbell and couple of smart plugs but decided against it because why would I want to buy even more broken products from a company that can’t even make their main product (cameras) work properly?

If they’re struggling, this is why. Instead of trying to create a million products that don’t work, why not just focus on getting their primary product line to work?

Seriously, the broken notifications, AI, CamPlus right after I subscribed to it, going on over a month now without a solution has stopped me from buying more products I was going to buy from them. Whether they hear it directly from the customers or not, their crappy products are losing them customers and sales.

And the beat goes on…

Gun Safe!?! Just When I Think You Guys Couldn't Get Any Better!?!