Youtube Video: The Future of Wyze is Coming (Part 2!)

Interesting that the majority of the comments that I read (I didn’t ready them all) were all a Wyze LoveFest.

Don’t get my wrong, I like (Love is pushing it) my Wyze cams, but there are a few glaring issues that still need to be addressed by Wyze (Landscape on iPads/Android Tablets, Web interface to video feed & RTSP/ONVIF).

I just thought it was funny that AI is their priority and the leader can’t pronounce “recognize”. (He says “reckonize”.)

Interesting how forthright they are about depending on CamPlus revenue to save the company. This of course is exactly the recurring revenue stream that EVERYONE in the world noted was missing when the “free” cloud storage began with the first Wyzecams.

Elana. What happened to Elana. I haven’t been following that closely but I noticed the founders dropped from a quartet to a trio last year (without explanation, AFIK.)

You know those pix of the traditional couple with one looking up at the other adoringly and the other with gaze fixed on the horizon?

I think the writing is on the wall…more subscriptions, fewer functions without them, if any.

Hmm, might as well give the cameras away for free then, full Gillette razor model…

Disappointed, then? Or just fact of business life, too bad?

If Wyze really wants to distinguish themselves, they’d ass-kick all these lingering issues in a six month corrective blitz. That would create a significant buzz that would last.

Hinted at it maybe in “our support must improve.” We shall see.

I’ve only had about 5 other brands of consumer oriented network style cameras since the 1990’s and maybe I’ve just got lucky but Wyze support and their quick reaction to problems has been the best of all. A large portion of that could be the user support found here and reddit.

Not sure exactly what you’re saying here. Yes, disappointed. I don’t have much need for all the subscriptions. CamPlus is nice but I don’t really need it. Home Monitoring is inexpensive but isn’t ready for prime time yet so for me it sits idle, just making some noise when a couple of doors open.

I like the sensors, plugs, bulbs etc. but there isn’t any subscription needed for them. I can use them with Alexa and other third party stuff which is more than enough for my needs.

Disappointed, then? Or just fact of business life, too bad?

I guess the former would imply greater commitment and expectations that were not met.

The latter, less commitment and lower expectations from the start, because ‘business is business.’

I’m in the same position as you describe, roughly. And I’m like, “too bad, but ok…”

Oh that’s funny; didn’t catch your point earlier. You think old Dave is heading for a jilting and doesn’t “reckonize” it?

Wyze is still a good deal; I would continue to recommend the V3 to ordinary humans with two provisos - CamPlus is a practical necessity and the resolution is far lower than much of the competition.

(I have never had CamPlus.)

The V2’s and Pans are still viable where one is just monitoring a well lit situation and doesn’t need all the bells and whistles (such as a pet monitor or daylight yard monitor).

Unclear as to what you mean - past as in “after seeing the video”?
If so maybe. I’m a Wyze V2/V3 & Pan fanboy for watching things. For security I rely on neighbors and the police, Although down in Mississippi I do try and burn up a little 12 gauge shells and small arms ammo to make my presence known occasionally.

Just yesterday I found myself explaining the benefits of the V3.

/And anyone I recommend Wyze to is either family or a friend, so they have some “technical support”.

(Just posted this on YT) Thanks for the video and congrats on the funding. Dave (and others at Wyze), if you’ll indulge me for a moment … I’m one of your very first customers. Purchased a few V1 cams back in Oct 2017 and many newer ones since, as well as other products (i.e. headphones, etc.). I’ve been active over in the Wyze Community forum since early 2018, usually sharing information, solutions and an occasional video capture (raccoons, etc.)! I’ve been pleased with every purchase I’ve made. What I’m still waiting for, however, is a feature that (surprisingly) has been missing from Day 1 - namely, app-wide Landscape mode for tablets (iPad in my case). I first requested this back in 2018, resulting in a new Wishlist item. Hundreds of other tablet users (iPadOS and Android) have requested it as well. The reason I need Landscape mode is that I have a physical disability that makes it difficult for me to pick up and rotate my iPad 90° whenever I launch the app. I suspect those with attached keyboards have a similar frustration. Anyway, it would be SO much easier for me if your team could incorporate this into the app. Thanks.

I’d have to answer this with: it depends. I think the cameras work reasonably well, as do the bulb, plugs and various sensors. CamPlus works, mostly, but gives too many false alerts. And, as I mentioned elsewhere, I couldn’t in good conscience recommend the Home Monitoring service to anyone right now.

I bought the V2 cameras thinking I’d use RTSP but found the implementation unstable in my environment. I was reasonably happy with the V1 sensors until they began failing because of low batteries. I may go back to RTSP and using the sensors with Home Assistant and the plugin that bypasses the Wyze servers to talk directly to the sensors. I’ve also started to test SmartThings and Z-Wave devices.

All in all, Wyze hasn’t convinced me that the best path forward is with their products.

Maybe I’m just missing it…I checked in the Account Tab for iOS and the option for Legacy Person Detection seems to be missing. Has this been terminated in line with the need for revenue?

You think old Dave is heading for a jilting and doesn’t “reckonize” it?

Actually, no, they were just two discrete things that occurred to me - I like your story better.

I’m sensitive to ‘omission’ so no mention of a missing founder made me wonder why.

On closer inspection, Dave isn’t looking at his partners ‘adoringly’ - he’s looking straight at the camera, smiling. He’s the storyteller, the public face, so that makes sense, but the staging of things interests me and ‘vintage couple’ dynamics popped to mind. (I like to kid the kids.)

I still wouldn’t recommend this stuff to anyone ‘ordinary’ who lacks a support network. This iOt thing is like herding billions of cats that never sleep (dynamic variables) and adding millions more each month. Udder. Madness.

But you have to be a little mad to want to out-Bezos Bezos. So it goes. 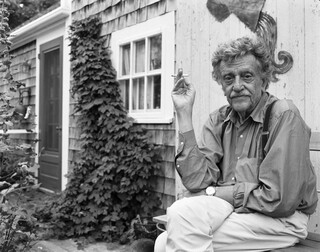 Unclear as to what you mean - past as in “after seeing the video”?

No, but that question and your response is interesting, too.

I meant something on the order of:

Are the products closer to ‘turn-key’ than they were when you arrived? Has Wyze Support improved steadily over time?

Maybe I’m just missing it…I checked in the Account Tab for iOS and the option for Legacy Person Detection seems to be missing. Has this been terminated in line with the need for revenue?

On Android app v.2.24.23 (latest), it appears where circled. But only after I entered the red-arrowed spaces and exited. I think. I may be hallucinating. Unruly feline dreams. 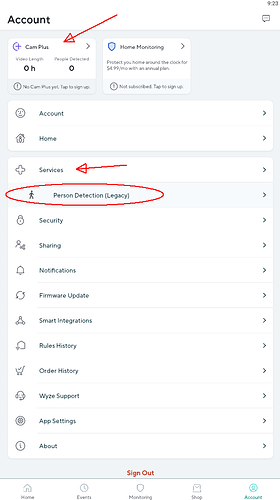 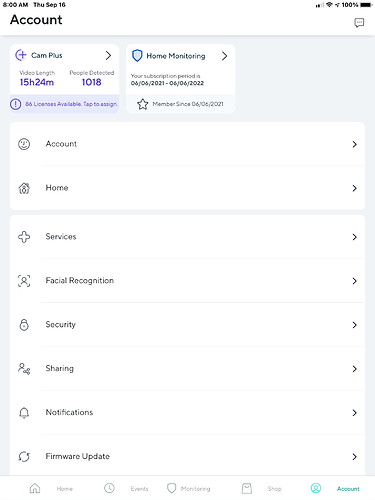 Are the products closer to ‘turn-key’ than they were when you arrived? Has Wyze Support improved steadily over time?

The cams seem not much closer to “turn-key”. Wyze support has fluctuated, Although I use it very infrequently. Usually once I establish that I know what I’m doing, explain what I’ve done and maybe run a test at their suggestion the problem is solved.
The only “problem” with support is shipping. I’ve had them authorize a replacement, then watched it get FedEx’d Dumb post taking many days in the travel time from when FedEx gets it until it gets to me.