Did you guys see that not so subtle V3 hint at the end of that new email!?!? Definitely excited to see what upgrades they added! 4K maybe??

I haven’t gotten any mail from Wyze in many weeks. Care to copy/paste the hint you’re talking about?

Yep, we’ve still got multiple planned product announcements before the end of the year. We’ll just keep them a surprise for now. One of them will probably be our biggest announcement ƐVER. Stay tuned.

Hah! Not so subtle indeed. They really have been busy this year haven’t they. Thanks.

I’m going to go big and guess that they added 4K! Lol

I love Wyze’s hints! I always have fun trying to figure out what their hints mean 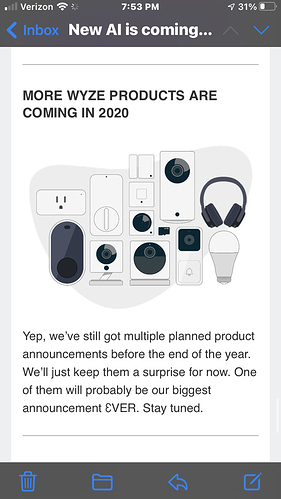 I can’t wait to find out more info on all their upcoming products!

Crud, how did I glance over that!? Well that would be cool!

Yep, we’ve still got multiple planned product announcements before the end of the year. We’ll just keep them a surprise for now. One of them will probably be our biggest announcement ƐVER. Stay tuned.

What makes you think they were referring to a V3? (I’m not saying you’re wrong…they’ve hinted about a V3 for months now). Still, it could be something else they are more excited about than just another cam.

Maybe it’s a Robot vacuum. Some lists of most popular IOT devices show smart speakers at the top, then video doorbells and smart locks, followed by robot vacuums.

We do know they have been developing a smart sprinkler system, though they should wait to release that until late winter / early spring.

It could be a smart heater (haha, don’t kill the messenger everyone).

I am trying not to be too excited for the V3, considering the subscription direction they’ve been taking. I’d love 2K/4K, RTSP/NAS, local PD/Pet detection like others, better detection zones, wired, waterproof, and all the stuff some competitors do locally…but I fear the investors are demanding to keep everything to subscriptions now. If that is the case, I will still buy some V3’s, but I’ll probably mostly use others like Eufy Indoor 2K for better PD, etc.

Speaking of AI detection, I really loved what they are doing with that. Cam Plus will now have Person, Pet, Vehicle, & Package detection! That’s awesome. I might actually get/keep Cam Plus for my Video Doorbell if the costs don’t go up by then.

I mean, their AI is already scanning all the videos, might as well look for those things too while it’s spending the processing time.

Still, I’m hoping the V3 is one of their planned announcements, but that their BIGGEST ANNOUNCEMENT EVER will be something else awesome too.

They added V3 in there. What other V3 would they be referring to? V3 with 4K would be pretty big for them.

I can’t imagine they’d want to store so much 4K footage on the cloud though (which is what they’ve been moving toward forcing on us). I think at best we might hope for 2K, which is still double the resolution.

Regardless it’s safe to say V3 will be announced by the end of the year. The details and specs is totally up in the air for speculation and discussion.

I’m sure it’s going to be made a main part of the new “security system” they’re launching, but hopefully allow us to order them separately too.

Saw it, and I can’t imagine what else it would be with this hint:
“One of them will probably be our biggest announcement ƐVER.”

Even works backward. Ver., Rev. Somebody in marketing deserves a bonus.

I’m sure it’s going to be the V3 cam but I’m hoping the big deal is with the extra processing power in the new cam, they will have PD local again.

Two days ago, Wirecutter accidentally published an article saying Wyze Cam v3 release on Oct 27. Once everyone started talking about it, wirecutter revised the article. You can see the clipping from a screenshot in the reddit discussion.

For the lazy, here is the direct screenshot link.

So, still $20, faster processor, better color night vision, and in the previous paragraph it said Apple home kit, which presumably means dual streaming with at least 1080p & 720p (maybe 2K?) and possibly rtsp and home assistant access (which other home kit products are able to do).

What’s not said:
Probably no PD without cam plus, though they’re getting some awesome new cam plus features (vehicle, pet and package detection).

For $20, I’ll order at least a few even if some of those deductions are wrong.

I hope they don’t force themselves to $20. I would rather pay $30 and have a reliable product.

Exactly. I’d rather it be $30 or $40 with local Person Detection, 2K or higher resolution, RTSP, and reliable local storage options.

Let’s see what they pull off.

I agree with all points made! I really hope lots of new features are added and Wyze doesn’t make any cuts just to keep the price $20. If Wyze needs to up the price that’s fine by me

. I can’t wait to find out more information about the Wyze Cam v3 and hopefully, we only have to wait a few more days

. I’m sure not matter what the price point is Wyze will make another great and affordable product!