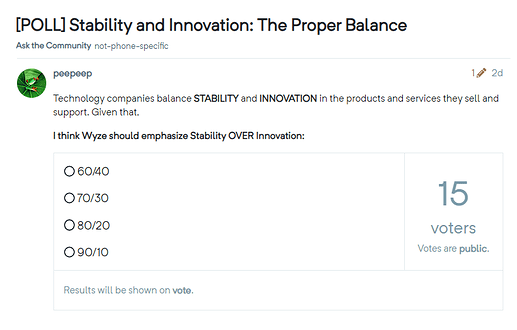 Quite interesting, masterep, thanks for recounting that for us. It resonates somewhat with this:

Why can't I get any Tech Support?

We are slaves to momentum. Every pregnant pause aborted. Every madness conceived.

Hurtling. Headlong. Into what?

Thank you, peepeep. I have made a service request about the going back to the previous version.

Apparently, I’m still on the old version of the app. Whew. I don’t want to mess with it because I’ve never gotten the lightbulbs to work properly and the cameras are pretty spotty with poor vision. The last thing I need is for the app to start getting annoying. Glad I saw this thread!

Reread your post and a few others. “Time frames” and “immediacy” shook out.

I expect tech businesses must project where they believe the world will be X years out and that belief will inform their short and mid-term decisions and planning.

This is not something most customers will be interested in or sympathetic to but it will definitely have an ongoing effect on their user experience.

It’s a tough game. I appreciate your efforts.