Early evening (Wed/Thu), rebooted the Plug that is the Target of the Rule

Rebooting the target Plug may have helped (it didn’t hurt

Cam 2, a different Cam, a similar but separate Rule

Sent logs to support and they’re currently looking into it.

Cam 2 , a different Cam, a similar but separate Rule

ERRATIC   Does this need to be perfect? Not for my purposes, but it’s interesting to know.

Ok, I’m done with the logging. It’s been mildly tedious but helpful to Wyze and the community, I suppose.

Currently I run an Android 6 device that is still powerful enough but which has been OS-excluded from present and future Wyze app versions.

I also run Android 7 emulator Bluestacks on a PC which will be able to use the latest Wyze app into the future.

Regarding firmware, all my v2 cams are (as of today) two versions removed from the latest release. I routinely monitor the success of firmware releases (add features/fixes without introducing new issues to troubleshoot) before accepting the upgrade.

I prize stability quite highly.

I don’t like to physically futz with the cams which are perfectly mounted and aimed with precise motion detection zones established. Remounting multiple cams (for me) is more than tedious, it’s painful.

Operational perfection is nice but I am tolerant of, I donno, 90% plus? I don’t use the cams/plugs/bulbs for anything crucial.

Does any of the foregoing bear upon the ERRATIC Rules performance I am demonstrating?

I don’t know enough (anything, really) about how Rules operate on the backend to say. I mean do they reside primarily in the App software, the Firmware, the backend Server, AWS? Are they not primarily anywhere, but more evenly distributed among components? Heck if I know.

Maybe it makes a difference that I’m running two versions back in both the app and firmware. Maybe it doesn’t.

Maybe the backend is where all the action is.

Maybe someone who knows can give me a clue. Please?

Operational perfection is nice but I am tolerant of, I donno, 90% plus ? I don’t use the cams/plugs/bulbs for anything crucial.

I don’t know enough (anything, really) about how Rules operate on the backend to say. I mean do they reside primarily in the App software, the Firmware, the backend Server, AWS? Are they not primarily anywhere , but more evenly distributed among components? Heck if I know…

Maybe someone who knows can give me a clue. Please?

FWIW, found some light re AWS:

8/31/21 12:00 PM PT- We use a service called Amazon Web Services (AWS) for tasks such as sending notifications. Currently, this service is experiencing difficulty and this is impacting some of our products. Amazon is working on it now but you may experience difficulty with making in-app purchases, IFTTT, Alexa, or Google integrations, notification delays, trouble with Cam Plus Events not playing smoothly or experiencing errors, or a delay when using Wyze Home Monitoring alarms or disarming your system. We apologize and appreciate your patience.

Maybe it makes a difference that I’m running two versions back in both the app and firmware. Maybe it doesn’t.

Unboxed a brand new v2, updated it to the latest firmware, running the latest app on Android 7, created a new Rule to light a bulb when cam detects person.

Same results as demonstrated above.

So did your V2 report a person? I used to have a V2 set that way, but I later replaced it with a V3. So I don’t have anything set up that way ATM.

All that aside, I do have a motion sensor tied in to the same Bulb. So if the motion sensor sees something, or the Person Detection reports a person, the signal light lights. I’ve never had a failure to detect a person, but I don’t know how often the “person detection” is the reason for the detection. The PIR motion sensor is much faster.

So in the failures, did the light fail WITH a confirmed person detection? That would be the difference between a poor rule implementation, and a poor person detection. Gotta focus the fix…

I set up a v2 cam, trigger: on Person Detection, action: turn on a Wyze Bulb Color, turn on 2 regular Wyze bulbs, and turn on a Wyze Plug. Worked perfectly. Maybe I missed something…

Legacy Person Detection on v2 registers person, uploads 12-sec clip and sends person notification, but the related Rule (if person detected on v2, turn on bulb) only fires erratically. When it fails, the bulb doesn’t light and there is no entry in the Rules History. 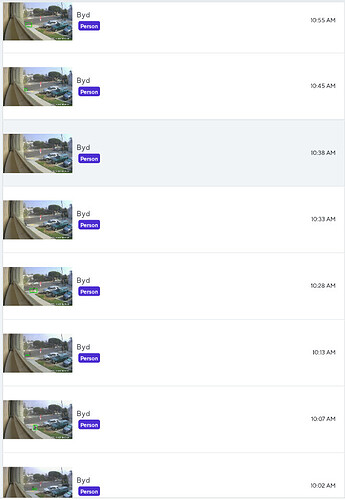 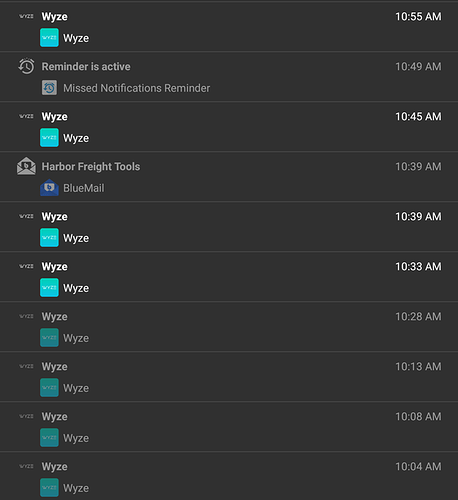 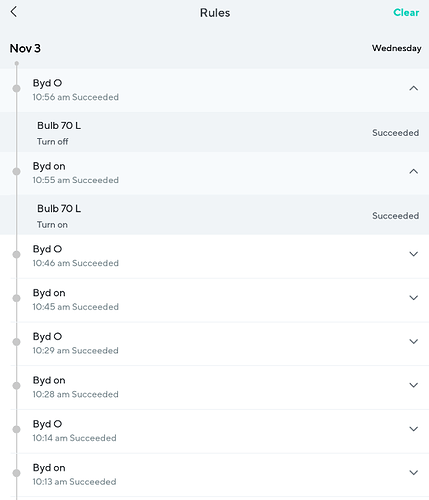 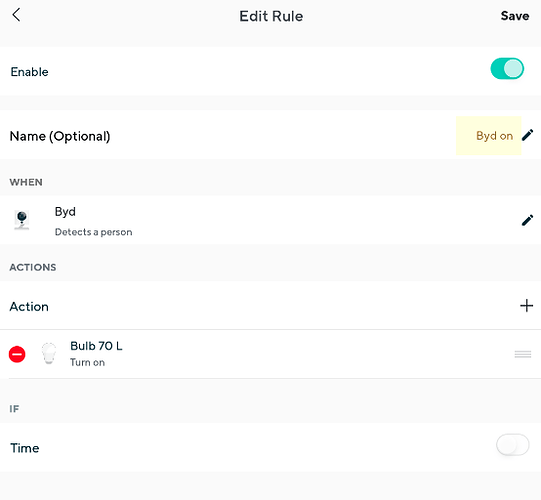 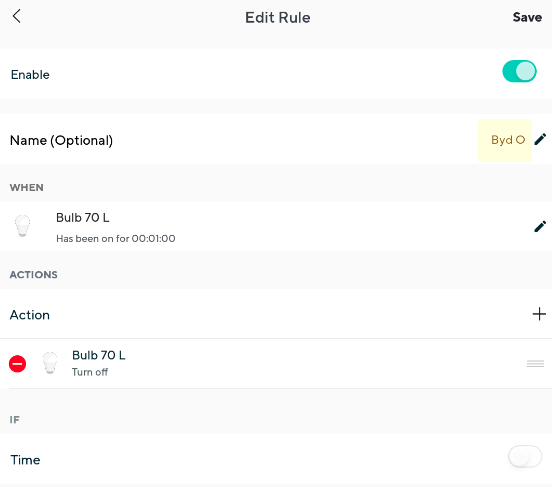 To complicate this further, yesterday two rules disappeared from my Rules List without my deleting them. They were both shut-off-bulb-if-lit-for-x-minutes actions, FWIW (one of them was “Byd Off”, which I had created for testing a few days ago. Created “Byd 0” to replace it, which I used this morning.)

Also, last night, the two person detection trigger rules I actually use (the ones logged in the body of this thread) offered their worst performance yet:

And, all of my v2’s’ are now running the latest firmware as of yesterday.

I’ll DM you an invite to a convo between myself and a Wyze engineer (to which this thread is a companion) so’s you can have a look see how far we got (impasse, I’d say.)

Legacy Person Detection on v2 registers person, uploads 12-sec clip and sends person notification, but the related Rule (if person detected on v2, turn on bulb) only fires erratically. When it fails, the bulb doesn’t light and there is no entry in the Rules History.

One’ll-get-ya-ten this is an issue with Legacy Person Detection that can be solved most immediately by subscribing to the CamPlus version.

This morning I ran the same test as above (post #19) but substituted a CamPlus trial for Legacy Person Detection.

Some White Bulb v1 owners speculate that Wyze chooses not to fix the erratic Rules/Scheduling behavior of that product. Quickest fix: Upgrade to White Bulb v2 or Color Bulb.

Are Legacy Person Detection (LPD) customers being led to a similar conclusion with respect to CamPlus?

Will LPD soon be retired with subscribers offered free months of CamPlus to soften the blow?

‘Treating customers like friends’ requires a company to speak to them like adults when a change is afoot. Manipulating customers into behavior beneficial to the company by allowing them to pursue futile troubleshooting is downright ‘unfriendly.’

That said, you’ve got to give Wyze credit for offering LPD gratis (name your price) to compensate those who were promised free on-camera person detection through a software partnership that ultimately failed. That was stand-up, very unusual and quite friendly.

I have V1 V2 and V3 wyze cams, indoor and outdoor plugs. The first time I used rules they don’t work whenever I use If TIME AFTER SUNSET.
The rules only work whenever I remove the If TIME.

Do I need to pay to use the RULEs feature?

I have no experience with the “If TIME AFTER SUNSET” rule condition, so I’ll defer to anyone better informed and more experienced who’d like to offer some advice.

In the meantime, if you haven’t opened a support ticket, you should. If the problem is solved on the forum in the interim, you can withdraw/cancel the support request. If not, you’re poised to go forward with support.

The last three nights (post the big AWS outage recovery) the performance of the two original v2s was stellar: Legacy person detection triggered bulbs and plugs as instructed 100% (as logged in Rules History.)

I had not experienced performance like this since before September 5 - over three months ago.

You can make up your own jokes on this one, it’s too easy.