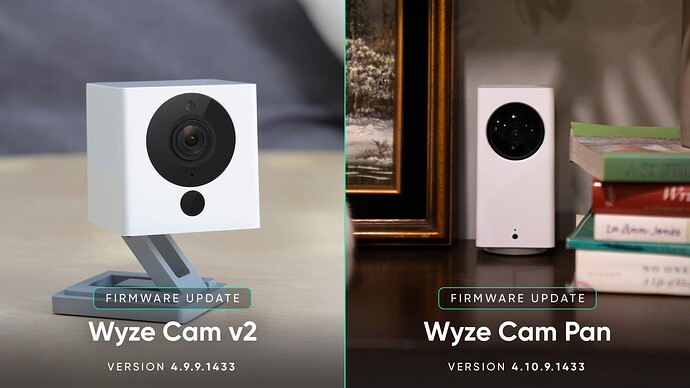 Upgrading to the latest 4.X.9.1433 on multiple Cam v2’s and Pan v1’s has been a total failure for me. This happens at a couple of locations with different routers.

Newer Cam v3’s don’t seem to experience this issue even on the latest firmware.

I don’t have anything out of the ordinary when it comes to the network setup - WPA2-AES with 63 alphanumeric PSK’s, static DHCP, Google DNS.

With Record Sound Events turned off in Event Recordings, the Sound Smart Detections are still able to be turned on.

Also, this FW Release did nothing to solve several problems:

With Motion Tracking On:

With Motion Tracking Off:

The issues with the WCPv1 we’re reported back in June and have only gotten worse.

Did it stop working when you flashed it? If you still have the file on the sd card it will still let you flash it again

I’ve made several attempts to re-flash the firmware from the version I thought worked in the past, but it still doesn’t work. I’ve tried factory reset, difference usb cable, different power adapter, etc. Nothing seems to work.

I’m assuming the firmware flashed okay. I initiate a manual flash by inserting the sdcard formatted fat32 containing demo.bin, I then hold the setup button until the led turns blue. After a minute or two the yellow led appears and re-appears when power cycled.

Redownload the firmware from here, its available

Just use the latest? 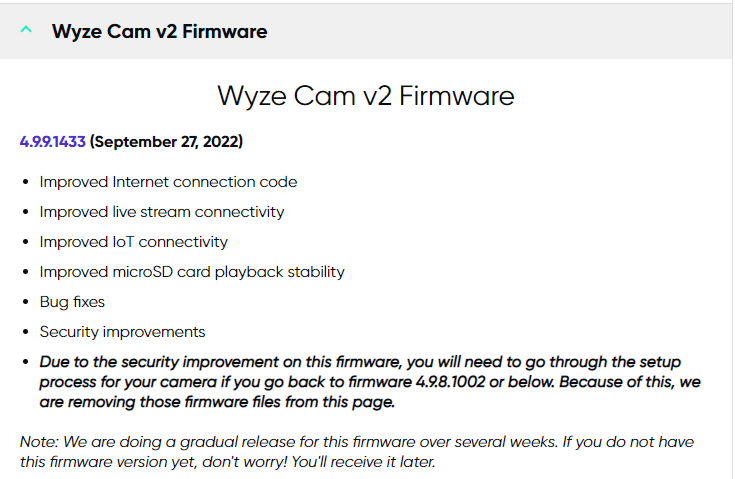 All of my Wyze Pan cameras updated to this firmware stopped working - they no longer connect to the network.

It appears to be a regression associated with guest networks with no password and client isolation.

Anyone else seeing anything like this? Any idea on how to fix it. I tried adding the camera again with no luck.

Using the latest firmware (4.4.4.1433) to update my Wyze Cam 2 is what started me on this path. All my attempts to restore a difference versions have failed. Looks like this camera is hosed.

Intersting that there is an issue with firmware 1433 yet Wyze is is removing all previous firmwares from their site because user has to re-setup if using older firmware. Does it sound logical ? or V2 cameras are doomed?

Notice how WYZE said they added WPA3 security back in July of 2021? I’ve been struggling for them to get this functionality working since December of 2021. I was hoping that maybe this firmware version would do it. NOPE, still isn’t working more than 15 months after they claimed to add the functionality. Meanwhile, I have high school kids living across the street that knock my cams offline on a regular basis using the very well know de-authentication attacks that can be performed on any WPA2 secured network.

WYZE IS NOT A SECURITY COMPANY nor can anyone convince me that they give two poops about security!

Sorry for the trouble. The camera is not be able to connect on the network without password. Please connect it on a secured network and it should work. Thank you.