Wyze Cam v2 and Pan firmware 4.X.7.798 is releasing with experience and security improvements! You will need the 2.22.XX Wyze app to use the new firmware. Please check your app version under Account > About in the Wyze app. 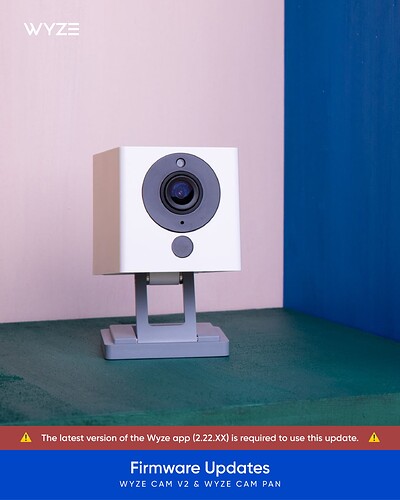 Can you tell us what “Improved camera stability” means?

That just refers to connection stability. Most people wouldn’t notice a change but we improved some edge cases.

@WyzeGwendolyn is there a way to have visibility into BETA firware updates? I use the Beta app and Beta firmware and don’t see how I can be a good beta tester and provide feedback without knowing what I am testing

is there a way to have visibility into BETA firware updates?

Do you mean release notes?

If so, then you have to look in the Beta forum post about the particular Beta Firmware, and in that Beta post they will tell us what to test for and post about in that thread. They don’t post it in release notes because they have so many iterations, many of which are sometimes scrapped when there are problems so they just tell us in the post what they want us to look for, rather than publishing release notes for them. If nothing is posted on the beta firmware, then we just do general experience and post if we notice something wrong during our everyday use (nothing specific).

And I think I’m probably an “edge case”.

This update bricked my camera. I followed all the instructions, updated the app and nothing. Very similar to what other users have been posting.

Nothing but a solid yellow light., I don’t plan on doing business with this company again, And now I need a new camera.

I’ve been using tinyCam to view my cameras. The update killed that. Now all I can get is a P2P Failed to connect error.

Subscribe to Beta for Tiny Cam, they provided a fix for the firmware update last I checked, but you might need to be in Tinycam Beta for it.

Sorry for the inconvenience. Do you have the camera in a “solid yellow” state?
If so, I would like to get the camera from you for more analysis and replace it with a brand new camera.

If you would like to do so, please PM your name, address, and email.

Firmware update indicates successful, but unable to view live stream from the production Android Wyze app v2.21.27. v2 cams are working as Events and associated notifications are being correctly generated.

Tried warm restart, power cycle, boot viewing device, log out and in from Android app… problem appears to be in incompatibility between latest firmware and production Android app v2.21.27.

Update: Looks like those who receive -68 need to ensure they are running latest Wyze app (2.22.xx) as indicated by @WyzeGwendolyn.

Most likely you can find an older firmware and follow this procedure to restore your cam.

Personally, v4.10.3.40 was as good as it got for cam pans. Not sure which model you’ve referenced.

Updated a Black V2 via account tab/firmware went without a issue, did a pan cam same way and it kind of just hung for a long time then said failed update, went to camera directly and it updated OK there just not on the bulk firmware list in accounts.

Now updating the rest of the Black v2’s (6) via bulk update,
One failed and multiple times, tried power cycling still failed.
Formatted SD which was full and then it finally updated.

Maybe they can just fix it and release an updated version. Should not have to get a Beta version.

I’m sure they will do this soon now that the Wyze firmware was released publicly. But it’s common and good practice to first release new software to be beta tested in order to make sure critical issues weren’t missed, then a little later release it publicly. I was simply recommending switching to beta if having TC functionality was time critical, if not, then it will be released on a public update soon I’m sure.

It partially depends how long it takes for someone to post about it in tiny cams forums or to their support. Wyze won’t care about whether their updates are affecting a 3rd party hack or not, so hopefully someone actually told tiny Cam.

Same here. I can still see my v3s but the update killed my v2s on my 4k firestick using tiny cam pro app.

This is the email for tiny cam pro. I submitted the problem we’re having. I also submitted a support log with wyze. Hopefully this gets fixed soon. I’ll report back once I hear something.

Not sure how to subscribe to a beta tiny cam pro app on 4k firestick? Only having problems with my v2s. My v3s are working fine. No issues with wyze app on my iPad or Android phone. Only 4k firestick problem with the v2s. Hopefully tiny cam gets an update soon. I shared the error codes with both wyze and tiny cam. I’ll live 1 way or another. Might be time to replace my v2s with v3s. I like them better anyway.