I have 2 gasoline/propane generators (not automatic though, yet) just the manual ones.
The Comms and Cams Battery lasted 21.5 hours before low voltage shutdown but I plan on adding another 100 Ah battery to double that run time.

The battery backup on Professional (non-Wyze) Ademco/Honeywell alarm system will run 7-8 days on the 100 Ah battery then after the 100 Ah shuts down the built in battery in panel last close to 24 hours. And that will still have internal cell path comms and landline active.

The Solar Driveway cams and motion spotlights vary on run time and most the time don’t run out except November to Mid-February due to lack of sun because of height of trees in forest and less daylight hours, plan to add another 100 Watt panel eventually. But even with Driveway cams down there are 14 more cams on the A.C powered and 21.5 hour battery backed up system.

Beer is not a necessity to me so I can go with or without it, just lately I have been drinking it a bit more because I am between work contracts so why not…LOL. But time for lunch and a few

And when A.C. Grid power goes down the Cellular modem/router sends and immediate text to my phone so I have 21.5 hours to get home and start generators.

The reason for 2 generators is for fuel savings $$$$ the little one 4000 watt is mostly used as it covers lights, refrigerator, fan for propane heater, and most household entertainment devices. Then the 15000 watt is used when I want to run Washer and Dryer, Air Conditioning, etc…

Considering your expertise, your endorsement of the cams (v3,v2,pan) says something.

Wyze, send this man a t-shirt!

I’m very happy with my Wyze cameras. Right now I only have 3 installed. They are all v2’s. Two are installed at a remote location about 10 miles away and of course communicate with that site’s wi-fi. They both have Cam Plus which has provided excellent event notifications. The third camera is local and actually installed outdoors under roofing eave. We’ve had several nights in low 20’s/upper teens and so far have not affected this ‘indoor’ camera. Still have other v2’s to install, but plan to purchase a few v3’s.

Apologies Everyone for taking this post off the main subject. (A.K.A. Thread Hijacking)

So to make up for that here is my Wyze-Cracker Scientific V3 vs. V2 Audio test. Highly scientific as I used shipping tape to mount V2 next to V3.

@peepeep & Wyze - I would rather have over a t-shirt the new upcoming Wyze product nicknamed “The Wyze-Crapper” a Wyze WiFi Bidet although a firmware bug might scare the crap out of me.

I am satisfied with mine. 3 perimeter and 1 garage. 3 are the original Wyze and 1 is a V2. I have 1 SD card installed and 1 CamPlus subscription. I’ve been too lazy to subscribed the others, or too cheap, I haven’t decided. My doorbell is a Ring and I have a ReoLink with a solar panel on the exterior of the garage. Just like tinkering and our neighborhood is very safe, because we live in an Adult community. The surrounding community is hit regularly by catalytic converter theft and the occasional unlocked car theft. Our biggest problem is door to door phony repair people and occasionally catalytic theft too.

Wow. That reminds me of some of the systems I’ve seen in sketchy places like Mexico or South Africa. Here in Maine about half the cars in WallyMart have the keys in the ignition and the other half have the keys “hidden” under the seat. 99.9% of car “break-ins” involve unlocked cars. Front doors are rarely locked. I’m more worried about snow on the roof

Nothing sketchy about where I live, I am in the middle of the Eldorado national Forest, I am just an Telecommunications / Electronics Engineer and an IBEW union electrician with time on my hands when between contracts, mostly government and some private contracts.

Living over 40+ minutes from main town where Sheriff station is at, Is one reason for having good security. The other reason is I am a Security Nerd Extraordinaire…

I can and have left car doors and work truck accidentally unlocked with no issues, my work truck usually has over $200K in tools and parts in it and nothing has ever happened, but still when I realize it was left unlocked it bugs me as away from home I do work in sketchy areas and locking things up is a good habit. All my doors at home are unlocked unless I leave the property or go to bed and I always have one of many weapons nearby or in my holster. We do have bears, coyotes, mountain lions and more here in the forest. But the best targets are the wandering thieving Meth-Heads (Just Kidding on the Meth-Heads they are in the valley but I do CCW on the job)

Yes, very. I’m not a can plus and I’m still enjoying super reliable service from my many cams and door bell.

Excellent products. Disappointed with the watch and support for it.

We’ve had several nights in low 20’s/upper teens and so far have not affected this ‘indoor’ camera.

I have a v2 magnetically attached to the underside of a window heat pump. The v2 survived the record low single digit temperatures we had here back in February, while the fan bearing on the heat pump itself didn’t fare so well. (It’s been noisy ever since)

The Smart Plugs, Doorbell, V1 Scale and HandVac are OK…Lamp, LED bulb, OutdoorCam, 47mm watch have issues…Cordless Vac still reviewing with the Security system I dropped off to Goodwill.

[mod edit]. All your messages are trashing the company. Stop buying their product and move on. You are hurting yourself with the constant negativity.

There is a good life to be had out there. Have a great life.

Go for it.
But doing the same thing and expecting a different result doesn’t tend to work.
I learned to wait for unbiased reviews before buying.
Cheers

On the V3 cam some are having issues with audio and I have posted in the post
No more dancing around it. Can you fix audio issues with Wyze v3 cameras? <— Click Blue lettering link to see my unbiased review.

Cheers, I am down to my last 2 beers for the weekend

It’s a real issue. Been around for years. 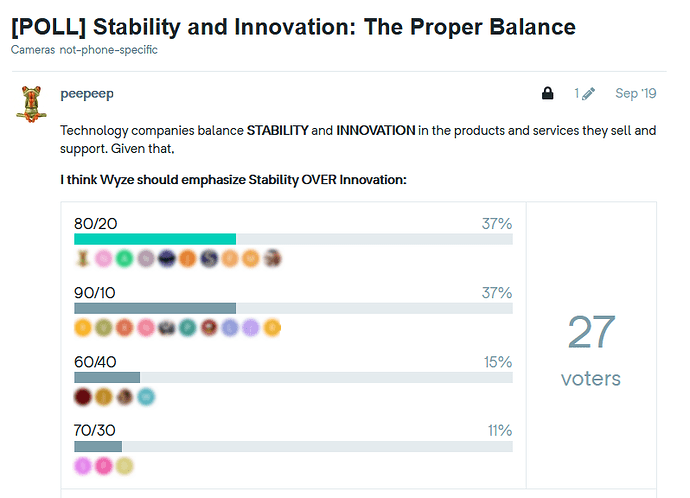 Informed and thoughtful criticism (should always be) welcome. How else can things improve?

Stability and Innovation: The Proper Balance

I like seeing that some of you like the Wyze cameras. I was a bit stunned by the number of complaints on the forum. So far, I am having some success with the WCO and V3 that I am trying out. I am not using the for security. I am using them to monitor bird feeders and other active wildlife sites in my yard. They have proven better than others I have tried because they have been rained on for several days and are still working. The battery life on the WCO is better than on the other small cameras I have tried. I an still having trouble with the app not downloading to the SD card. It downloads to the tablet internal memory, which fills up quickly. All of my settings are correct. The Wyze App is the ONLY one that will not default to the SD card. If I can work that out, I may get another WCO or two. I have also just got a couple of color bulbs to experiment with.

For OP @KayTel (with their permission)

Regarding Wyze cameras, I am satisfied with:

The BEST Wyze camera is:

The WORST Wyze camera is:

1 Like
[POLL] Is Anyone Actually Satisfied With Their Wyze Camera?
Detection Zone Turned Itself Off
So sad about the quality and reliability of my Wyze events recording
peepeep November 7, 2021, 6:19pm #79

But they provide a good platform for critical feedback and they do respond quickly and substantially to issues their data (I guess) informs them are most important to their full customer base. I’ve seen them do it four or five times.

Are these cameras ‘disposables’, ‘cheap Chinese junk’? I have used only v2 cams and the original bulbs and plugs. I wouldn’t rate them as disposables. They are probably at least ‘middle quality’ sold at disposable prices.

To give some context to the term, Harbor Freight sells a lot of ‘disposable’ items.

And on the other end, while this is e-waste, it wasn’t designed (or priced) to be ‘disposable.’

I actually setup a friends property further in the forest with several of them as dummy cams to scare off intruders, even used UV resistant white Ethernet cables down trees in to dirt then nowhere for notice-ability.

There is no power there and he did not want to or could afford a solar setup and monthly cellular costs so I set him up with a dummy-cam system that has eliminated the intruders on his 40+ Acre property which had direct access to the South Fork of American River hence the intrusions.

I setup him up for free as he served his country well and is a Vietnam Veteran, so he got my e-waste…

The cameras look at gate, and parking above gate on road, and down road on other side of gate.

“If you’re reading this you are in my gun sights, F**k Around and Find Out” … LOL

Eventually when I get some e-wasted solar panels, solar controller, batteries, DVR and a monitor it will be live to his home, just not on the cellular part for cloud recording and remote viewing while away. But he hardly leaves his property so it will be locally live and recorded on DVR in a few months or so,