Have had ALL my customers whom needed WiFi mesh systems on Orbi Mesh systems.

This is an older now obsolete version of the Orbi line of Mesh WiFi systems.

Looking for opinions of other Mesh WiFi systems users and their experiences and suggestions as to new best choice for this customer.

Since the older Orbi a lot of new Mesh WiFi systems have come out and I’m looking for input from other users.

Thanks for any recommendations

I had issues with my orbi mesh and ring. They just did not like one another and I was having major problems with my ring products, but it worked great for other iot brands.

I’ve had zero issues with eero. And set up was a breeze! I really like the eero mesh app interface and how easily it worked with alexa.

Sitting here in my Costco underwear and Costco tube socks communicating over a TP-Link Deco M9 Plus picked up at Costco as a 3-pack for $200 (which just outside the price match period for me they put on sale at $160) and just like with Wyze:

It works better (paradoxically) in my particular environment with 2 units active versus 3. According to TP-Link, the toggle within their app to ‘anchor’ a device to a particular access point is only a suggestion - the device can override the router if it wants to. And v2’s want to, if given any opportunity whatsoever.

So that’s a PIA. They choose to migrate to an AP where they stream poorly. WTF. Ok. I’ve got other things to do. Change the resolution on the cam to 360p and be done with it.

FWIW, @spamoni4 says his TP-Link mesh thing didn’t stream so good until he deactivated the onboard security function(s). He has something he likes better now.

I want to add, I had to turn off a setting in eero for WPA3 because Wyze doesn’t work with that.

Sitting here in my Costco underwear and Costco tube socks

BTW, this is just for ‘color’. I’m very hip, sock and underwear-wise. 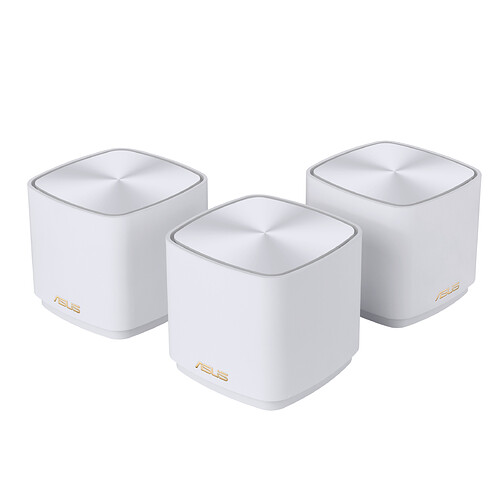 ZenWiFi Systems blanket your home with WiFi, for seamless roaming with no dead zones. They only take a few steps to set up, and offer easy, hassle-free management. Their modern design blends with any style of home.

ASUS ZenWiFi AX (XT8) these have worked great and performs way better than my TPLinks.

If I get another one before I die, I’m getting what you got. Such is your cred on the boards.

Thanks. I like the TPLinks as I have my in-laws, and kids using them, One word of caution, if you turn on Trend Micro’s monitoring, you may cause a bigger issue if you enable the two-way IPs. This causes some issues with how communications are done with Wyze. You may only see the Trend Micro settings if it is setup as a router.

I toggled on and off everything I could (including QOS priority status for devices and security functions except for website sniffing) and observed. There was no indication to me that enabling anything made any difference whatsoever. Which reminds me of some of Google’s Android switches.

But of course it could just be me.

My issues woudl start when there was at least 3 camera’s, I believe, in a Live Event Recording, then I would try to live stream one of the camera’s to see what is going on and it would never connect. Once everything settled down it would work.

In reading a bunch of articles and watching Youtube video’s it became apparent that some of the issues were related to the Trend Micro. However, I also read an article about TPLinks and how it does the streaming. It indicated that TP-Link, although a great device, has issue when there is a lot of stuff going on with your network. Also note, the issue only affected my Wyze products, which was the most puzzling piece. I like the devices and still have the x60 boxed up. Bit nice.

It indicated that TP-Link, although a great device, has issue when there is a lot of stuff going on withing your network.

That would be my ‘sense’ after using it for about a year.

Which brand is the deserved reputational leader in consumer and ‘professional’ categories, respectively?

Guess if that could be easily answered the choice would be clear (if price was no object.)

Had the buzzword ‘prosumer’ in my head without knowing precisely what it means (beyond pro + consumer.) Is it a useful term?

For years, I used Open-Mesh mesh based access points. I had two networks running at the house. One of them was 2.4 GHz only and that is what the Wyze cameras were on. Unfortunately Open-Mesh was bought by a company called Datto who is a managed service provider and they are doing their best to kill off the end use owned networks. I fully expect that they will be turning off the cloud based management for them - at which they become doorstops.
As a result of that, I am now using Meraki Enterprise access point. They work very well, but both the cost of the devices and the required cloud management is above what most “consumers” would want to pay.

Thank you Everyone for your suggestions

I was able to disassemble the broken Orbi master unit and replace SMD IC that was bad.

Happened to be a common LAN SMD IC, found one in my parts pile…

I run a Linksys AX4200. it is a fantastic system and I have not had a single connection issue since this upgrade. but it might be a wee bit expensive understandably for some. but thats the catch22 with technology. you get what you pay for.

Two or three units? Was it a ‘forgiving’ implementation as far as AP placement? Can you ‘anchor’ a device (like a cam) to a particular AP so it does not wander if nearly equidistant from another AP? Thanks!

This is 3 units, I thought it was rather forgiving I didn’t have too many issues at all. But it is far more than I actually need for my home. This thing based on where I placed it I can get Wi-Fi at all my neighbors houses I can even pick it up for a little bit down the block. Rather impressive but I don’t live in a very congested area either. I’m not sure on the anchoring. I had read that it lacks a lot of the abilities of other systems but it works so well on the initial setup I have set static IPs for a few things for testing and just a few other minor things. Everything else has been working fantastically.

I’m using an Orbi RBR750 mesh system (1 router, 1 satellite) at our main house with a 2 Ring cams, 4 Wyze cams, 3 Wyze outlets, a Wyze thermostat, a Schlage wireless deadbolt, and a Simplisafe alarm system. They all get along just fine, and all work seamlessly. Our internet service is Comcast 1.2gb.

At our vacation place, we are using a Google Nest Wifi AC2200 Mesh System (1 router and 1 satellite), with 3 Wyze Cams, 2 Wyze outlets, a Schlage deadbolt and a Simplisafe alarm system, on Cox internet 750mb service. They all work just fine, too.

How dense is your neighborhood, ie, single family homes on big lots, or multi-family complexes with plenty of units?

I live in the latter, 17 units 20 feet away, and most probably each unit has a wifi/router, and some have teched-up to a more powerful unit or mesh, so my potential for erratic performance from signal interference and channel congestion is pretty high.

In my situation, I’m convinced I will never be able to perfect reception, so I live with ‘pretty good’ that sometimes degrades to ‘fair.’

The house with the Orbi is in a neighborhood of single family homes on standard sized lots. My place there is a single floor of about 1400’ sq feet. The Orbi Router is at one end, and the satellite is about 2/3’s of the way to the opposite end. The place with the Google Nest system is in a pretty dense condo complex. It is a two story place of about 800’ sq ft, with the main unit on the first floor and the satellite on the second floor.