Is frustrating. Is a different wyze company than what i was used to in expecting from.

Most of the solutions or ideas are very simple to implement. Dont understand why they take so long, especially that this product compete with other brands.

I did today the survey that they have when you go to the monitoring system settings and at the end it shows some of the products that they are working. Obviously non of the option was something related to our issue with siren.

Some of the options are good, but all needs too much time to implement. Whats so hard of adding a actual product that just turns on/off and make it trigger when alarm activates? If you have the wyze bulb as one of the new possible options and say that it will flash or change color to red when alarm triggers, then what what i mentioned above is a piece of cake.

This is a issue that been brought from the start of this project. Stop wasting time in implementing more stuff that pertain to a small group and work on issues that the Hub lacks on since the launch of this product. A system without a good siren, its nothing. Lets not talk about the monitoring service, since this is another subject.

This problem has persisted nine months already and no fix? Volume is still too low and no auxiliary siren triggers! C’mon Wyze, you can fix this!

Too busy working on new products, like the Wyze connected hairdryer and smart trashcan.

I own a Wyze Home Monitoring setup and my family was just talking about the alarm siren volume being significantly quieter than our previous security system. I too would love a LOUD siren (>=120dB), please!

I saw this another forum thread:

Is it really that hard to just add rules to the hub to trigger the V3 alarm on then off or a Wyze smart plug? They already have it set up for the sensors!

MtnMan,
I have been asking for exactly that (rule for Wyze plug to activate an external siren) for the last 6months and have never even received a response. My guess is now that they have our money they don’t care! So sad

I just came across this in the survey page. So maybe some help is on the way. At least if I could buy several chime alarms and place them around my property so the siren could be heard would be a great step. 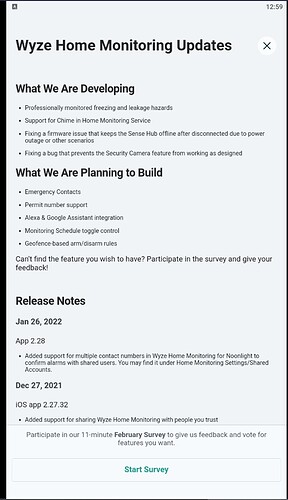 I’d love to be able to have the Alexa devices throughout my house play some loud music or an alarm noise when the siren is triggers on my sense hub. I suppose this might be possible through the “Alexa & Google Assistant integration”

This thread officially saved me from buying the system. Without a loud, functional siren built in to the system, this is a “no” for me. A siren is an absolute must for interruption and notification of home invasion while we’re asleep. Hard pass. Wyze, you just lost a customer.

Not sure if you have seen this thread topic, but this issue with the decreased siren volume on the hub was reported in September 2021. The Firmware update in that same month DECREASED the volume. It used to be loud enough to wake me and scare off an intruder. See the first thread link below.

Also, this was brought before the Wyze hearing board In Fix-it Friday as well and received considerable support from the forum. Wyze responded (second post link below) with the explanation that it is a “hardware limitation”. They have stated they are working on an ancillary remedy. Browse around over in those two topics for more info.

Hope this helps! Be safe and well

HUB SIREN VOLUME STILL LOWER THAN IT USED TO BE Last Fall, around September, the Hub Volume dropped considerably from a firmware update. The High volume seemed to be at the level the Minimum was before…very, very low. On October 18th firmware 4.32.6.142 was released intending to fix this issue. Per the release notes: Fixed a bug that caused a decrease in Wyze Sense Hub voice prompt volume from last update and while some things had volume restored to higher volume levels, such as the entry …

The low volume is due to a hardware limitation. We’ve heard your feedback and are working on supporting Wyze Home Monitoring audio on Wyze Chime. This will allow you to decentralize the audio and have it in the rooms that you care about. We’ll share information about it when it’s ready!

Thanks for not giving up on this Slab. I gave up on the monitoring system and returned it for a full refund. This was after receiving a brand new hub which exhibited the same low volume issue.

I am still hopeful the problem will be fully fixed one day, it’s only right.

I have Wyze home monitoring and am very disappointed in siren. It is not nearly loud enough. I have recommend wyze monitoring alarm to friends but told them to wait until louder siren is available.

Yeah, it seems to be an issue that Wyze cannot solve or will not solve due to some untold “hardware” limitation. It is a highly suspect reason when the hardware wasn’t limited before the September software update reduced it. I have my own theories, but that is unsubstantiated speculation.

At any rate, they have proposed external chimes. Meh. I would prefer an external remote outdoor or attic siren.

There seems to be a security \ accessibility issue with the hub because Wyze has consistently kept this device completely isolated from the rest of their ecosystem as it pertains to rules, triggers, and actions as well as Alexa or Home. I am guessing adding chimes or a siren are problematic to this historical systemic isolation as well.

At any rate, they have bigger problems since their last update bricked or fubar’d a great deal of hubs. I’m fearful of touching mine or adding anything as they have now begun to pull affected units back in for forensic autopsies. I’m just watching and waiting for now. But the volume still sucks.

But, there is one workaround I am going to try. A bit more clicks than just arm and disarm, but it is really an Ingenious idea. Give it a read:

@ken63 and any others trying to add an external siren: I found a way around the problem of how to arm/disarm it without having to go in and change multiple sensors every time - see below. It’s a bit clunky and is not integrated with HMS, but it does work! Attach a loud external alarm to a Wyze Plug (let’s call the plug “Siren”). I use a 12V Honeywell siren & 120>12V adapter that I got on Amazon. Plug “Siren” into a second Wyze Plug (let’s call it “Alarm Master”), and plug “Alarm Master” into …

I would return the product for a refund if you’re not satisfied with the volume. Wyze has spent almost 6 months knowing this issue and has yet to resolve this glaring issue. That’s what I did with mine. Though I haven’t seen many others do the same by returning.

if you just bought your product and your are reading this, returning it with the dissatisfaction of volume being too low would hopefully make Wyze eventually realize where there priorities should be.

That is an **Awesome ** solution! I already have a loud siren from Amazon but have to Enable/Disable each sensor. I’m going to try to implement your solution to make it a one time process to Enable/Disable all sensors in one step.

Vivint has an outstanding alarm from their base unit. I left them to come to Wyze. Not happy I did.

Wyze Sense Hub volume is lower than it used to be

We have a firmware update in beta and we aim to release it in the next couple of weeks. It does adjust the volume but we need to be careful with this so we don’t have the hub set to blast at full volume at all times. We can’t guarantee that this will address all the issues but we really want your feedback when you get the update about how this impacts you and if there are areas you still want us looking at.

Is this really true? When will the beta version be released?

We have a firmware update in beta and we aim to release it in the next couple of weeks.

A friend just tested their hub with the latest beta update 4.32.9.249 and reported that the volume is significantly louder now.

So based on that I believe there is a change with the latest Hub firmware beta 4.32.9.249 and that Gwendolyn is saying that if everything goes well in the current beta track that it should be released publicly to the production track in a couple of weeks.

As always, be aware firmware is labeled “Beta” for a reason as it indicates there could be additional unforeseen issues they want to verify or resolve before going public. For most people in general I’d recommend waiting until the official public release, but anyone interested in the beta is allowed to enroll and install and test it out. If you do, please provide your feedback on it as was requested, particularly in the beta thread for that firmware or the latest fix-it-friday thread.

I am happy progress is being made on this though.