I was searching for tests people may have run related to the Original Wyze Scale, which I have owned and been happy with for several years, and up came this new article from CNN last updated Jan 3th 2022.

Over the course of a month they tested 8 of the top-rated/most-popular smart scales and checked a ton of things about them including how accurate the weigh-ins are, how well they work overall, etc. They consulted a sports medicine professional and even compared everything to professional analog scales, and held standard extra weights (ie: 10lbs dumbbell or whatever) to see if it was still accurate with the added measurable differences, and conducted weigh-ins at consistent times and all sorts of things.

Their ultimate conclusion is that the WYZE SCALE was both the BEST smart scale and the MOST ACCURATE smart scale, despite being one of the most affordable smart scales!

That’s incredible. This is just a testament to why I love Wyze products so much. Here are some quotes from their findings and their report:

Ultimately, one [scale] held its weight above all others: 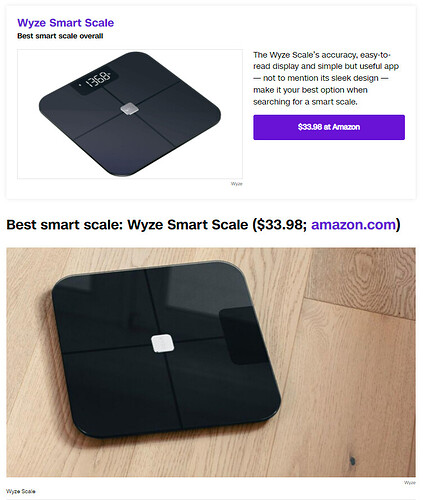 … Best smart scale: Wyze Smart Scale…
…we were immediately sold on its simple good looks. The design of this scale is on par with several we tested that were far more expensive…
…Wyze Scale was lighter and easier than most to move around as we completed the setup process, one that was extremely straightforward…
…The Wyze scale…proved to be one of the most accurate scales we tested in terms of weight. Comparing it to readings on an analog scale, the Wyze was never more than 0.2 pounds off. In comparison, some of the other scales, like the Fitbit Aria Air, varied by up to a pound. Additionally, when we stepped onto the scale holding a 10-pound hand weight, the readings jumped exactly 10 pounds…
…With the Wyze scale, we didn’t encounter any strange fluctuations day to day indicating we’d gained or lost multiple pounds over the course of 24 hours…
…it was simple to track our weight over the course of time…
…The app itself was very easy to use and read…
… the Wyze scale will send your information to multiple apps like Apple Health, Google Fit and Fitbit…
…The Wyze Scale’s accuracy, easy-to-read display and simple but useful app — not to mention its sleek design — make it your best option when searching for a smart scale, especially considering its relatively cheap price of $33.98…

It should be mentioned that most scales will have a little a bit of fluctuation sometimes. This can vary depending on where you stand on the scale, how you place your weight, how much you move as you stay balanced and breathe and slightly move, etc. This is all pretty normal, even using professional analog scales you can often see this to some degree. All scales have scale tolerance ranges of variation. Some scales fudge their readings to make you THINK they are more consistent…some will average out their readings from previous measurements or if the current reading is close to the previous reading, they will simply lie about their actual measurement and just repost the previous close measurement so you don’t get upset there was a slight variation. I specifically chose the Wyze scale exactly because of how precise it was and how it didn’t fudge with the actual measurements, etc like some other scales do. I could never trust scales that did that because you could hold something that has a small amount of added weight, and those scales will just lie to you and tell you the previous measurement because it is close and doesn’t want you to be upset that there is a difference. I loved that Wyze always told me precisely what it really measured…and now here is a group who ran some more detailed tests and comparisons and found Wyze was also the most accurate scale out of lots of the highest-rated and most popular scales on the market. That is just awesome.

To me, Wyze has kind of changed the meaning of the quote “You get what you pay for”…while that statement will almost always be technically true in some way or another (obviously you get what you pay for)…in this case, Wyze has proven that more affordable price doesn’t actually mean worse quality, nor more expensive meaning better overall quality…but rather it can now seem to just mean that you can spend more for something not as good and now have less money for other things. Thus making “getting what you paid for” could mean you get a slightly worse financial situation (though admittedly negligible in the case of a single smart scale, but worse in a long-term pattern) and fewer smart devices you could’ve otherwise had. That’s how I’ve been seeing it. To be clear, I respect others’ opinions and I fully support other people going with competitors so there continues to be good competition with price innovation occurring in the market.

I even have and like devices from some of Wyze’s competitors, myself. But I always seem to find myself coming back to Wyze as my primary smart device company because they keep proving themselves to me over the long run.

To be clear, I do not work for (am not employed by), nor speak for, nor represent Wyze in any official capacity, The above comments and opinions are solely my own and were instigated from my own personal impulse. I am just another Wyze customer and forum user who loves my Wyze products and thankful that Wyze offers great smart products at affordable prices, disrupting the market so I can have more toys than I otherwise would. I fully support their mission objective to make great technology affordable to everyone and felt this helped demonstrate why I am so enthusiastically supportive of the company in the general, and I thought some others might enjoy the 3rd party validation as much as I did.
2 Likes
Wyze Scale S - Smaller Frame. Bigger Punch! :facepunch: 9/30/21
spamoni4 February 11, 2022, 11:03pm #2

I have the original scale and have found it to be a great product.

I really like my Wyze scale too. I wanted to make this post to include as a reference for the future since once in a while I see users post something about how their Wyze scale is giving a different reading than their other scale. Now I have something I can point to ask if they are sure it isn’t their other scale that is the one with the actual accuracy problem.

Hmm, sounds like it would be useful for large batch bread and pizza making.

LOL I think a kitchen/food specific scale would be a bit better suited for that. Their tolerance limits are better than these larger scales designed for humans. But I guess it depends how big of a batch you are really talking about.