Wyze Plug CFH (2022 Version) has an update today! Version 1.2.0.236 improves the accuracy of schedules and the high temperature warning. It also fixes a bug that caused schedules to execute a day off from when they’re supposed to. 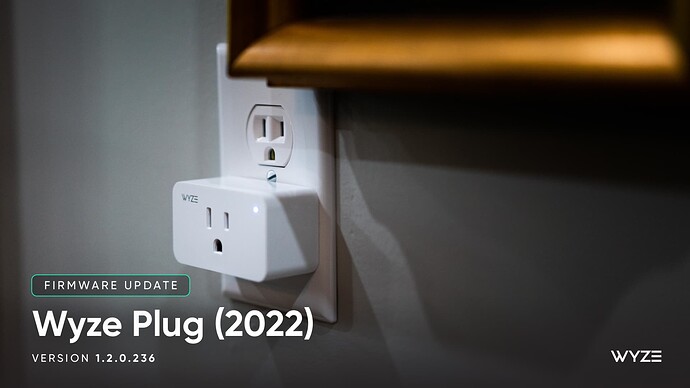 I think this is the first public announcement indicating there is a 2022 version of the plug.

I am guessing that means if anyone has ordered an indoor plug through Wyze for the last few months, it’s likely the 2022 plug.

The 2022 plugs I have are incredibly reliable.

I didn’t realize it had this feature:

Does that mean it will send us a notification if the plug starts to get hot, or that it just shuts off, or what? Seems like a cool update! I use this plug to turn on an indoor space heater (only when I’m present in the room, and automatically turn off when I leave the room, so that the heater is never on when I am not there). It’s never overheated, but it works REALLY well.

Does that mean it will send us a notification if the plug starts to get hot, or that it just shuts off, or what?

The 2022 version of the plug supports temperature warnings. This means if you are using it with an appliance you shouldn’t be or if there is overheating of the plug you should get a warning notification on the app and the device would be turned off for safety.

That’s so cool! I didn’t even realize this! I kind of want MORE of them now!

I don’t have any plugs (I already had plugs from kasa/tp link before wyze came out with theirs) but now I, too, am considering swapping them out for Wyze ones.

@Jason-L what about the 2001 plugs? Will we see a FW update for them soon as well?

@shoehn
I am guessing you meant to say the 2021 plugs. We are working for a firmware release for those now, it went into beta today.

One option is to look at the back of the plug. Under the Model number, the 2022 version says:

The app will figure it out and update it with the appropriate version.