“For now”. The catch is you never know when a firmware update will require the latest app. Wyze may not even be able to tell you, as I doubt they will be tracking that. So at some point, 2.22 may break with a newer firmware update. At that point you may be able to manually revert the update (if you have a camera), but you may also need to buy a newer device to get everything working again if you can’t.

So firmware updates are not really recommended if you want to keep using an older device.

I agree with your assessment. I have already hit the ceiling on the App. At some point soon, perhaps very soon, I’ll conclude that I should no longer update the FW on the V2 and Pan cameras and freeze them at their then current FW. When that happens. it’s time to consider a different device.

I just tried one of my elevated cams, which are only accessible via a ladder. I got messages that the update failed. Then, the camera showed as offline. After unplugging the cam for 1 minute, the cam then worked normally. The cam now shows 4.9.7.798 #headscratcher

This update completely ruined my v2 camera, and of course that comes 2 months past when my warranty expired, so no luck with refund or replacement. I tried everything Customer Service suggested, so please don’t suggest a factory reset or flashing the firmware back, none of that changed the never-ending solid yellow light on the camera. The camera worked perfectly well until this update. Just came here on the off-chance that anyone is checking to warn them not to download this update,

Yes @Ipil60R34s and good idea to wait a week or so to see if there are any issues with new firmware.

@RNeely26 I know the .798 was recinded for a spell. When you say “flashing back” are you saying you performed a Manual Flash? https://support.wyze.com/hc/en-us/articles/360031490871-How-to-flash-firmware-manually

Important: Known Wyze Cam V2 issue
A recent update for the Wyze Cam V2 is causing a crashing issue. This can be corrected by force-closing the Wyze App and reconnecting to the affected V2 Camera.

Yes I tried performing the Manual Flash and it did not fix my issue.

I’m having the same issue with the pan. Tried multiple ways to update including via flash drive with no success. Any assistance appreciated.

Hi. Sorry for the inconvenience. May I ask what is your App version? If your App version is up-to-date, what is the error code and LED status when your pan can’t connect? Thanks.

Here’s the pic of the back of the cam

I tried the update and it stopped working altogether. I then followed the instructions using an SD card to reboot and still no progress. The light is yellow if I plug in normally. If I hold the reset button with the sd card in, it goes blue/yellow but never goes to flashing yellow or any other color.

Thanks for any help you may provide 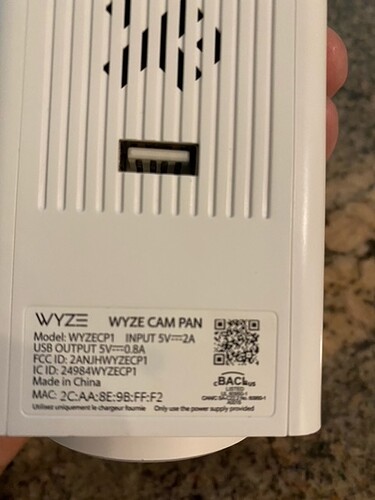 My Pan Cam (WYZECP1) bricked a couple nights ago when I tried to update it from the Android app. I’ve now got it on my desk and tried updating from microSD, both the latest release and the previous and the yellow light stays solid after the brief yellow/blue combo. No sound or motion like a normal boot. I also tried the factory reset, holding the reset button for 30 seconds and waiting a couple minutes and nothing happens. The light remains solid yellow. No log files appear on the card.

Same here. Ruined my camera! I should’ve gone with a Ring.

Having the same issues since update. No of the troubleshooting steps have resolved issue. Last night it was suggested that I have go get new cameras. Losing faith in wyze as well.

I engaged support in chat and they’re replacing the camera, even though it’s out of warranty. I’m still hoping this can be fixed, though, the way NASA can fix unexpected problems with space probes millions of miles away.

I know how hard it is to design this kind of thing, as I’ve done similar designs myself. Making firmware updates bullet-proof is hard, even when you’ve got the product on the lab bench.

To be fair though, if a company does a beta test on a firmware update and it bricks a bunch of the test cams, then they should try to fix it and then issue a NEW public beta test and see if anything else bricks. In this case, Wyze did a single public Beta, and the firmware bricked a bunch of cams (and told a bunch of others it failed), so they already KNEW that firmware had big problems. They presumably made some fixes to it, but then instead of doing a second public beta to make sure (as good QA would call for), they just went straight to full massive public release, and now a bunch more cams bricked. Wyze instead should’ve done a second public beta first before risking everyone else’s cams on an untested public release. They knew there was an issue with the beta, and rather than verify they fixed it, they just went straight to public, which was fairly negligent from a QA standpoint. To Wyze’s credit though, they have been replacing several cams for people who had problems even when they are no longer under warranty. For this they are to be commended for doing the right thing under the circumstances. Many companies would not do this. Perhaps this is why Wyze decided to go straight to public instead of another Beta, maybe their test showed that statistically there were fairly few problems, and so even though there would still be some cameras bricking, a cost-benefit analysis might have resulted in the conclusion that replacing the few bricking cameras (even those out of warranty) was better overall than trying to recode the entire thing to figure out what the problem was. I’m apt to assume this is what happened. I’ve seen it before.

Regardless of what the facts are, and which condition is correct, I have been pretty happy seeing their overall response to the issue: Communication from employees in here, offering to replace cams out of warranty that were directly affected by the “update,” etc. Honestly, that’s all a very reasonable and great response.

I’m glad to hear yours is also getting resolved, even from going through regular support, and not just from DM’ing the employees in here. That’s a great sign.

My company strongly takes the position of driving problems to root cause. But we do industrial automation, where a bug can maim or kill people. This is why most companies forbid the use of their products in health care settings. Buy my background makes me want to jump into the camera code to dig out the problem.

Guess I should have fought them harder. They offered a measly 15 dollar store credit to me. As a warning to those out there, apparently you need to keep pushing back to get them to live up to the decent thing to do in fully replacing the bricked cameras. I plan on being a pain for customer service all over again to get them to fully replace it.

Wyze, are you ever going to fix the pink flash issue with V2 and Pan cameras?!

Interesting. Your experience is the closest parallel to my own that I’ve read in this thread.

After a 2.5-year long history of Wyze firmware & app beefs, this update actually seems to have applied as expected and has IMPROVED my Cam Pans’ performance. All updates I’ve attempted in 2021 have abended in the app and left my Cam Pans able to record clips but broke live feeds (effectively BRICKING, as many others have described, requiring manual reversion to restore functionality).
Furthermore, the previous firmware left my Cam Pans unaware of their installed microSD cards. I observed during this most recent update that my cams were SLOW to recognize they had microSD cards installed, but they DID become aware of them after a few minutes. Also, all of my Wyze Sense v1.0 stuff showed offline for a bit but eventually came into service.

Besides the clumsy update failures, the #1 issue for me has always been loss of motion-based event detection & recording. Haven’t quite been on this version 24hrs yet, but both updates registered SUCCESSFUL in the app and motion events ARE being recorded. I’ll also say that this update resolved slow feed response when panning using recent app versions. No doubt that was due to old firmware mismatch w/new app.

Not quite ready to update my parents’ (11) cams since they live a long way from me, but, barring any regression with mine, I’m planning to test the waters during an upcoming visit. I’ll post any results here or in future firmware update threads.

EDIT-1: Decided to update (9) remote cams since I’ll be visiting soon. All (9) went like clockwork and it feels good to be current for the first time since early 2019! Operation seems to be good all the way around. microSD cards eventually registered & panning feed / performance improved per the experience I described above with my own Cam Pans. Also observed better audio performance. The past few years’ experience has forever made me cautious about firmware, but this most recent version seems to agree with all of my stuff.