Periodically a Wyze V3 camera will stop working and require that power be cycled to it. This is absolutely ANNOYING and FRUSTRATING to the user. You HAVE to buy a Smart Plug for EVERY Wyze camera you buy. This is a FIRMWARE problem in the Wyze camera. Please FIX THIS problem. Thank you

Luckily in over three years of being on constantly, I have not seen this issue on v2 and v3 cams. I have experienced many other issues. Mostly with video playback or lack thereof.

Since I upgraded my router to a high powered long range device with an extender, I have also not seen any resets required, even after firmware updates. I concluded that most of the offline issues I experienced were WiFi insufficiency based, whether it be too many devices on a slow router, lack of signal from a weak router, extended distance from the router, or high 2.4GHz band traffic interference. I don’t believe it is a Firmware issue. Perhaps a weak WiFi antaenne in the cam though.

Additionally, I have set my security positioned cams as Priority devices in my router so that they cannot be deprioritized during heavy 5GHz streaming usage.

I also have smart plugs on every cam. I would actually do this even if the network online uptime was rock solid indestructible. I have my cams power cycle on an Alexa routine every night to get a fresh restart and network connection during low network usage times. There aren’t very many IoT devices these days that don’t benefit from a fresh restart.

You said that " I upgraded my router to a high powered long range device with an extender"
I would like to do the same. What router did you upgrade to.
Thanks in advance for this info.

I’m not endorsing this product for you because it all depends on the size of your physical layout and the number of devices you want to connect. I had a really old router before. The one I got is also already out of date as they have come out with better mesh routers since then. It also depends on how pricey you want to go.

There are users here in the forums who have installed much bigger, better, badder mesh routers with similar improvements in their IoT stability.

Most of the @Mods and @Mavens are using some heavy duty broadcast systems. They can also ring in here with their experiences.

Thanks for the info.
I have looked at a lot of routers on Amazon, but EVERYONE of them had some kind of problems. I don’t want to fool around with complicated installations or router drop outs.
the ones I looked at on Amazon had one or both of these problems.
I want one that “Just works !!!”

What brand and model router are you using?
I would buy anew routers but EVERYONE I looked at on Amazon had a drop problem or was a pain to install.
I am willing to pay premium for a router that “Just works !!!”
If I replace my router, can I use the same name as my current router so I don’t have to re-install all my wifi devices?

Stability is a priority. I tagged the mods and mavens who are IoT Jedi Knights. Give them some time to ring in here and offer some alternatives. Many of them have used multiple brands and can provide some experience.

… And yes. As long as the new router has the same SSID name and password, the Wyze IoT will never know you replaced the mothership.

Thanks.
I look forward to the Mods and Mavens to check in and give me their advice.
From my ISP I get 400GHz Download and 20 GHz Upload.
I need a router that can handles a lot of individual devices on it.

I have set my security positioned cams as Priority devices in my router so that they cannot be deprioritized during heavy 5GHz streaming usage.

5 Ghz? How does that affect Wyzecam traffic?

have looked at a lot of routers on Amazon, but EVERYONE of them had some kind of problems

What brand and model router are you using?
I would buy anew routers but EVERYONE I looked at on Amazon had a drop problem or was a pain to install.
I am willing to pay premium for a router that “Just works !!!”

That is not how technology (or life) works. Nothing is perfect for everyone. There are SO many variables, as Slab implied, especially with these low powered radio transmitters that we’re all using. If you’re willing to pay a premium, you can consider having someone install a basic wired surveillance system.

All that said, going with a well reviewed / recommended model is a good start.

Costco has a 90 day return policy on electronics (including routers) so it’s worth considering as a source if you happen to be a member.

The trick is to give the installation a reasonable effort and time to adjust and after that if it’s causing you grief box it up and take it back.

I used to use the TP-Link Deco P7 and then the Deco x60’s. Both of these had issues with streaming when activity was happening on multiple cameras. I would have to continually restart my Cameras. I found a post which indicated TP-Link Deco’s have an issue with managing real-time streaming of multiple devices. True or not, this added to my decision on changing my router. I ended up getting the ASUS ZenWiFi AX (XT8) Mesh setup and have not looked back. It worked from the start with no tweaking and continues to function. My Notifications are fast as well as connectivity.

I use Verizon FiOS Gigabit connection and was using the Quantum router as my entry point to the Web. I removed that and connected the ASUS direct and now I am using it as my primary setup. No regrets and quite impressed with the features and functionality.

The ASUS has 2 devices and seems to cover a larger area than the TP-Link Decos which has 3 devices. @carverofchoice also switched to the ASUS devices and I believe he likes them as well, but I will let him speak to that.

5 Ghz? How does that affect Wyzecam traffic?

From my limited understanding, the smart bots in my dual band single SSID router will parcel out the available limited bandwidth from the gateway (ISP provided) to all the hungry devices on the WiFi network, regardless of which band is sucking up that bandwidth. By prioritizing the cams, I give them first and most important use of that bandwidth before any of the higher bandwidth devices.

Please educate me if this isn’t the case.

UPDATE: Did some research on my router. The user directed prioritization feature is part of the QOS (Quality of Service) function on my router. "Quality of Service (QoS) is a feature of routers and switches which prioritizes traffic so that more important traffic can pass first. The result is a performance improvement for critical network traffic.

What has worked for me was to wire in a Ubiquiti lite access point and mount it in the best place in the house that is either line of sight to my mission critical cameras and if not line of sight, it has one wall into the garage to pass though. It runs to my ISP provided router/modem. Once I got all the wifi traffic off that ISP box then all any issues cleared up. I have nightly Wyze rule camera resets for all my cameras.

Edit/ I have a separate 2.4 GHz SSID for all my iot/Wyze gear and have all my desktops computers and TV’s wired into the network so they don’t have to take up Wi-Fi space. My main 2.4/5ghz SSID is for our phones tablets and laptops.

In my previous post, I meant 400 GB/s Download and 20 GB/s upload, NOT GHz.
I know the difference but sometimes type the wrong units.
Sorry

I am using one Mesh Network SSID and have not experienced any issues with 5 GHz and 2.4 GHz connections. Even when setting up new devices. I have never needed to only have the 2.4 active and not the 5.

As stated above, been impressed with this setup.

Once I got all the wifi traffic off that ISP box

I think this is the key. I am fully away from the ISP’s boxes and am not experiencing any issues at all.

You should not have any issue with those speeds. I have read where others have less and are doing fine. They have also removed the Providers ISP provided hardware as well.

How to view all cameras on a monitor? Cameras

I use a Tp-Link Deco M9+ mesh system, two nodes, promoted as 100+ device capable, have maybe twenty-five devices total, probably 10-15 active at any time, average streaming and no other big bandwidth demands, 400/20 broadband, a lot of band competition from a dense multi-family neighborhood. With BlueStacks Android 7 emulator on an amply equipped PC - which should exceed the processing power of any phone or tablet, I imagine… I can do 4-up fluidly on tinyCam Pro with its settings at Main and B…

Agree w\ @spamoni4. Your ISP speed should do well for you.

I am on Fiber, however I am one of those tightwads who refuse to overpay for premium gigaspeed. I only pay for 200Mbps. 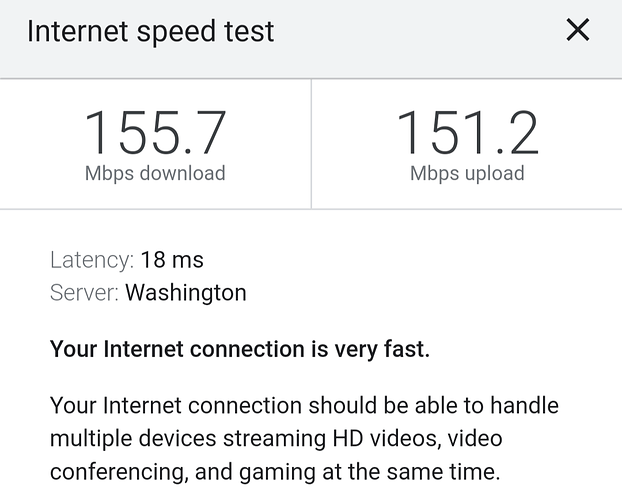