Just updated all devices without issues. For some reason one of my v3’s got updated last night and it has been running like a champ. Been running it side by side with a camera on the previous version. So far no issues, no delay in live stream and no reboots when I ran a live stream for 5+ minutes.

Loaded 4.36.6.17 on two v3 cams last evening at 9pm EDT. One of the v3 cams was my previously reported cam with 4.36.5.58 issues. It’s undergoing a torture test pointed at an area with blowing leaves, swaying branches, wildlife, a mix of moving sun/shadows, hard rain, etc. Ran it out away from the nearest AP on a 25’ cable until signal was -80dBm or worse. I’ve been continuously live streaming these cams from 2 Wyze app instances simultaneously in a group of 8 cams. It’s been 21 hours and both cams have been running flawlessly. The time stuttering, rebooting multiple times per hour and severe live stream issues during daytime hours experienced with 4.36.5.58 appear to have been corrected.

People are reporting v2 cameras rebooting after this update. I am one of them. Can’t connect and it reboots every few minutes.

Sorry for the inconvenience. Could you send me the MAC of your V2? If you have SD card inserted in your V2, could you send me a screenshot of the playback page? I want to check the rebooting frequency of your V2. Thank you.

I got the release yesterday as well. Ran a test side by side all day today and as you experienced, no issues as before. Impressed with the fix.

I have updated my v2’s as well. based on this, I kicked off a live stream to see what would happen, and so far, 3 minutes in, no issues.

When I did my update, I cleared the cache on the phone from within the Wyze App. I also restarted the V2 via the app. Maybe that is the difference.

I had a big problem on a single V2, but figured out how to fix it. Here’s what I went through:

Here’s the really weird part. So even though I could live-stream, change settings, connect to, or review playback for that entire 2 hours, the cam was actually connecting to and authenticating to Wyze’s servers every time it rebooted. We know this because the cams won’t record to the SD unless they first connect to Wyze with internet access, and look at all the recordings in between rebootings: 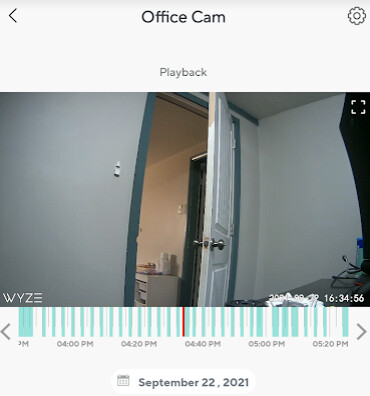 So, it was rebooting and still authenticating and connecting and recording, but I got no cloud events and couldn’t live stream or view or change anything. Very interesting.

Well, it’s fixed now. If someone else has a similar bug with one of their V2’s, I suggest following my last step. It worked to fix the cam back to normal and I have the firmware successfully loaded now. All others updated without issue.

though if you also want my MAC address to see the exact time stamps on your server I can send that to you too. I am guessing my tests wiped the camera logs, but if not, I could try to send what remains in those too if you request them. Here they are zoomed in a little closer to see the time markers better:

Thank you so much for your testing and detailed analysis. Could you send me the MAC of your V2? Also, could you get some SD card log and send them to me as well?

Thank you so much!!

I updated one v2 with 4.9.8.352. It went well on the 1st try. Has been running for 10 minutes without rebooting. It’s doing continuous recording to SD and I’m also live streaming it in HD mode. Will let it run for an hour. If no problems, will try to update a v2 with an installed bridge.

And on a good note… time sync is finally fixed!

One of my V2 is also doing this after the update, now it’s worthless to me.

Have you tried the last step as indicated by @carverofchoice ?

I restarted setup and this time I first held the setup button down for like 20 seconds until it rebooted. then I did setup 1 more time. Setup was successful this time again. Now to test if it will connect. Yes, I could live stream and review the SD card playback again, etc. BUT my Bridge and all the sensors registered to it were deleted (probably from deleting the cam)…so there is that.

Well, I noticed that the problem was on the only V2 that has Cam Plus. I removed Cam Plus from that camera and placed it on another V2 that was working okay after the update, and as of now they are both working correctly

So you think it was Cam Plus?

It was the only change I made, unless they simultaneously corrected something on the backend.

Maybe carverofchoice removed Cam Plus from his cam when he deleted it from his account, thereby inadvertently correcting the underlying cause?

interesting. Are you using and Android Device or iOS. Wonder if it is something with that.

Maybe, when you delete it, it does remove CamPlus, I believe. we will see soon enough, I see he is responding.