Really hope this has resolved the lockup problem!

@carverofchoice @WildBill update to HMS, here is a line item of one of the items it fixes…

Well, it’s unlikely to be worse than the last firmware!

I will upgrade, I am really hesitant to move my V1’s back to the hub though since we didn’t get ANY communication from the team in the last thread at all…but to their credit at least they apparently read it and worked on fixes here, so perhaps I can forgive them to some degree.

I guess it would be helpful for those of us who had problems to test and see if this resolved them, so maybe I’ll move some of the worst V1’s back to the hub anyway for the greater good.

I like the other updates! Thanks Wyze for working on these fixes, it does look like you’ve been busy and productive, that is appreciated.

Added a chime notification sound when on-duty sensors are triggered upon entry (visible to the app, feature flag available)

@WyzeAndy, or anyone else, Can you clarify what this means? I may be dense here, but not sure what this would do.

i THINK this was requested before that the hub will make a small chime when say a door sensor is triggered. basically letting you know that sensor is reading correctly ( from the hub and not just the app) apparently other systems have something similar, a sensor triggers and the hub chimes. so if your sitting in your living room you might hear the hub but not your phone (assuming the hub is in the same room)

If I misunderstood the statement someone please correct me. this is how I took it.

Thanks for the explanation.

I was curious because mine sounds a chime every time a door or window opens, for those sensors included in HMS. Regardless if the system is armed or not.

I thought it was supposed to have it. thank you for clarification too that it is already implemented. I must not have something on mine set right…looks like its play time.

I did not set anything for it to do it, it simply started to do it after the last update. Thought that was normal.

In the past, I was having problems with streaming my video in HMS. I since replaced my routers and everything seemed to be working well, but did not check within HMS. I applied the HMS update without issues and decided to test the adding of one camera.

The Camera added successfully and I was able to watch events from within HMS. The issue is when I click on the “MORE” option to stream live. Here are my Results:

Android does not (At least not on mine). This is what I see - a grey box:

Look at the “tune” settings” under HMS. Only one sound on or off for door/window sensors.

Well, this seems to have been a mistake. Security cameras won’t load. 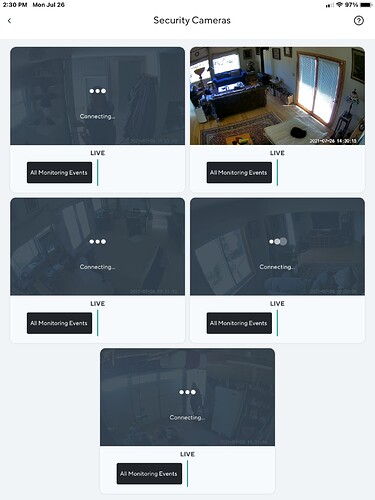 Update: the hub is now interfering with the normal operation of the cameras. Removed all from HMS but I’m having problems connecting to my cameras for the live view. This really sucks.

Saw that. Mine has always been on and I hear a chime each time a door or window is open.

More curious on what this means as well

I had this issue before the last FW update. It actually works on an iPhone - at least one camera. What Device is that? Android Tablet or iPad? I submitted a log for them to look at as well.

iPad and iPhone do the same thing. Some cameras are still flaky and won’t connect.

I will load more than one on my iPhone and see what happens. Will post a picture soon.

EDIT
iPhone still streamed for 5 connected cameras to HMS. My issue is still with Android… Nothing will stream, just get the grey boxes as shown above in previous thread.

I think if Wyze is going to continually break HMS with firmware updates in the beta program they should consider giving all of us guinea pigs a free year of service. Seems like a good portion of the time HMS is unusable due to some flaw in the beta firmware. Last version I was unable to activate HMS due to the incompatibility with the V1 sensors and now the cameras are screwing everything up.

Just added back all my security cameras and everything seems to be working. Very unsettling that there is intermittent functionality with this to the extent that I wouldn’t trust the system at all.

Update 2: retriggered the sensors and now they reflect correct status.

My Android is consistent with not being able to play Live. I can view the recordings/events. But my iOS has no issue.

I know what you mean and are saying. I currently leave mine in Test Mode.