@spamoni4 This might help your problems here. You should test and update us on whether this new update helps with all your recent VDB issues.

Will check on it. However, I don’t see it on my Android yet.

Just got it loaded, had to remove the previous version for it to install.

Will start my testing

Nice WCO battery usage info. Siren isn’t tool loud but that is likely limited by hardware. It should be noticeable by someone in detection range. 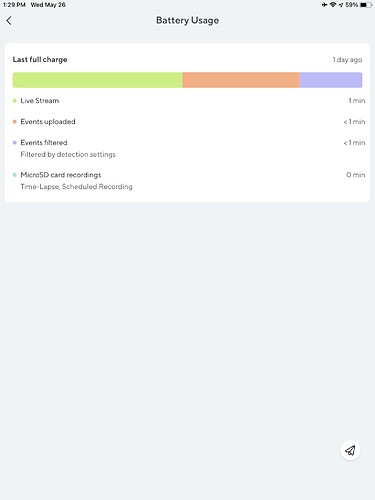 Not available for Android yet. Did show up on Test Flight for the @#$%^& iPhone, but did not notify me that it was there (as it usually does).

This update caused the HMS walkthrough to re-run.

Not a bad thing, but one of the screens tells you youre currently in disarmed status regardless of what actual status is. (Im not at site of alarm and its currently armed - walkthrough text is purely cosmetic and assuming a fresh setup)

Could lead to some confusion.

I uninstalled thew app and then downloaded from app store and it came down. Not sure why I had to do that. However, I am not receiving any notifications unless the app is running.

@WyzeYichen I submitted a log 215435. I installed the latest release on my Android phone. Had toi uninstall the app and then download from store and it provided the latest beta. However, I am not getting notifications unless the app is actually open.

I too am not receiving notifications after the app update. spamoni4 asked me if I was getting notifications, so I walked out my front door and walked back in, and my cam plus person detection rules all worked fine (announced me on Alexa, changed my color bulb, made a ding, etc), but I did not receive a notification from the app as I usually do for either my V3 or my Video Doorbell.

EDIT: Tested my back door, and Eufy worked without the Wyze app being open back there. Then I walked to the front door again and Eufy worked this time. So weird that it went the way it did the 4 times before that though (working when Wyze was open, but not when Wyze was closed), must just be a weird coincidence or an Android 11 bug of some kind. Wyze still did not work (sending notifications while the app is closed)

I also have Eufy 2K camera’s.

Hopefully they will correct.

That is what I was experiencing as well.

Now I am in a nightmare of resetting my phone.

I did verify that the iOS app is working fine for notifications. So this is only affecting Android.

Release notes mention ability to sort apps on Watch 44. I don’t seem to have that capability or am not understanding where the option is accessed. Other new functions like WcO siren are working. Would be nice to be able to turn it in for x seconds then turn off. Primarily looking to use it to scare raccoons from the pond.

you would go into the Wyze App, select the Watch and in there you should see an option for Watch App Display. Tap on that and then you can reorganize by long pressing the 3 bars on the right side of the app and moving them to where you would like it.

@WyzeYichen , I wanted to provide you with my take on the latest App update for your review:

I like the direction Wyze is going with the updates, but believe this latest one has some flaws in it as it relates to Android and not iOS.

Ok - sorry about that. this is good to know. Is it possible that there is a Beta Firmware update for the 44 which is required to enable this feature?