Wyze Cam v3 and Wyze Headphones are now integrated with the Wyze app!

App version 2.15.21 for Android and 2.15.22 for iOS also add fast forward for Cam Plus Events, a WiFi/Bluetooth connection status for Wyze Lock, and more.

On android:
You are unable to zoom in on event videos when the video is paused in this update.

When you zoom in while its playing and then pause, it resets the zoom.

Additionally, tapping an event notification goes to camera live feed, not the event.

Did you forget to send the iOS version to Apple? Still not available after 8 hours.

Additionally, tapping an event notification goes to camera live feed, not the event.

Same behavior on the iOS side. Please restore previous behavior where tapping the notification took you straight to playback of the Event.

Same behavior on the iOS side.

You are talking about 2.15.22? Still not available in the Appstore on my side. 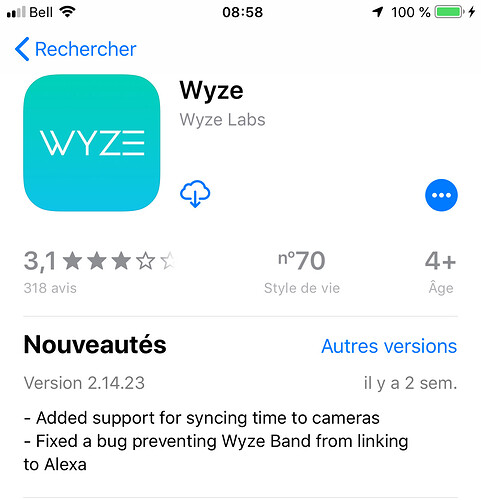 Actually I like going to live feed better when tapping on the notifications since there’s such a delay going to events. There is always a 10 second delay and by that time that mean person up the street could be behind you with the mallet over your head. Live feed you can see where he is. Events are actually a joke lately anyway

At Wyze, at least let me upload to this latest version if this is a glitch so I can go to the live feeds like I’ve always wanted before pulling for the others who prefer the events.

Apple is always slow in releasing these updates.

First time this has happened with Wyze-Apple. Always available within an hour. If I had a stake, I’d say someone forgot to bring it to Apple. Last week, there was an update of the firmware for the pans and v2s. The one for the pans appeared 5 minutes after the announcement, V2s appeared 24 hours later. Firmwares have nothing to do with Apple. He must have one sleeping somewhere lol.

In my neck of the woods I always get updates 2 or 3 days after release though. Not just Wyze but all apps. So not sure.

BTW: Android version sends no notifications period although they are enabled. Also although it’s beta stil, the beta is removed from the app name when looking at it on the phone.

In my neck of the woods I always get updates 2 or 3 days after release though.

When wyze makes the announcement, instead of waiting for the app to update automatically, go straight to the Appstore. If it’s not there, refresh the page (pull down).

I have done that on most apps and it does not work. Hence why I made my comment above;

There really needs to be some stronger moderation in the Facebook groups. Wyze employees barely come onto here in the forums (per a forum maven) and the total disrespect and rudeness when I ask a question the group. I don’t get it. Is there a safe place that I can ask and get a Wyze employee to answer me?

This is more a community forum, where users help each other, and Wyze makes announcements.

I’m on your side for this one

I don’t completely understand that one. You are talking about the forum or Facebook?

It might be nice to start a new thread on the topic and link to it here because we’re starting to deviate quite a bit from the main topic which is the latest app update.

Yea I post in the group on Facebook because the employees seem to spend more time there than on here. But sadly when I ask the questions in the group I get rude comments. And that bothers me when I’m trying to fix and/or resolve an issue.

But yea, I’ve been refreshing the appstore and have not seen this update. The Android/beta has updated already but not getting notifications on there.

Still not available in the Appstore🤔 @WyzeAndy

I can’t wait to see if the issues I have reported in the beta section when reading certain events will be corrected. When that happens, I have to go to playback or record them from the cloud or go back to the latest official version to be able to watch them. I avoid the official version because there is always the bug of events that do not match the time of the event when I click playback.

I’m on tech support about another issue and they haven’t released it to the appstore yet.

I’m on tech support about another issue and they haven’t released it to the appstore yet.

It confirms to me what I thought.Thank you!