Wyze app 2.34 is releasing today with goodies like a delay between people being detected on armed cameras and alarms being triggered, product search in Shop, Wyze Home Monitoring being added to Wyze Widgets, bug fixes, and more! 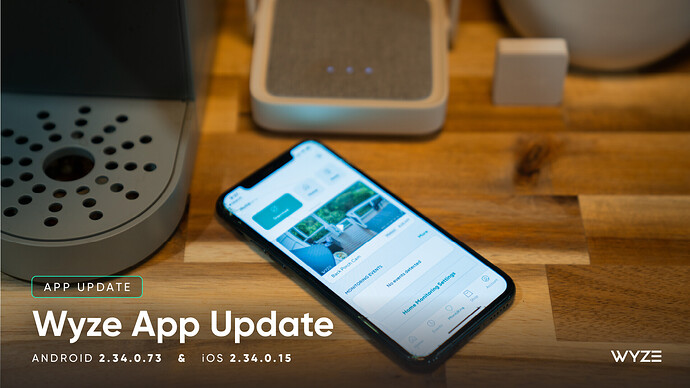 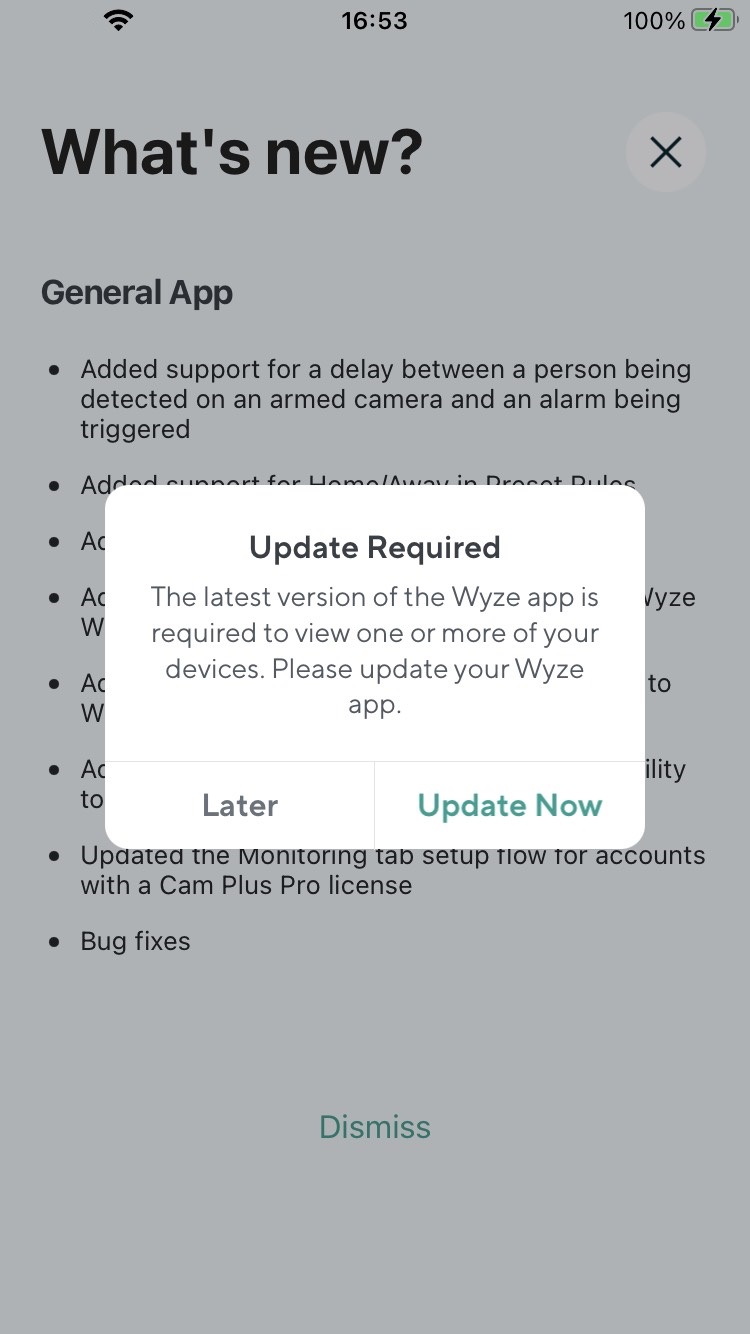 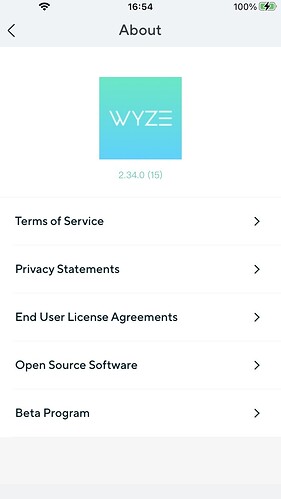 Restarted app, same popup, this time tapped “Update Now”. Of course, there was no update.

No log as there would be nothing to look at with a cleared cache and restarted app.

Recording from Playback has been solved BUT another issue has been created: « Device is connecting. Please try again later » when you want to return to live viewing or return to another cam. 2.34.0(15)

Edit: The playback recording issue has been solved for V3s but not for V2s and Pans V1s. The new issue created above is for V3. I don’t have it on my V2s. The video is saved but not playing correctly and there is a gray thumbnail in the iOS album like the previous 2.34.xx version.

Installed on Android and iOS with no issue.

I am now having issues logging into the app…I created this forum post about it.

Update: Interestingly I am receiving motion alerts and when I tap them I can see them and watch the video…but when I tap the downward arrow to go back to the main screen showing all devices, it shows me the login screen again.

I recently updated the iOS app to 2.34.0.15. After the update I was logged out, no biggie, so I attempted to log in using my Password Manager app to sign in, and now it says invalid credentials. I attempted to login to the Wyze website account using that same app and those same credentials, and it logged right in. So, I know my credentials are correct. This is copy and paste from a password app, no user error. Has anyone else had this issue? As of right now I am not able to log in and obvi…

Wyze support says I am not the only one… 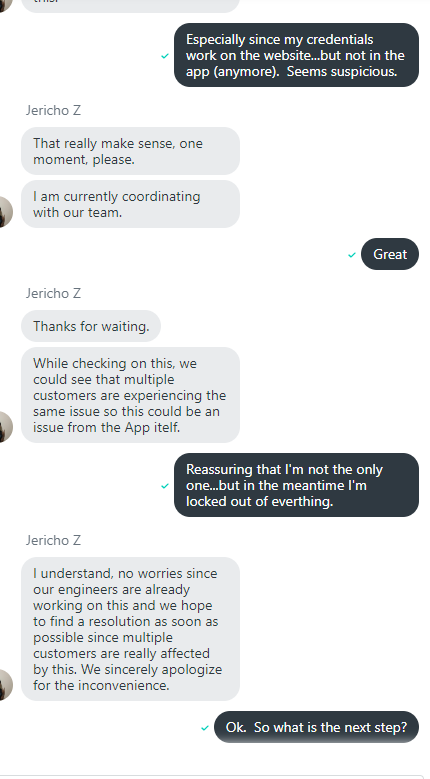 Installed Android without incident. Was excited to check out the Home Monitoring Widget… Now not so much. The real estate this thing requires is more than a 1973 Cadillac Fleetwood! It takes up ⅓ of the screen. The sizing box is twice that of the button! This is the smallest it gets compared to the app icon beside it… A 1x1 Icon just wouldn’t do?

I like that pressing it shortcuts into the app Monitoring Tab, but I really need it to be a 1 x 1 icon if it wants to earn space on my home page (20 1x1 folder icons & 10 1x1 app icons)

1X1 might be too small for any text description…though they could have the 1X1 just show different colors, but it seems like it should reasonably fit within a 2X2 at the least.

I wish we could use the widget to easily/quickly change the HMS status from the home page.

Edit: Just tried again with Android 13 and it does let me shrink it a little more.

I agree that the text wouldn’t be able to be in a 1x1.

A 1x1 with the colors would be nice, but I would settle for just a shortcut icon that takes me to the Monitoring Tab

It is 2x2. Not sure why it appears so elongated on SlabSlayer’s phone.

It does that on mine too, it forces it to be a minimum of 2X3. It was doing that in the Beta as well. At least on Android. I couldn’t shrink it any smaller either.

EDIT: Never mind, it does shrink down smaller on Android 13, my bad, but it didn’t shrink smaller for me on Android 12 and now it does.

My widget on Android 11 shows it as a 3x3. Resizing smaller is not an option. Might very well be an OS version specific restriction.

Wow that’s odd. I checked from an Android 11 phone too and only see a 2 x 2 widget. Going to check some other flavors of Android… 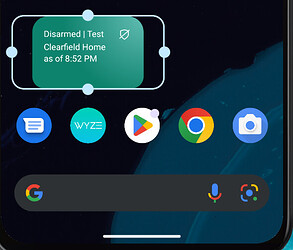 This is the smallest size I can do on Android 12:

So it depends on your OS apparently.

It appears to be dependent on the device’s UI, screen real estate, graphics scaling, screen orientation and Home screen icons size and grid settings. All of my Samsung phones and tablets (Android 8, 9, 10, 11, 12) only have a 2 x 2 widget. I have some Moto phones that only have a 3 x 3. Regardless, ability to resize and the shape of minimum widget depends on all the aforementioned gobbledygook.

I would have to change my global gobbledygook settings for my OS UI which would change ALL my icons and layout!

I would be absolutely LOST and need psychological treatment to handle it.

Will just wait for more widgets.

I accidentally selected the monitoring tab and this is what I get without a subscription: 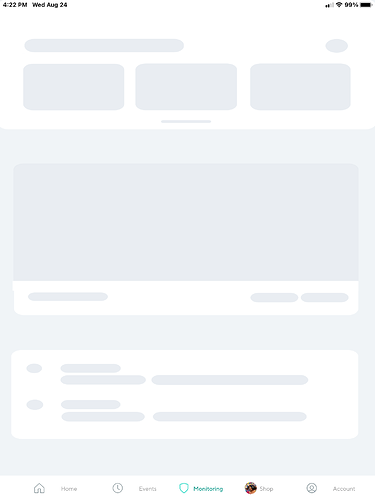 Is that what it returned in the last app version?

I have had the monitoring since I started w\ Wyze, so I have never seen what that tab looks like to non-subscribers or what messages they got.

This is with the most recent app update in iOS. Never happened before. It had an ad for the monitoring service.

Update: seems to have been temporary. 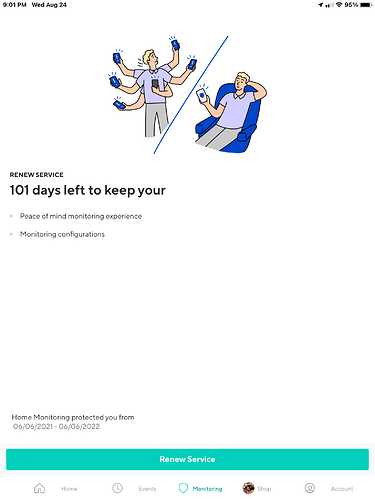