Who dunnit? The bird murder-mystery

I found a dead bird on my porch: 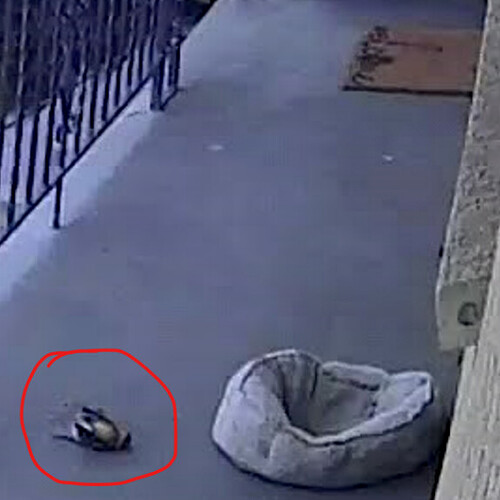 I have several cats and they were the obvious suspects. 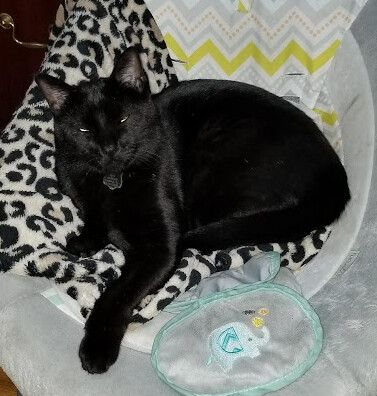 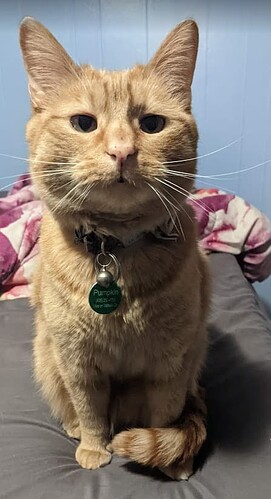 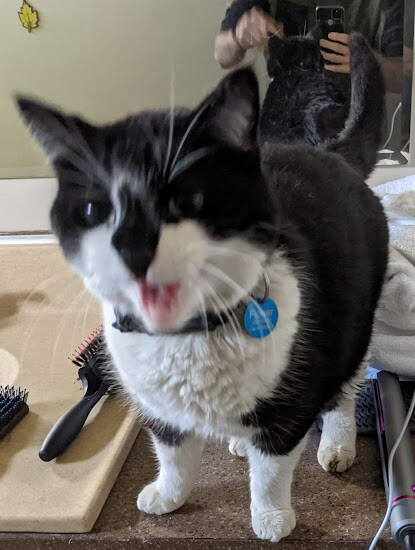 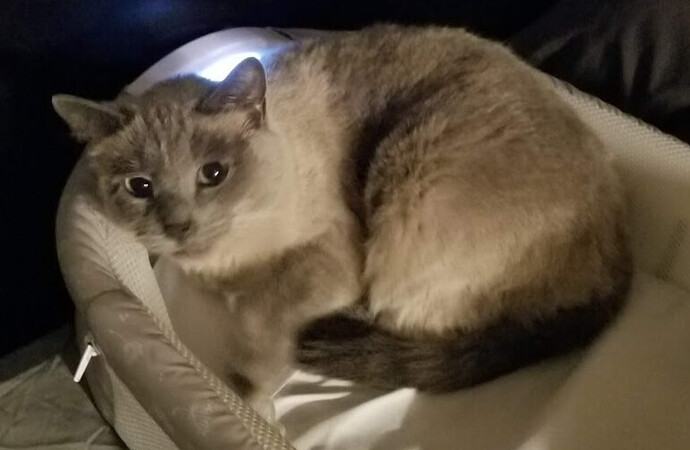 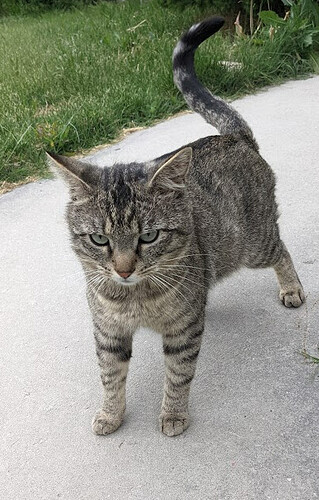 It should be mentioned that suspect River eventually grabbed and ATE the victim roughly 10 hours after the victim’s death: 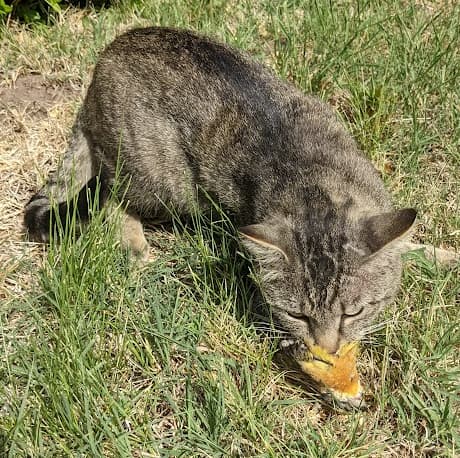 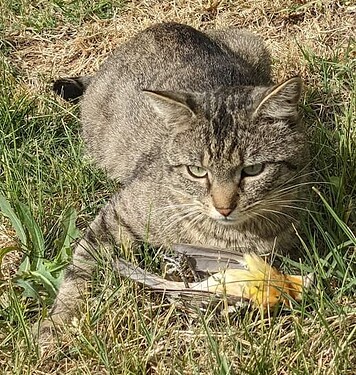 Which does not make him guilty of the murder itself, but it doesn’t help his case either.

I then checked my Wyze cam to find video evidence of the murderer.

Before you watch the Wyze cam video evidence of who murdered the victim, make your guess…who do you suspect is the guilty criminal/murderer of this innocent victim?

Same event, but another Angle (but on Eufy backup cam)

River. Tail curve and overall stance in first of his pix. Otherwise Pumpkin.

Without ‘benefit’ of reading bios. I suspect they might misdirect.

That’s slanderous! Why would you assume that of me?

Besides, the ENTIRE post is a misdirect! Not just the bios…
You thought one of the cats was guilty, so I still got you! HA HA HA!

Better got than misbegot, I guess. No aspersions intended. Nice kitties.

Hey, if River did do it, and left it, would the others know and respect his kill, leaving him to return and nosh at his leisure?

If you were being interviewed as a prospective juror on a murder trial, and defense counsel asked ‘Would you convict?’ what would you respond?

if River did do it, and left it, would the others know and respect his kill, leaving him to return and nosh at his leisure?

Naw, if you abandon something, it’s assumed it’s free game, and the other is done with it.

If you were being interviewed as a prospective juror on a murder trial, and defense counsel asked ‘Would you convict?’ what would you respond?

Could definitely use it as an excuse to get one or both sides to want to get rid of me…but honestly I would love to sit through trials.

Most likely I would respond:
“I can’t answer that question yes or no without first having been presented with the evidence on both sides.”

Yeah, either ‘If the evidence supports it’ or ‘I don’t know’ I think.

I got got by a lawyer by answering earnestly, reflexively, ‘Yes.’

Served justice though, probably. The guy looked guilty as hell.

Poor bird… you have a ton of super cute kitties!

Good googly moogly… How to determine actual culprit from all of these suspects? Haven’t read all of the bios yet to see which ones (if any) have priors!

This toothless wonder was allergic to his own teeth. The vet eventually had to remove them all. Someone actually stole Flower away from us for like 5 years, moved to a different county, then returned him to animal control when his final teeth got infected and he stopped eating and they didn’t want to foot the bill to the vet. Animal Control called us and asked if we wanted our cat back,

What in the actual flock with this?!

Just read the bios, who steals a cat?!?!

Yep yep, the bio is all true. Animal Control told us that the person who stole Flower had been calling him Snuggles for the past several years…but then his mouth got all infected and he was refusing to eat, and he quit cleaning himself, so he got all mangey, and he was dying because he wouldn’t eat, but they wouldn’t pay to get his teeth pulled so they just turned him in. Then they called us. I actually recorded me picking my daughter up from school (yes I went to pick her up with one of her other kitties [Kovu]) and telling her that her long lost cat (missing 4.5yrs and presumed dead all this time) is actually still alive. Just try watching this video without tearing up:

Do you think they were happy to be reunited? Can you tell who my daughter’s favorite kitty is? Do you see why the kitty-nappers named him Snuggles? 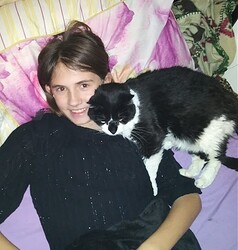 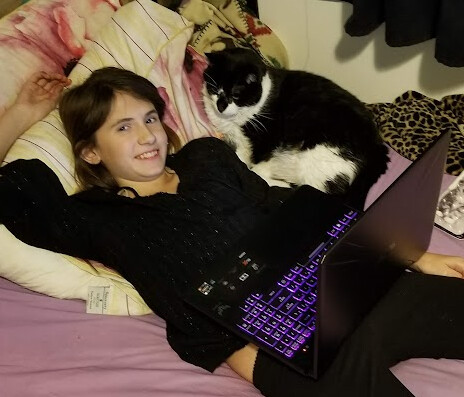 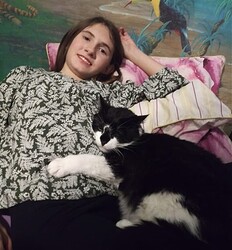 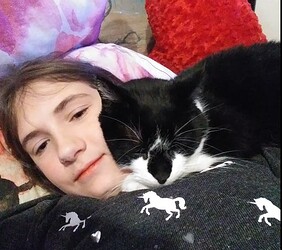 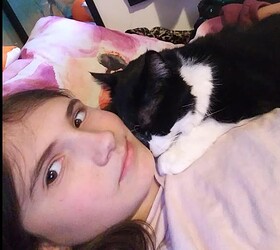 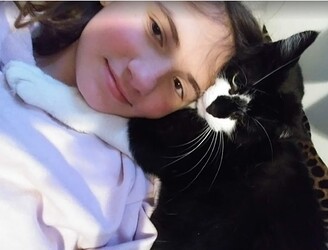 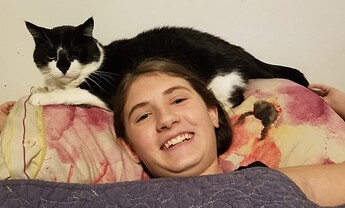 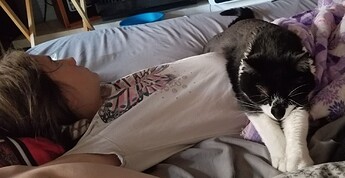 Cant believe some low-life scum bag not only stole your kitty-baby, but didnt help the poor thing when it got terribly sick… personally id take whatever steps i could to make sure those nasty people never, ever do something like this to someone else…
The put-put looks so happy to be back home, and getting to snuggle their best friend again!

love all those putties.

You are one interesting cat, Carvermeister.

Long may you purr…

@carverofchoice 's best thread, paws down. I read all the bios, placed a bet, and then got fooled by the oldest trick in the Poirot / Dick Wolf mystery handbook.

And then the daughter reconciliation video - damn carver, you are on a tear. (Pun/homograph not even intended.)

We have a cat (Jerry) who always gets lizards moles rats the usual, but she never eats the lizards, just plays with them. Once she’s done and it’s (mostly) dead she will leave it around, and the chickens love it

Thanks, I thought it would be much more fun to do it this way instead of just post the bird suicide video in isolation (boring).

Glad you enjoyed it this way too.

For what it’s worth, I placed my bet on Kovu before I reviewed the camera.

It was captured as an event too. Both as a sound event triggered by the window crash, and a 22-second Cam Plus motion event.

I still think the cats psychically willed the bird to fly into the window!

My misdirection worked so well, that when I finally showed my teenage daughter the videos (she’s 15 now and much older than the pictures above), she was convinced one of the cats THREW the bird into the window!

I played it for her multiple times on my big monitor, and it wasn’t until like the 5th time watching it that she finally realized the cats were innocent. I had convinced her so thoroughly that one of the cats had to be guilty that she was convinced the bird was thrown into the window by one of the cats.

We used to have finches kamikaze into our patio door after I took the grids out.

Our neighbor cat has left entrails on our front porch, like an offering.