This duo has been making frequent trips to my window feeder. Sometimes together, sometimes alone.

So cool. Been living in Colorado for almost 40 years and there aren’t any Cardinals out here. When growing up in the midwest (central IL), I used to see them all the time.

My grandparents loved to bird watch. We would sit on their patio for hours watching their feeders. I don’t get nearly the number of bird they used to get, but I’ve just got the one feeder right now. I’m waiting for my humming bird feeder to arrive. In the next few weeks I’m going to get a birdbath as well. Might have to add another camera or two in the windows to watch them.

One of my cats, Cooper, was very interested in watching the live feed on the TV.

With Cooper’s attempted attacks on the birdy, I’m not sure his birdy “friend” would agree that Cooper is a “sweety,” “silly,” or a “friend”

FWIW, I have 4 cats myself, and boy do they like to catch and bring home birds, rodents, squirrels, and grasshoppers…though I doubt any of those consider the kidnapping cat to be their friend, or nice at all

I don’t have a cat, grew up with dogs. My grandson loves cats, but he doesn’t have one yet either.

But if other cats were like Cooper, he would have a field day. Amazing how patient he is in waiting for the Bird to come back.

Do you have collision insurance on that TV?

@carverofchoice Cooper has been outside a handful of times. He runs away from wood bees, birds, and squirrels.

He is on some pain meds (he had dental work done a couple days ago) so I’m sure he’s stoned.

@StopICU33 I do not. It was a cheap Amazon prime day buy and its got 2 rows of dead pixels anyway. But since it’s barely noticeable I’m just keeping it until it craps out entirely. It’s a fire edition Toshiba, so built in alexa makes it super easy to see my cams.

He is on some pain meds (he had dental work done a couple days ago) so I’m sure he’s stoned.

Aww, poor kitty, I know exactly what they are like with dental issues and that medicine and such.
One of cats, “Flower” has been “allergic” to his own teeth his whole life. His gums would get infected, and the vet would have to pull them one by one over time until he is now finally completely toothless. The vet told us this is actually very common with house cats.

Though, the tooth allergy issue actually turned out to be something positive. You see, one day our kitty didn’t come home, and we just all thought he got hit by car or something, and our daughter was really, really sad. She loves her kitties. Suddenly, 4.5 years later we get a call from Animal Control in a DIFFERENT COUNTY call us up and say that someone turned in their cat “Snuggles”, but when they scanned the chip it said we were owners and his name was “Flower” and they asked if we wanted him back. Apparently, his mouth was really infected (the tooth thing), and so Flower stopped grooming himself or eating or moving, and the “owners” didn’t want to take care of it (foot the bill), so they just turned him in to Animal control (it’s actually a much more complicated story than that, but that’s what it boils down to in the end). So I go pick up my daughter from school that day (with out black cat “Kovu” in the car with us) and record me telling her that we’re going to drive down to Animal Control to pick up her long lost kitty who we thought was dead, but isn’t after all…

Here’s the video of me telling my daughter (12yo at the time) that her 4.5 years lost beloved kitty Flower is actually still alive…Warning, it can be a tear-jerker:

It’s not a Wyze video or anything, but it is totally related to what you said about your cat needing dental work.

And yes, we did get him back. and he was in such excruciating pain that he wouldn’t eat or move or anything until we got him to vet and got his dental work all caught up removing his last 2 teeth. Now he’s happy to be back cuddling with our daughters and with the rest of his buddies: 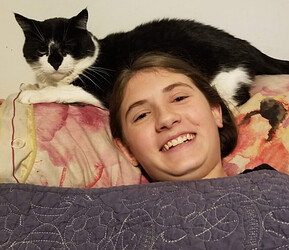 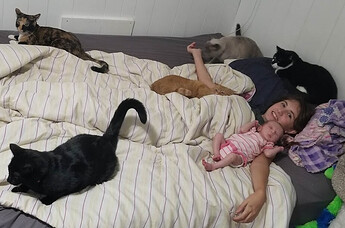 Anyway, without his tooth allergies we would’ve never got him back. I’m glad you are keeping up with his dental needs, because it really can be so painful.

He’s steadily lost his teeth over the last couple of years. About every 9 months I’d find a canine tooth just randomly laying on the floor. Sometimes it was his, a couple of times it was Diablo’s. Took them to the vet, but didn’t find any bad issues until this last time. Bad infection. He had an abscess right under his chin (where it was draining to) and it burst open or he scratched it open. So. Much. Blood. Vet checked him out, gave him antibiotics, and we scheduled a dental. That was back in February. We had a bad snow storm the day he was supposed to have his dental and the vet closed that day so we had to reschedule again. Due to covid they are so backed up, it JUST got done. His last canine is gone, and they took 2 molars. He refuses to eat the soft food as directed. Won’t eat his normal.l food moistened. So, we figured a fed cat is better than a starved one and he’s just crunching away on his hard food.

Between him, Aston (diabetic 16 year old cat), and Hunter pup with epilepsy… The medical bills have been pretty high recently. But, for 15 years or more we’ve had it super easy. This last year has just been crazy with Bentley passing away unexpectedly (pancreatic cancer), and Aston’s diabetes diagnosis, and now Cooper’s dental stuff. Diablo is the one who so far has been medical issue free this year.

Hunter pup is getting his teeth removed (very likely all of them) in the next couple of months. We are just waiting to make sure his medication adjustment and the new food (Purina Neurocare - proven to reduce seizures) has been in his system for at least 30 days. 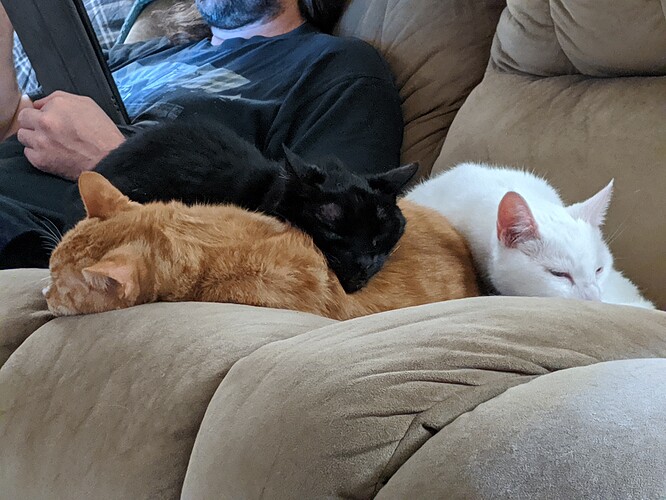 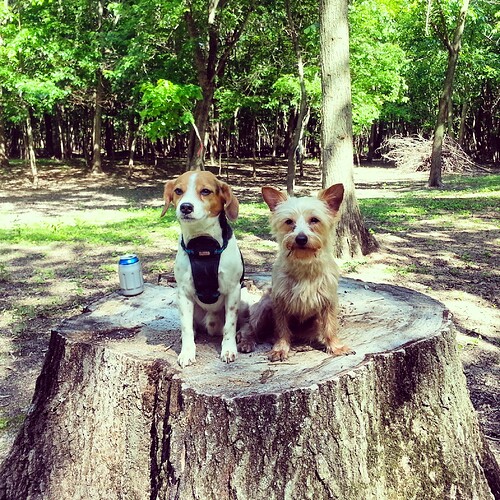 Hunter as of 5 minutes ago: 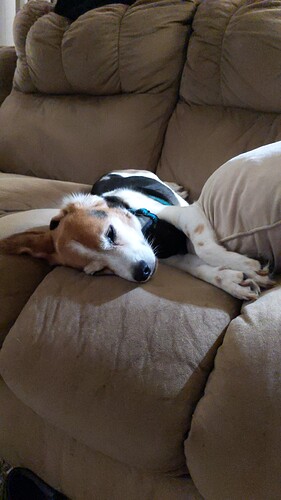 Our biggest frustration with Flower having no teeth is that now he doesn’t see any point in chewing or eating slow, so he just gulps down food fast and then vomits way too often because he sees no point in eating slowly anymore. That drives me insane sometimes. If you figure out some way to help with that as you go through things, PLEASE do share.

The funny thing is that I’m actually very allergic to cats. I got allergy tests done a year ago. For Cat Dander I scored 99.70 = VERY HIGH Allergies:

But my wife and daughter love our kitties too much, and truthfully I do too, so I just deal with it for their sakes and take different allergy meds frequently to cope. It is what it is. Kind of funny though.

Anyway, I liked the idea of streaming the “window cam” on the TV. It almost makes it feel like there is a window there. I might actually do that in my office more, just to feel like I’m looking out a window…and a private 1-way window at that.

There is a pet food now that helps with dander and allergies! Just an FYI. Might offer you some relief?

With more than a decade of research, Pro Plan LiveClear is a first-of-its-kind cat food that safely and effectively reduces cat allergens. Learn more about how it works.

He’s gotten better now that his food is separate (special diabetic diet and all). We got 2 microchip pet feeders that will only open when the registered chip(s) are detected and will auto close when they move away. Aston has 1, and Cooper and Diablo share the other. Seems when they see no competition for food the veracity with which they eat lessens substantially.

But I’m not a stranger to pet messes. We have a shampooer just for that reason.

I might look into a few of those things you mentioned (food, microchip feeders, etc). Thanks.

Back to your cardinals though, it was so cute the way the one fed the other, I love it.

Y’all. The biggest coincidence happened. Today, the picture on our TV finally gave out. I knew it was just a matter of time since we’ve had dead pixels for awhile… But today it just slowly blacked out from the edge inward. Really weird to see.

@carverofchoice I bought the SurePet Sure Feed microchip feeder. I did not opt to buy the one that’s wifi/app ready. You can use your pets existing microchip (if it’s a supported type) but if not, they include a microchip tag you can add to their collar (and you can buy extras on Amazon).

And yeah, that cardinal couple is my favorite thing right now. I’m gonna give them names. Any suggestions? Lol

That is funny. There is so much extra food and plenty of room. I love how they keep coming back and switching locations.

Of course lots of humans sadly act like this too…scarcity mentality even when there is a huge overabundance.

What did Cooper think?

He keeps missing the birds on the TV, and since we put our old TV there (the other one finally died) there isn’t room for him to get up there. He watched them from the window earlier, though and knocked the camera out of place. 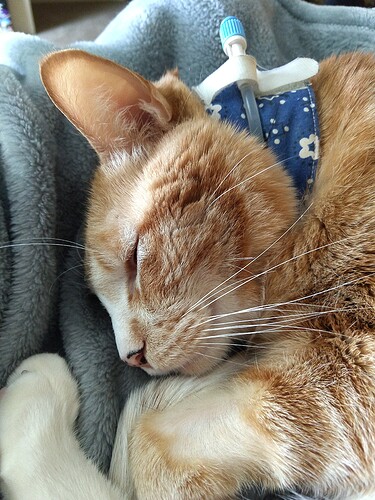 I can’t tell you how valuable Wyze cameras were during a year where poor Gizmo had to have a feeding tube installed in his neck. Multiple vets weren’t sure why he was often unable to keep his food down. Probably cancer but in an area where an operation would have been risky at best. For about 12 months we would get him to lay down on the living room floor and get all comfy and we would very slowly inject specially prepared food with medications and supplements, 3 or 4 times daily. Since he shared a couple litter boxes with his sister, and we had to monitor his daily output, Wyze cameras were indispensable. Also monitoring the water and kibble dishes. His condition was up and down and inevitably not thriving so we had one of his vets come to our home to euthanize him. Breaks my heart to lose a pet, as I’m sure it does most others who lose pets.

Awww he looks like my Aston. I’m so sorry you had to say goodbye. It’s always rough. I’ve lost a few furry loved ones in my life and it never goes away completely.

The following day it occurred to me that his final minutes were recorded on cameras in the living room I debated with myself for a while and reformatted the SD cards before I drove myself crazy. We have plenty of photos and a few videos of him during his better days, when he’d watch youtube squirrel videos on the TV.

I can relate. I debated saving the video of the last 2 weeks of my dog Bentley’s time with us. Ultimately, I deleted it because I want to remember him when he was well. Not those last 2 excruciating weeks.