New accessory for V3 (window mount) launched without any announcement.

At time of first writing, I could only find it by running a search for window, or going directly to the link (hence tips & tricks since you can’t just browse to it or find it in shopping when I checked): 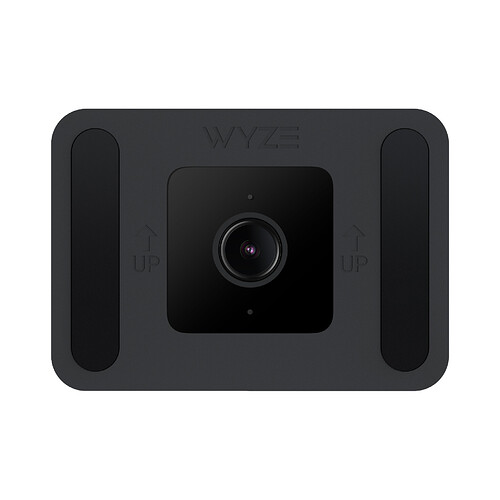 Upgrade your exterior security by attaching a Wyze Cam v3 to your window. Mount your cam on a glass surface with this accessory and enjoy a clear view free of glare or reflection. 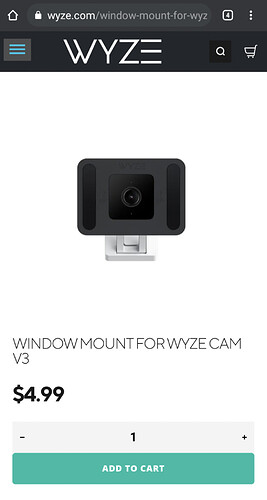 Good option for some people. Should keep out the glare better than some mounts by keeping things flush to the window. Sadly I need one at an angle, not straight on like this, but others will like it.

EDIT: This Accessory is now fully listed with the others on Wyze Shopping, so this was only found a few days before public launch. 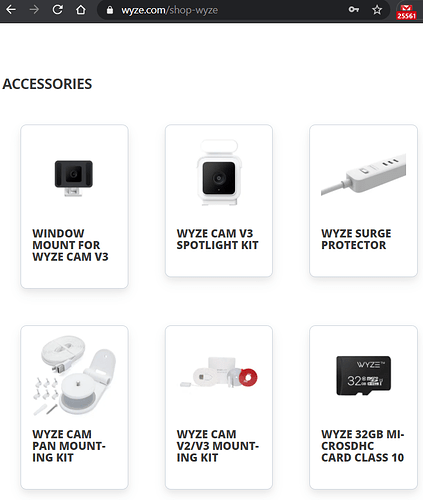 How well do those stay on the window? Bit skeptical as I went through a fortune with those window mounts for iphone and they only stayed put for a day before losing grip and falling.

Thanks @Customer it does make me wonder what other things could be hiding in their own unlinked pages… Like an Easter egg hunt.

@FriendofFeralCats it’s too new to know how effective they are. If you’ve had problems with others, maybe wait a few weeks until some users post reviews first. We should have a better idea of the details a couple of weeks after they’re delivered.

If you’ve had problems with others, maybe wait a few weeks until some users post reviews first.

that is a great idea to wait if you have any hesitations. as you mentioned, this type of mount will only be useful for flush forward facing views. if you need ANY angle, this is not the mount for you. and as there are quite a few options on windows these days, I think that having dual payne windows may inhibit this mounts abilities to stop light reflection from inside of the home as they would merely reflect off the further panel of glass. just a couple of things to keep in mind.

and these also appear to be a set it and forget it type of mount. once you stick them, that’s were they shall stay. and I don’t see anywhere that they intend to sell more adhesives that would make it more mobile.

Aren’t these wacky wallwalker style gummy pads that can be reused?

It kind of looks like it, but it’s hard to be sure with no description or anything but the title, price and 1 image view. I don’t know if they intended to launch it yet or were just starting to build the page.

The mount may be (is likely) a high-bond adhesive-backed foam gasket, probably permanently bonded. Bam’s point about double glazed windows is a good one and “reflects” their fine insight.

If you want to try a DIY before buying, it’s not difficult to construct an analogous 4-strip frame using 3M Command (replacement) adhesive strips (at Target etc.). Pull and stretch the tabs to cleanly release the bond and remove. If exposed to the sun’s UV, I wouldn’t necessarily trust the clean release after some time.

Note these Command strips are white colored and not the optically desired black of the Wyze product. One can get black VHB foam tape, but it’d cost more than Wyze’s, and you’d need a locomotive to remove your project from the glass. (Or a razor scraper and some patience.) … Eh- black Command strips are available too.

I will say that I have had a Wyze cam (first a V2 and now a V3) pointing through a double-paned window at an angle (not flush) and there is certainly some glare at night as mentioned by other posts, but it’s still clear enough to see. It is pretty good in the daytime too.

You definitely need to leave the IR off (I just use the porch light) or you will get a lot of glare/reflection.

If it’s okay through a double-paned window even when at an angle (not flush against it), then I’d assume it’s even better when flush like this, while blocking out the immediate glaring areas. I bet it works great if you can do flush, and if you leave the IR off.

You can see some examples of what mine looks like through double-paned windows even when at an angle by viewing the videos at the following posts:

Our black cat, Kovu, loves our Amazon delivery guy saying hi to him. Kovu runs home hoping to catch his buddy on his way out, but today the package wasn’t for us. You see the delivery guy quickly consider whether to just hurry and get through his assignments for the day so he can get home earlier or to take a moment to be kind to a hopeful animal friend, and then choose to make our hopeful kitty so happy. Kovu was recently hurt (bleeding on his head, and bruised paw). I think it’s safe to say t…

For months I’ve had a V2 side-by-side with an Eufy Indoor 2K, both watching my front porch through a window (for failsafe redundancy). Now I got a V3 and decided to put it where the V2 was to compare the V3 picture quality to the Eufy (and the V2 too I guess). I will eventually move the V3 outside so there is no window glare. [image] So, the V3 has a Starlight lens, but is only 1080p compared to Eufy’s 2K, so I thought, in theory, it might bring in more light, but be half the resolution and s…

Here is the most recent video embedded here for convenience:
(Top one is a Wyze V3 angled through a double-paned window in the daytime)

The V3 (and Eufy cam & V2) in those videos is through double-paned glass at an angle, and as you can see, it’s still viewable, so I imagine flush will be even better, especially at night…but as mentioned by BAM, it will still probably have some reflection because of the second pane, but you can still see things fairly well regardless, maybe not clearly across the street, but in my yard where I care about it, it’s okay.

Just ordered one today, we’ll see. Shipping cost as much as the mount, and when I tried to order it wouldn’t take my cc and had to use pay pal.

Awesome, check back in when it arrives and let us know what you think, all the details, etc. Maybe take some pictures.

I look forward to your follow-up.

Still have a reflection with double paned windows. Which most are these days.

Hello, People.
The best view from window-mounted V cameras is from its outside face. For those willing to go down that path, I would point you towards Mounting V2 on window post #54. This approach will provide a stay-in-place mount that will not peel away. However, if you don’t like using the magnets, the window contact part of the bracket (I call it the wall plate) can be made longer to accommodate more Command Tape. For further insurance, caulk the top and side edges of the window plate. Since the wall plate is opaque, there will be no UV damage to the Command Tape. A 3D-printed helmet could protect a V3 from direct rain damage. Check out My Wyze Cam V3 died in the rain post #39. The dog-leg bracket is the simplest and compact bracket there is. Once an aiming point is decided upon, the bracket will stay aimed. The aluminum bracket first linked above is aimed downward from the zenith 110° and from the right wall 70°.
Soon I will be posting a simple cardboard device to measure the horizontal and ver tical components of any line of aim. The two aim components along with the thickness of material to be used in a dog-leg bracket will be input into a spreadsheet that will be linked for your use. The spreadsheet to date calculates layout values for Simple Folded Dog-leg, Simple Folded Dog-Leg with Folded Stop, and a Folded Side Panel Support Dog-Leg bracket. Also, the spreadsheet outputs a 3D printable document that can be saved as an ASCII text with the .stl extension, see screen snip below. I am cleaning it up for prime time.
This screen snip of a print preview of a dog-leg ready to be printed and bent to its vertical angle or used as a marking-out template applied to sheet metal to be cut out and bent. 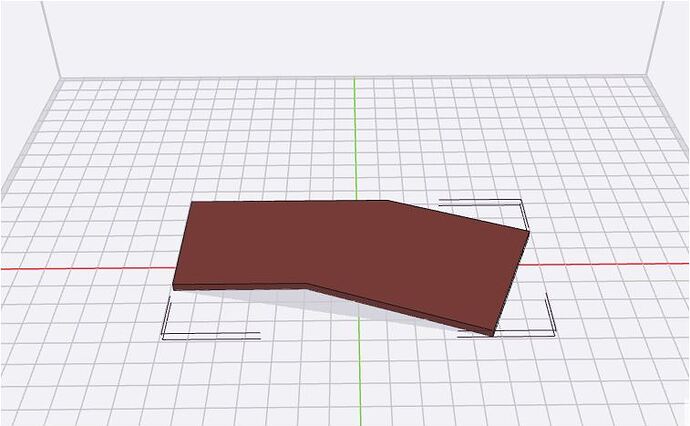 “what other things could be hiding in their own unlinked pages?” You could always try a Google Search on the Wyze site. Like: “site:wyze.com window mount.”

Which will work only if the Google has indexed the page.

It should go without saying that just because something appears on a web page doesn’t mean it exists, is intended for public consumption, or is available for sale… While this was a fun find I personally wouldn’t even try to order it.

Not a bad idea…but yikes at $5 bones or 1/4 of the price of the original hardware $20 for plastic and tape?

Now I know the reason everyone should have a 3D Printer!!!

There just aren’t that many people craving the ability to churn out their own baby Yoda figurines.

True…and everything costs something! Good idea either way, and I’ll have to try one and see what kind of improvement can be had setup wise though a window.

Thanks for taking the snark well. I couldn’t help myself.

(Also I’ve yet to see a trustworthy product produced through 3D printing… but I have little personal exposure to them.)

Exactly and no worries… I still need to buy a 3D printer, but need something in the $500 range that breaks my bank for what I’d like to print tall and wide.

In all actuality…the time it would take for me to Sketch-out design in a CAD and then send out for printing…I could have purchased three (3) plastic/tape things for my three cameras that I’ve already received.