Is it known if you can use a magnet to mount the new motion sensor? I want to mount it on ceiling

Only the contact sensors use magnets, so I don’t see why you couldn’t. Please keep in mind YMMV.

Thanks for responding. I didn’t think so since the cams are ok with them.

Has anyone tried this? I would also like to put a magnet on the back of my motion detector. Thanks.

I tried it. Works ok. Only needs soft refrigerator type magnet really. But, if you go to move it just like with sticky tape, if a strong magnet, the back pulls off… Which did make sticky tape removal easier but the back is Fragile! Be careful not to crack it and be sure to align it correctly when putting it back on If it comes off while moving it, it only goes on one way. I know how strong some magnets are. It doesn’t take a heavy magnet just warning.

thanks very much. This will make it much easier for me to Mount the motion detector on my metal carport.

Using a magnet effects the signal strength and your detector could get stuck in motion detected mode. I noticed some users posting that but I discovered the magnet is the issue

I just made this for the PIR detector. depending on your needs and abilities this might fit the bill. you could hypothetically mount this in MANY places, even without the screw, 3m command strips are a miracle. and no magnets to interrupt signal.

so…I know I know…they are for indoor use…but i have to try. So I wanted to mount two PIR motion sensors outside to trigger cameras. I have well used busy streets by my house and headlight/ shadow false alarms are a constant hindrance. so obviously motion sense were a godsend…if only I could mount them. the issue is that I am pretty close to the road ergo the full range would pick up every passing car…and I’d be back to square one. so…if only I could find a way to mount them so I could angle th…

jfalbo, In reference to your response about using magnet to hang morion sensor, were you using a strong magnet, industrial ceramic or neodymium magnet? Or just the simple flexible rubberized refrigerator type? I am really interested because I am now worried about performance. Thanks

I am curious now and am not completely sure by your explanation, Does the motion sensor pick up headlights or the cam does. Because yea, I know my cam picks up headlights and I am looking for a way around it. I have motion sensor on my lanai ceiling but only one so far.

the cameras just by themselves detect “motion” based on a percentage change of pixels. so shadows or changes in light will be seen as “motion” for the cameras and trigger it to record. the sense kit ( containing a PIR sensor) works on changes in heat in the environment. PIR stands for passive infrared. so in the dark it would detect a body where the camera might not see anything. because it works on strictly heat and not just a change in pixels, shadows and headlights will not trigger it. one thing I’m noticing about my setup is that it is pretty darn sensitive. currently there is not sensitivity settings for the PIR detector and it seems to pic up big things from farther then the stated 26 foot range. I haven’t had time recently to play with it and test the limitations, but I will sometime this week I hope if I can ever get off duty.

I have had the same experience with my motion sensor picking up unwanted street traffic. So I used a temporary cardboard mount that held the motion sensor at a 45° forward tilt from vertical.
This configuration reduced the forward range enough to not sense the street traffic while maintaining substantial side sensing.
I liked the way it worked and decided to make a permanent 45° mount. I thought about bending some 1.25" aluminum strip for the mount but maybe the metal could interfer with sensor transmission. So I went with plastic. I went to Tap Plastic and had them cut some 1-1/4" strips of 1/8"
PVC. See pictures.
Victor Maletic
P.S. Those with 3D printers could easily print one. 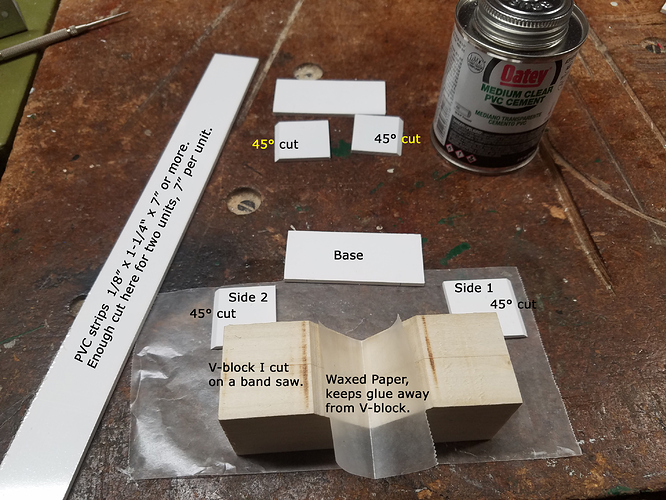 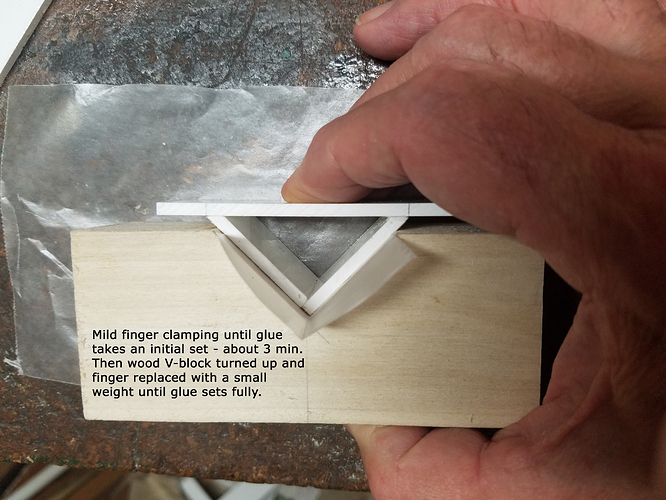 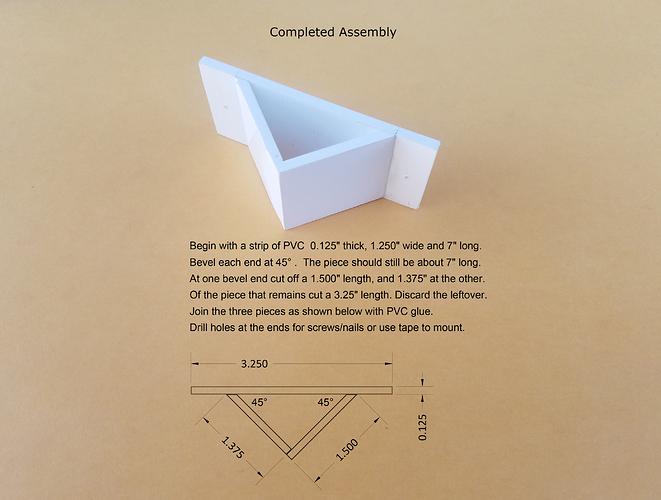 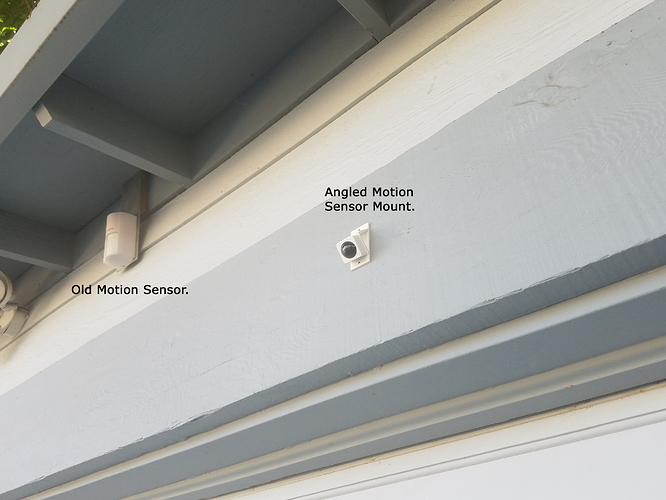 I literally just a day ago made a new and adjustable mount with a different base. When I get home I’ll try to post a picture of my new set up. but for simplicity…YOURS IS A GREAT FIX!!!

doo you just tilt the base if you want it more left or right though?

If I wasn’t able to occupy the ideal location, I would rely on side aiming. It would consist of a strip of PVC glued to the left or right vertical edge resulting in a corresponding right or left aim angle. The width of the glue-on aiming strip would be determined from taped on trial strips. The mounting screws/nails may need to be longer.
The upper surface of the bracket can be used to attach sun or rain shield.
Victor Maletic

After awhile I realized that tilting the motion sensor 45° wasn’t capturing activity near the sidewalk (but still don’t want street traffic).
I decided to try 30° downward angle. Instead of cutting and fitting individual pieces together with glue, I would try heat molding. The pictures describe my approch. It worked very well but probably is not for most people. My next project will be an adjustable/fixed solution.
I’m very happy with the sensor results at 30°.
Victor Maletic 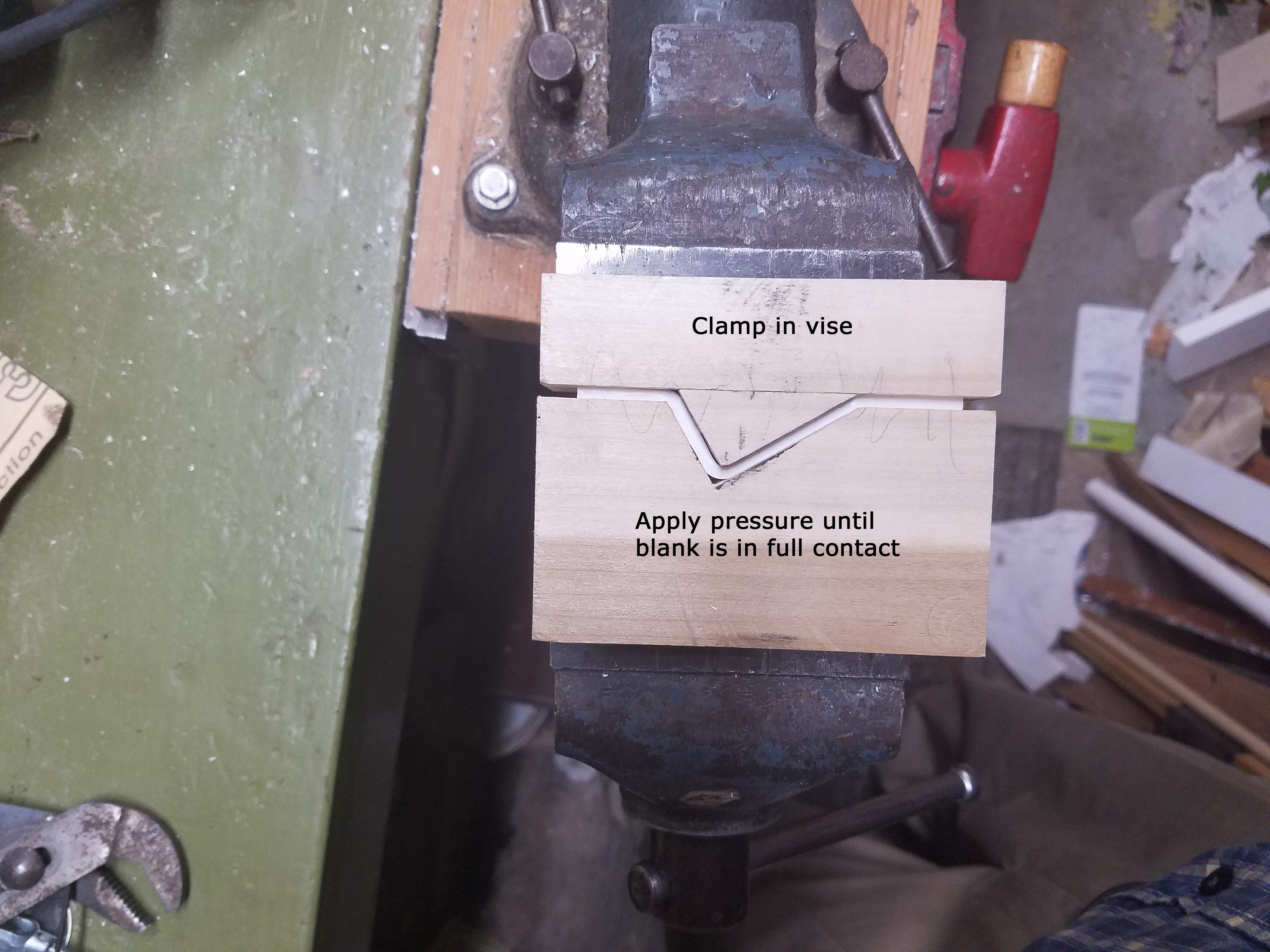 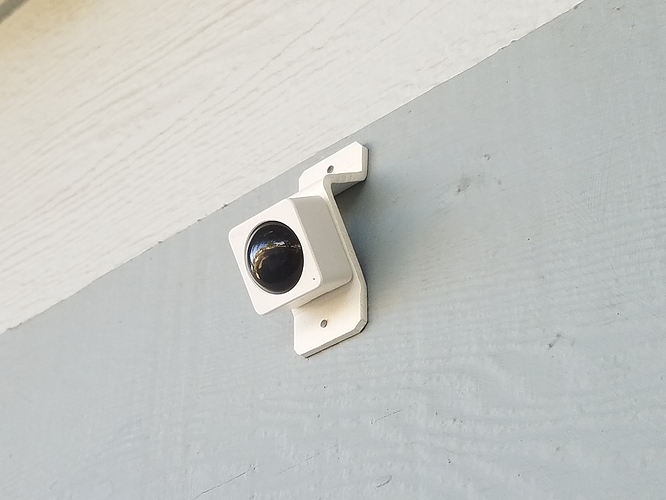 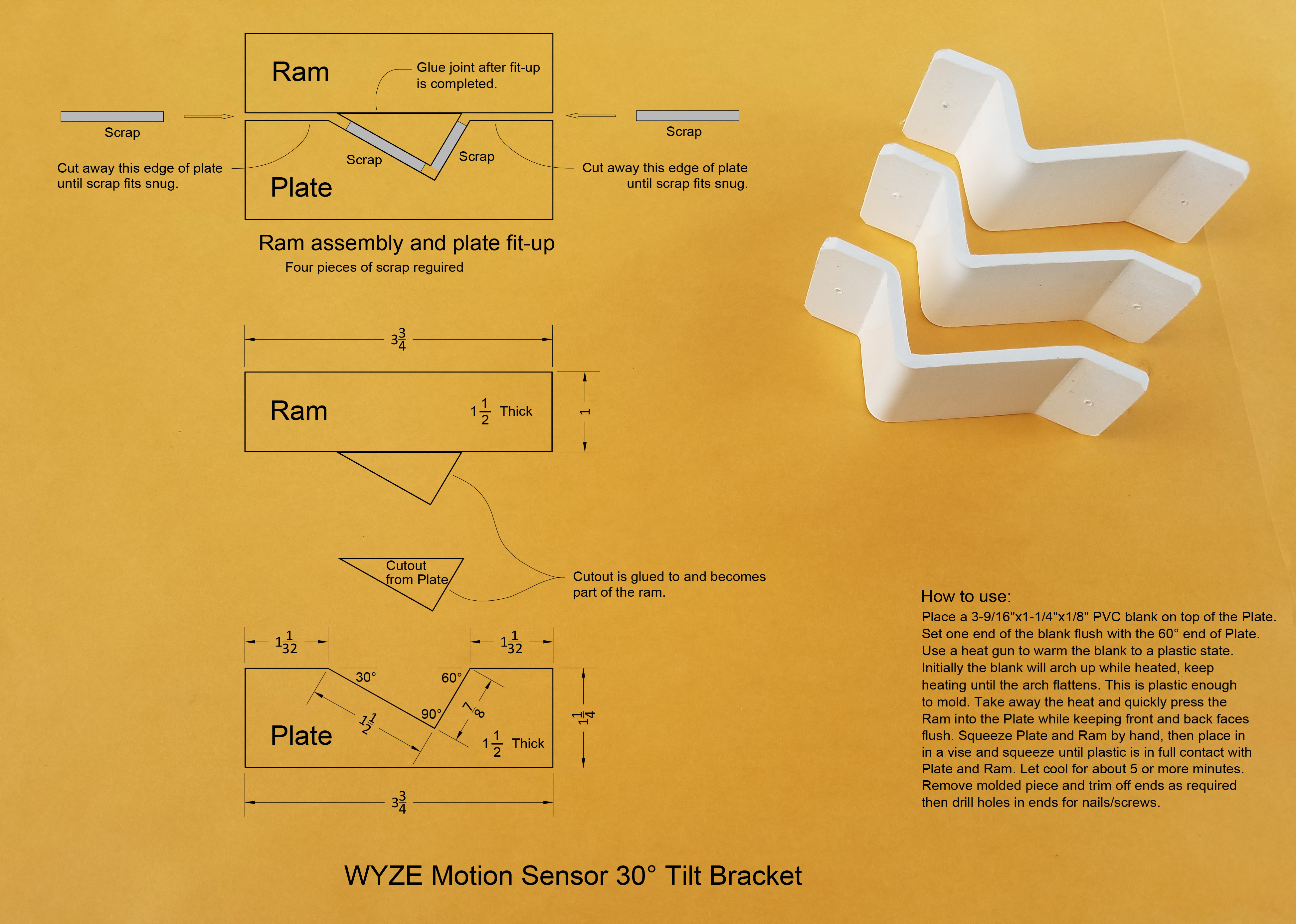 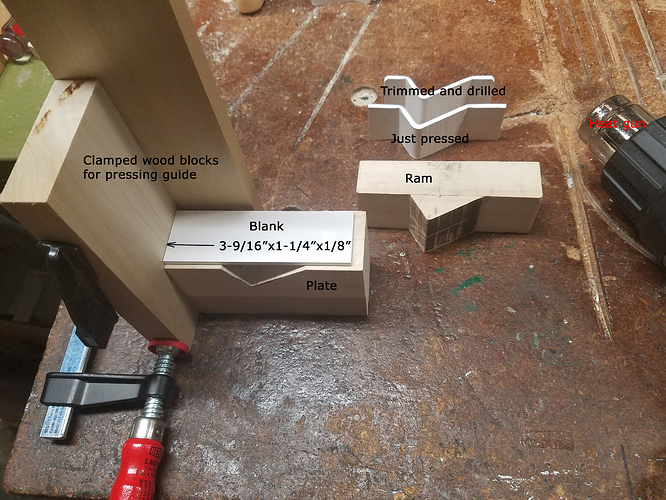 @victormaletic so I said I would post my newest mount

its taken longer than I thought it would but I have now delivered. 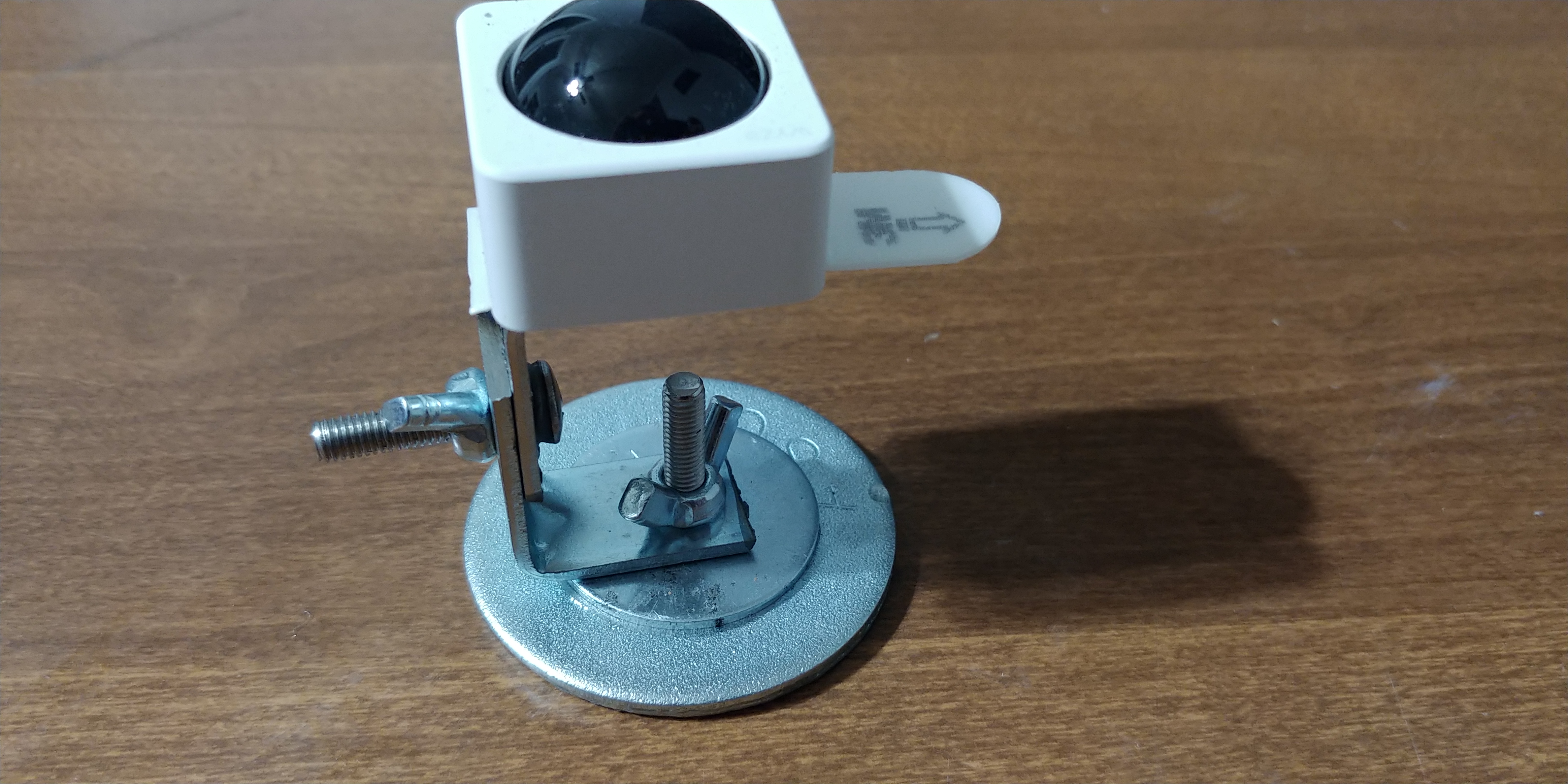 its similar to the last sensor mount I made, but I decided I wanted to make this one movable ( via command strips)

to do that the base had to be solid…go epoxy!!!

this also served a dual purpose as it holds the bold in place so loosening the wingnut to move the mount is a lot simpler. 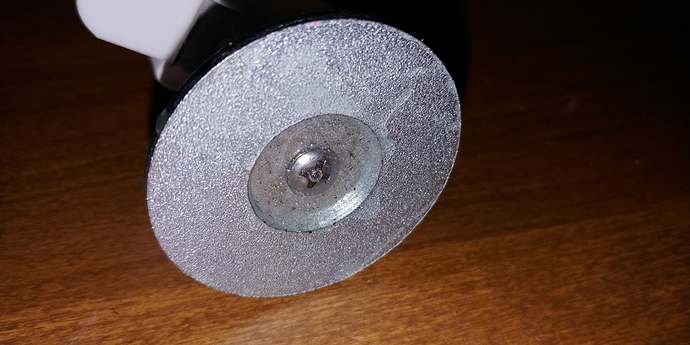 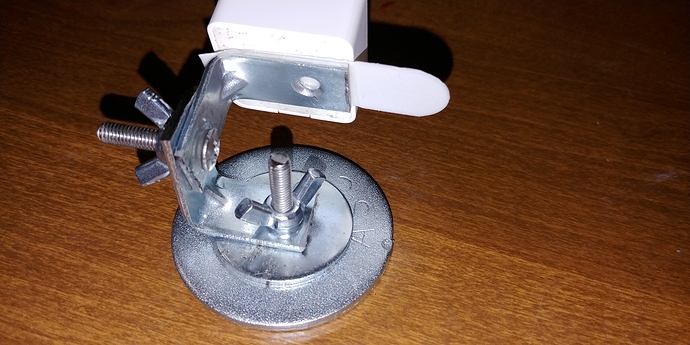 Very simple and clean. Maybe even cleaner if the horizontal bolt was reversed so the wingnut is on the inside. Should be able to tighten or loosen as needed.
Victor Maletic

In my previous reply about reversing the horizontal bolt I forgot to note that a shorter bolt would be needed.
Also, how are you attaching the washer base to its mounting surface?

those bolts were all I had in my box. didn’t want to make a trip for just those lol

and I use 3M command strips to mount it because they hold well and are so simple to move if needed.

I agree on the command strips and also avoiding an extra store trip. That’s why I combind my shopping trips.

After making two different angled supports (30° and 45°) out of PVC plastic for mounting Wyze motion sensors, I decided on an approach that only requires basic fabrication skills: measuring, sawing, gluing, drilling, taping and scissoring of cardboard.
I begin with a piece of PVC 1/8" thick by 1-1/4" wide by 12" long obtained from and cut by the local plastic supplier. A 12" length is more than what’s needed for the finished bracket. The extra length is to provide grip for home cutting of the short pieces that will be needed for a completed support.

The following pictures save a lot of words: 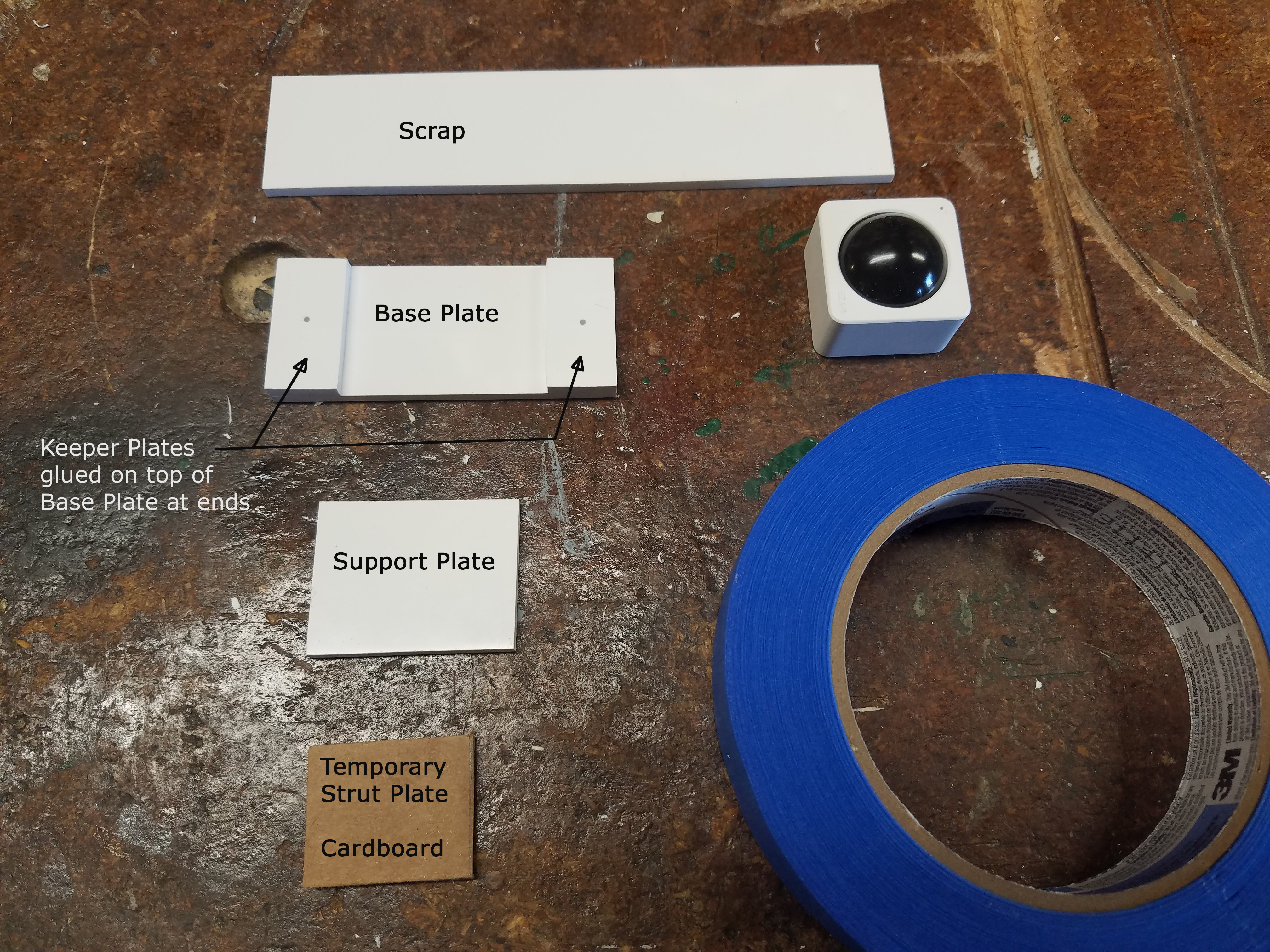 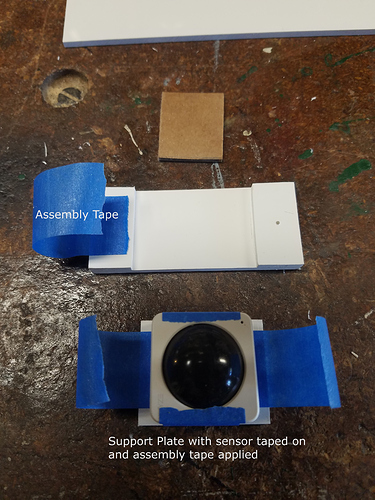 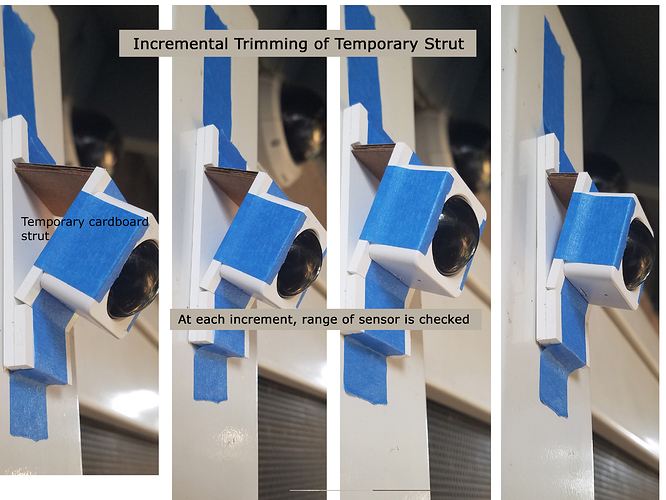 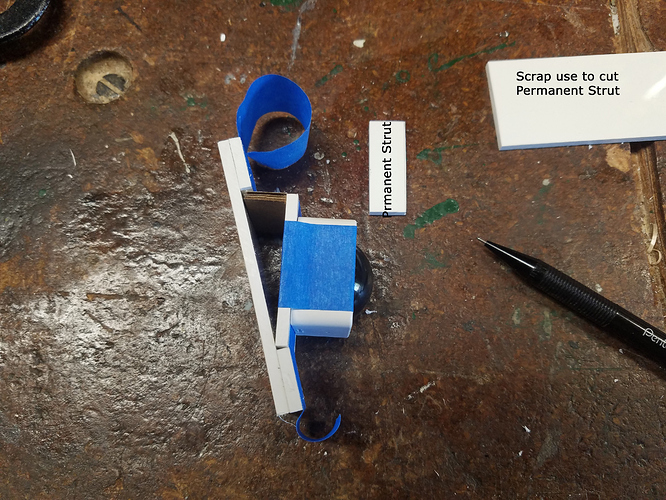 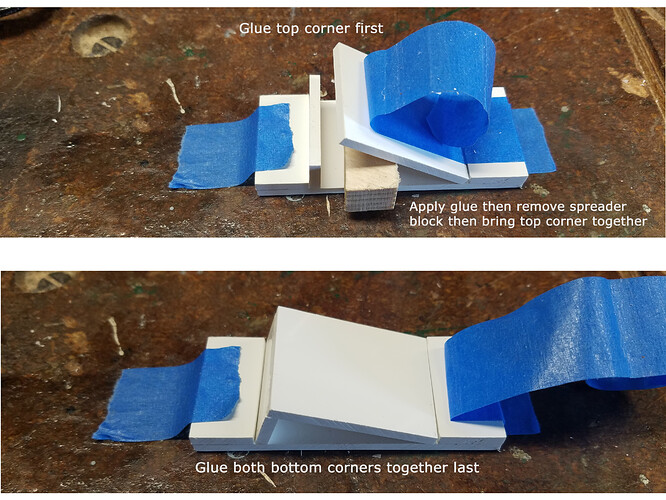 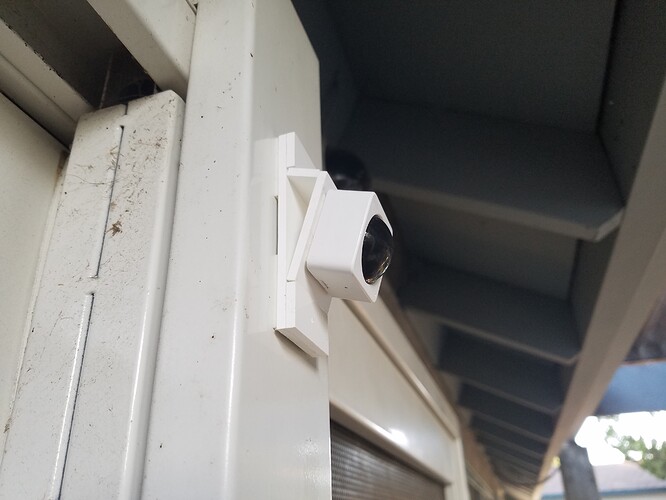