so…I know I know…they are for indoor use…but i have to try.

So I wanted to mount two PIR motion sensors outside to trigger cameras. I have well used busy streets by my house and headlight/ shadow false alarms are a constant hindrance.

so obviously motion sense were a godsend…if only I could mount them. the issue is that I am pretty close to the road ergo the full range would pick up every passing car…and I’d be back to square one. so…if only I could find a way to mount them so I could angle the FOV of the sensor…hmmmmmm mad scientist engage…

my first foray into this idea was to buy a piece of aluminum and just bend it to whatever angle i needed…this is working so far for the front door…so it will stay just a while longer.

this is simply a piece of aluminum bent and using 3m command strips put the sensor on it, and mount it to the house. 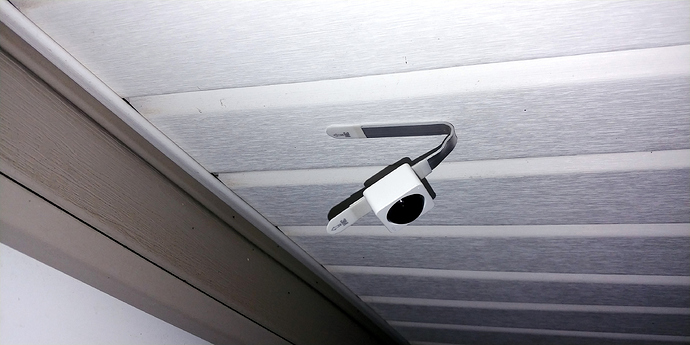 the front porch…with the camera it triggers in the window on the left…one of the times I think a white camera would have been more beneficial. 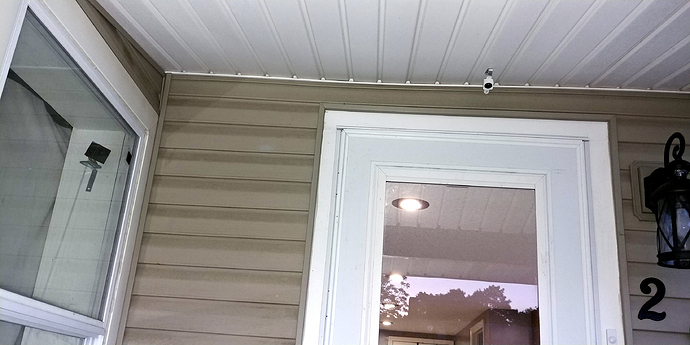 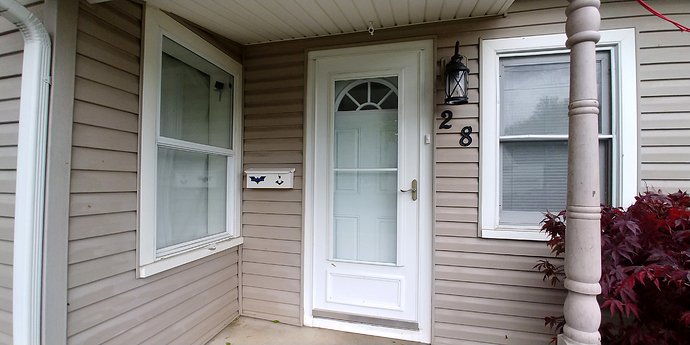 but what do I do for the other side of the house?..my garage driveway…mad scientist take 2…

so for these, because I could use a screw instead of a command strip for mounting and wanted far easier adjust ability…

I took 2 right angle brackets…I cut them down smaller because I didn’t need the full size. the homemade bracket will be held together with a small bolt and a wing nut so I can adjust it without any tools 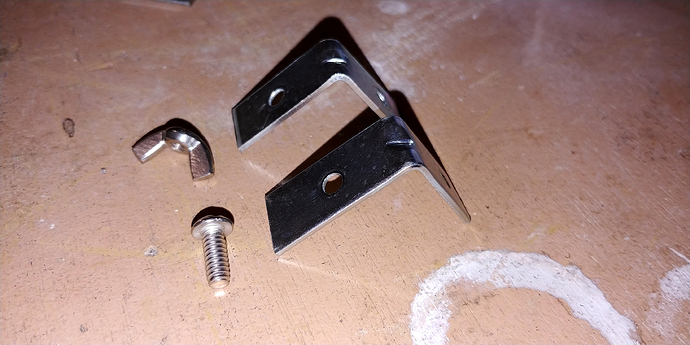 they will be mounted together like this so it will adjust up and down. and side to side 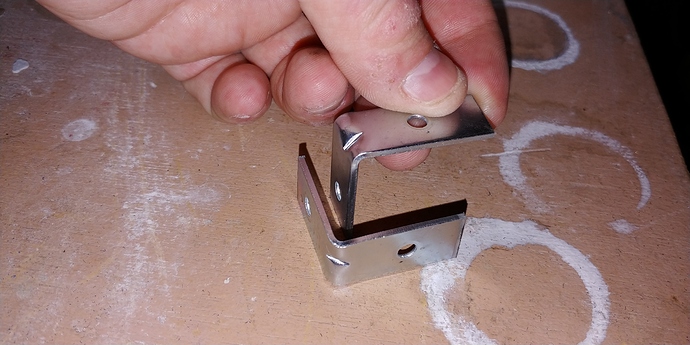 here they are together…and showing the adjustability they will have…sorry for the crudeness of the edit, but you get the concept at work. 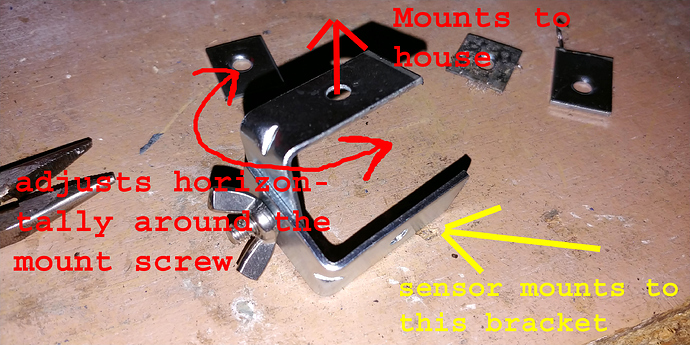 and here is the bracket mounted. you can see the ability it will have to pivot. 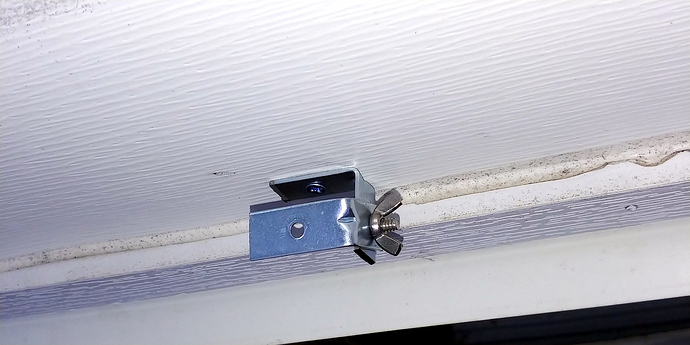 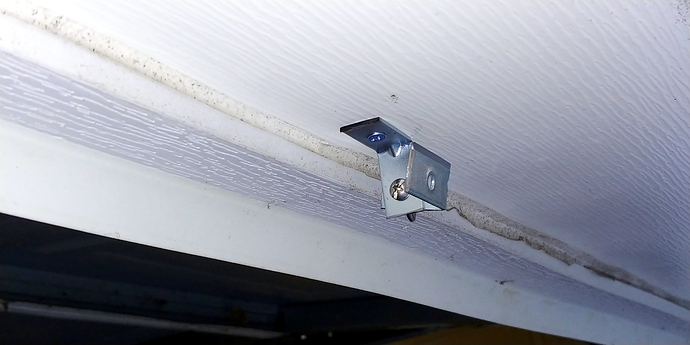 so here is the bracket and sensor mounted…I used a 3M command strip ( they are wonderful) to hold the sensor to the bracket. because the command strips have a small tab used to remove it I just folded that back and taped it so its not visible but I will still be able to easily remove it if I get the urge. 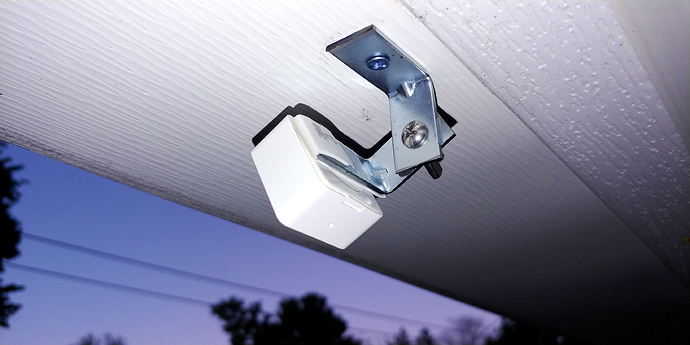 here is the reason I needed to be able to adjust it…the street is way to close and would give me false alerts if I hadnt gone this route. 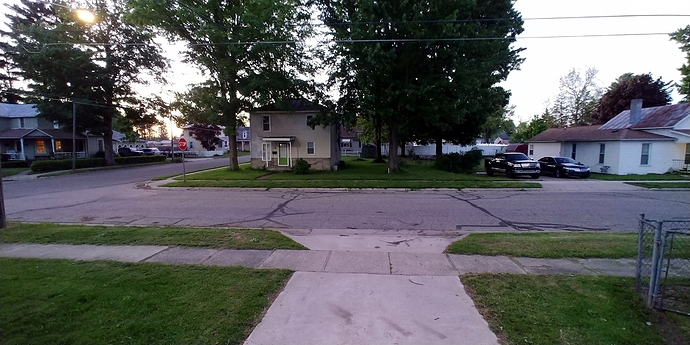 and for those of you asking about it being protected from the elements…it is above my garage door under an overhang. this should be more then enough protection, and typically weather here doesnt come from the north side which this is on. it is pretty conspicuous so I’m not too worried about it…and for the price point this is a valid test anyway. so here it is. 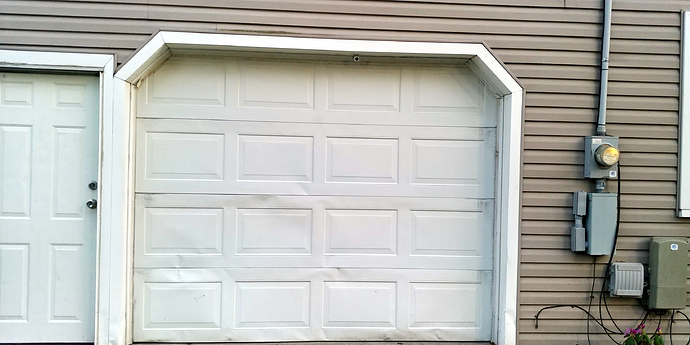 all and all I’m glad with the outcome. I have it set so it will pick up the sidewalk, but not the street and it will trigger 2 cameras on the north side.

and here are the two views it will trigger 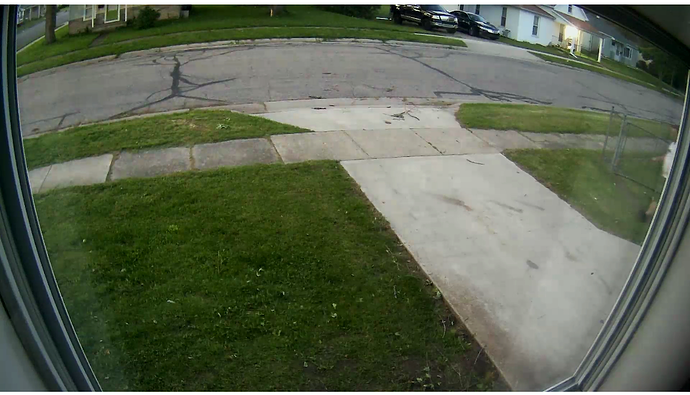 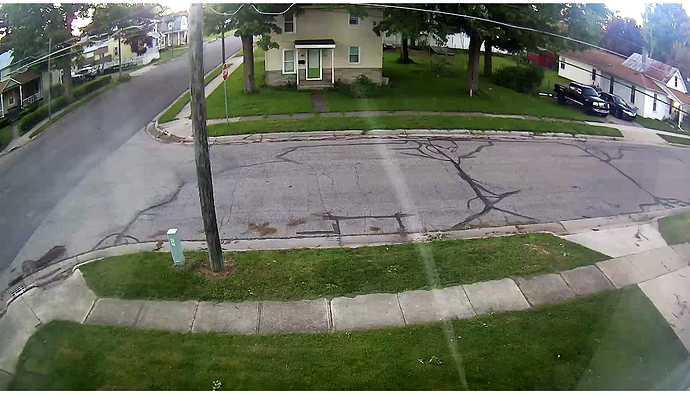 let me know what you think of my harebrained idea. not bad for a 10 dollar mount investment.

Interesting solution. Curious why you went motion sensor route instead of mounting the cameras there?

I like your bracket idea that allows to control and reset angle as needed. Thanks for sharing!

I did the sensor for a couple of reasons. 1 I wanted to avoid shadows and headlights giving me false alerts. a huge pain. 2. considering this is within reach of anyone, its only a 6$ investment if someone decides to try to steal it. 3. far less noticeable than a camera

4. this one sensor will trigger 3 cameras vs a camera only triggering itself meaning a camera with a possible better view might miss something without using this sensor. 5. because of the limited ability we currently have for detection zones, a couple of the cameras cant capture where I need.

there were a few reasons

And one more reason you may not have thought of… there is no five minute timeout on event clips triggered by the motion sensor (as opposed to the camera’s motion detection).

Note: you won’t get another clip until the motion sensor becomes clear (which takes a minute) and triggers anew. So essentially you’ve turned the 5 minute timeout into a 1 minute timeout.

very valid point. I hadn’t thought of that one.

Bam.
There are available small printed swivel mounts for motion sensors on Etsy or Thingverse. Onty a few bucks.

and I never know what that mount might be useful for later on. Wyze came V5 maybe? Smaller? Weather resistant? Fusion powered? There’s just no telling