DO NOT USE the "Close the Garage Door Rule or Shortcut" until you understand that it might OPEN, then CLOSE the garage door

Do not use the “Close the Garage Door Rule” if it operates the way mine did.

Perhaps my garage door is the only GDC that functions in this manner, OPENING a fully closed Door, just to Close it 44 seconds later.

Maybe I am not using the product and/or Rules Correctly?

Wyze… was this the intent of the Rule that Closes the Garage Door? Open it, just to Close it, when it’s already closed?

I’d of preferred that the GDC recognized that the door was already fully closed, and left it alone.

Mine does exactly the same thing. I had to delete the schedule until Wyze fixes this.

I am sorry this is happening, reporting this to the team now

I had this problem at the beginning. I believe it happened because I did the initial calibration between the Camera and the QR code. I then adjust the camera slightly to point more towards the right while still keeping the QR code in view. Finally, I set the rule to close the garage and it would close then reopened. I was able to resolve the issue by re-calibrating. I believe the camera is looking for the QR at a “close enough” specific location and it couldn’t find it so that’s why the rules failed.

Thank you for the info. I’m thinking that is probably what is causing my issue, as I recall moving the camera once after that initial calibration

I’ll re-calibrate and test this weekend.

Is there any way for the camera/controller to detect that calibration is needed, and at a minimum send a notification of that fact? And if it can be detected that the camera is out of calibration, to disable running of this rule?

What you can do is to re-calibrate the QR code in the settings, and make sure the IR night vision is in the Auto mode so the QR code sticker is always visible in the camera view

Hongfei,
It appears the re-calibration resolved the issue.

But, i still don’t have high confidence in using the Cam & QR Code to determine if the garage door is closed or open.

Is there a certain distance range the camera should be from the QR code? I mounted my camera a little behind the garage door opener, the QR code looks a little fuzzy on the camera view in the app (gotta get 2k cameras out!) and I wasn’t sure if that was causing an issue or not.

EDIT: I found https://support.wyze.com/hc/en-us/articles/5590002928155-The-QR-code-won-t-calibrate- , which says it should be between 3-15ft away. Mine is at 13ft, so I changed the Night Vision IR Lights to be “Near” since it’s inside a a garage, and did a re-calibration. Hopefully that solves it!

I too have an entry sensor on my garage door. What I would love is for wyze to add conditional rules. Then I could say:

I ended up having to make my own QR code because the sticker was too small. My camera is a little further back than specs suggest, but I wanted to be able to see more of the garage than just the door. Took some patience but now it will calibrate! 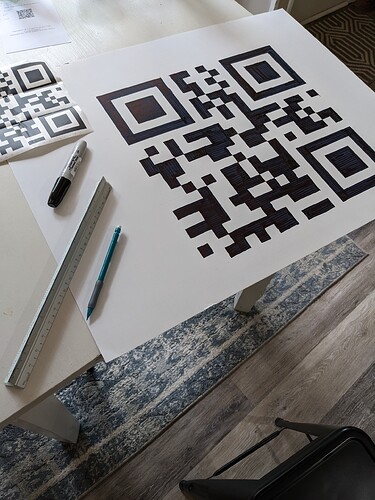 Rule definitely has some bugs. I’m getting the door to close at the time checked. But then re-opens the door a few seconds after it just closed, Then sends a notification that the “Garage Door scheduled closing failed at xx:xx time”
I can use the on screen “Controller” button to close the door and it stays shut.

The re-calibration works fir about a week then it starts opening/closing again at the time the rule is set for it to be closed. About throw it away!

The re-calibration works fir about a week then it starts opening/closing again at the time the rule is set for it to be closed.

And that is the reason I have low confidence in the GDC at auto closing my Garage Door for me.

Prior to the Wyze GDC being available, I already had another product in place the system (Chamberlain MyQ , I found it on sale for under $20 at the time) It has the ability to close my garage as well if left open as well. I’ll be testing it’s ability to provide those services.

@WyzeJasonJ can you provide any details on the issue or planned resolution?
Also maybe a detailed rundown on how the GDC with the QR actually works would help the community improve their own experience while we wait for an update to rollout.
My controller based on the rule opens and then closes every night instead of just confirming it is already closed. Then I get an alert it failed but in fact did succeed at closing.
I am out of town for days at a time and am dealing with this security issue opening my home physically to strangers when I already have Home Monitoring and CamPlus…

My controller based on the rule opens and then closes every night instead of just confirming it is already closed.

I lost confidence in using the GDC to auto close my door on schedule after this happened.

I still use my Wyze GDC to view my Garage Door that I can’t do with the MyQ system. I think this is an older MYQ system, but it does what it’s asked to do… close my garage door on schedule without opening it to close it.

Perhaps the MYQ system using a sensor on the garage door instead of a the QCode is a better option?

I also have a Wyze Entry Sensor on my garage Door rail that I use to announce “Garage Door ‘opening’” as well as “Garage Door Closed”… I wish Wyze would give the GDC the option to use that sensor to determine if my garage door is closed or not. (this would be a good option for those of us that are invested in the Wyze Sense ‘system’

I’ve had my garage door scheduled to close at 9p for a week now. The door is usually already closed by then, so the app tells me it failed to close, so that’s fine. But, the two days that the door was open at 9p, the door closed, then opened right back up. Has anyone run into this problem yet?

Its doing to because it doesn’t recognize the QR code anymore and doesn’t know if it’s closed so it executes the action and will open your garage. If you recalibrate the QR Code it will fix it but a week or two later you’ll be back with the same problem. I am about to just throw it away…

Thanks Abuse, I’ll try it.

Hey Good, I don’t see how to recalibrate.