Correct, to do everything through Alexa, notifications aren’t needed.
My comment about notifications was solely for Google (google doesn’t have person detection triggers as an option like Alexa). So, you can have TASKER watch notifications on your phone, and when it sees a notification from Wyze/WyzeBeta and if it sees a notification that starts with “Person detected on Front Cam*” you can then tell Tasker to broadcast a message through a Google Home speaker saying “Hey Google, show Front Cam [on office display…or on Family room TV that has Chromecast, etc]” and it will then work that way (once the Wowza server are upgraded, etc). I was simply pointing out that you can do all these same things on Google, but with Google you need to watch notifications to trigger a broadcast, but with Alexa, the PD trigger is already built in.

This is all awesome stuff!

I just mentioned the notification thing so that other people reading this would know that they don’t have to do that when using Alexa devices.
You are basically getting a notification when the thing starts talking anyway.
I don’t use Google I have one of those minis somewhere has n’t been plugged in for a long time.
The notification setting for person announcement in Alexa for a wyze camera is separate from a routine you set that in Alexa after you select the individual camera

I think you can do this without having two echo devices within earshot of each other if preferred. It might even work if you had no echo devices and only had a firestick.

The “customized” basically does whatever phrase you input as if you actually spoke it out loud without actually having to say it. 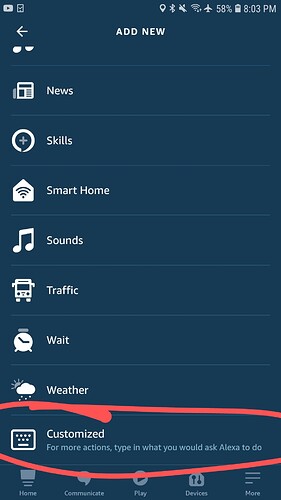 Good idea
@Mods if you could move the posts about Alexa and declutter this thread it would be great , thanks
Here Alexa integration tips and tricks

Dude, you’re a genius! It totally works! No announcement necessary, go straight to streaming the cam on any Alexa Device without a verbal command! This is awesome!

Pretty dang cool. GREAT JOB EVERYONE! This is an AWESOME benefit to automating Wyze Cams to automatically show cams when they detect people. You could keep track of your kids while you work, or always see who’s at the front door when someone starts to walk up, or whatever. I am going to set up an Alexa Show right by Front Door to always automatically load the front cam (and eventually automatically load the Video Doorbell Cam) so I can see on the screen who it is at the door before I even open it or look out. This is incredible work!

Special thanks to @HDRock & @kjay for brainstorming and help & @FritzThird for the initial idea and now posting a video example for the FireTV. This is AWESOME!

No problem! I can’t take full credit since a user posted this method somewhere else. If you have a sense motion sensor you can get it to load a lot faster as the trigger is instant and you dont have to wait for a clip to upload and AI to be run on the cloud before getting a trigger.

I actually dont have this active right now as I dont want to use my TV for this. I was considering maybe using an old monitor and getting another firestick to dedicate for this or maybe a fire tablet (wasnt sure if a fire tablet would work with this method).

It’s a shame the google hub is so inferior at the moment for this purpose since I already have one that is ideally placed for this.

@Mods - guessing the best breakpoint on those posts dedicated to Alexa are:

Yeah, I used to use a sensor near my porch to trigger faster, but have needed a replacement for months because that one died and V1’s have been unavailable, so when the new ones get here, I will do that…after waterproofing it

I have heard/read you can do some stuff with Googles using webhooks, but I tried some of the instructions and walkthrough for such things, and couldn’t get any of them to authenticate, and I’m not a techno-n00b by any means…so I’m sure it can be done, it’s just really complex.

I used webhooks with IFTTT for a while before the V1 sense was integrated with alexa routines. After using alexa routines I don’t think i would use another service that wasn’t as simple or straight forward to implement. Too much work and this stuff is suppose to get easier

I set it up with the custom, then the last step you have to select which device Alexa will respond from and I just selected the fire tablet, walked in front of the camera , the tablet says OK and then shows the camera view, no echo dots involved

EDIT : BTW when the action is activated it will wake up a dark fire tablet and then show the camera

Nice! I might need to shop for a fire tablet then.

if you want to keep the knock knock thing you can try something like this. The change device volume command is there to cause a ~1 sec delay before the next action (may not be necessary but sometimes I have multi action routines fail midway without a slight pause). Alexa has a wait command but the minimum interval is 5 sec: 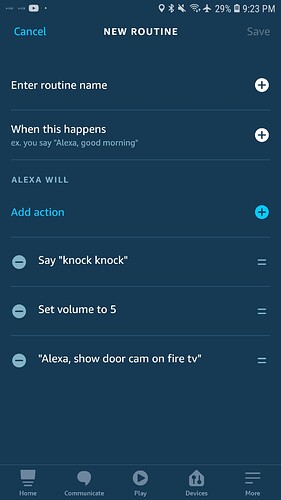 That’s a good tip. I noticed the delay was 5sec minimum too. The problem is that the routine was the action: messaging - send announcement - to all devices… So it wasn’t just directed to the one cam. I’m not sure if the same routine can run 1 action for all echos, then a second action for just 1 echo because there should just be 1 option per routine for which device(s) that routine uses.

Worst case scenario I could do a separate routine for each individual echo device to say knock knock then have the office display show the cam, but that’s a little tedious. We’ll see. I’ll test it out during the daytime sometime. Thanks for the tip on the shorter delay!

Do you mean like this? The ability to send an announcement to every Echo device?

I have Alexa showing my cameras on a Fire Stick, no problem and so far no time out.
The same cameras connected to the same Alexa account on my Fire HD 8 tablet gives the “Your Alexa enabled device does not currently support that.” message. It did work once.

Edit
Alexa timed out at ~3.5 hours this morning.

Isn’t this the best and quickest way for most users to have Wyze display on FireTV or other display?

Much appreciated for your reply. I like creating my own routines, so I didn’t know that part was limited. Maybe they will update that part of the app to make it easy for those that don’t create their own routines.

You are right. It couldn’t be any easier than asking Alexa.