Hi @CapeCodTodd , do you have a SD card in the device which the blue indicator light is off? If so, could you get the log in the sd card, which has a file name as upgrade.log for me to do more analysis please?

I tried again to update it today… And the update was successfull… the blue indicator light is still off, (It’s on in settings for the camera, however), and the camera is working…

there is no SD card in that camera…

Could you submit a log with that device so we can take a look why the blue LED is off?

I did not kill or force close the app…

however, just now, I went into the app settings, to clear the app cache, and noticed The toggle for " leave running in background" was off (it had been on, but it must have been somehow switched off after the last update) 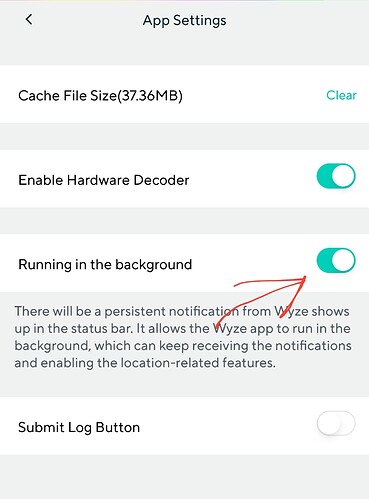 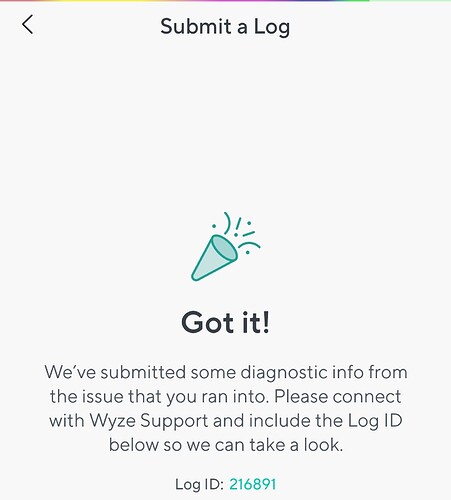 Hi @spamoni4 we found the problem while it seems a little harder than we thought to solve it. We’ll fix it as soon as possible.

You all rock. I appreciate the feedback.

I don’t think you’re in the beta program. Please maker sure you have enrolled the Beta program. If not, you can join it through Account–>About–>Beta Program. Once we release the beta version, you’ll get the latest version from Play store for Android. For iOS, you need to install the TestFlight first. For more information about the Beta Program, you can find it on the Beta Program page.

update… I was wrong. I’m still not getting notifications…
I did get one when I turned on keep app running in background, which had been somehow toggled off after the latest app update…
but today, none of my sensors are notifying when triggered…

For now, all you have to do is start the app and don’t close it. I am doing that until the fix comes out.

Easier said than done when you’re in the habit of closing all apps when you’re done with them… I’ve been doing that for years, It’s a hard habit to break…

I hope the fix comes soon…

That’s the truth. I close it often and then realize it later in the day. It’s is a hard habit to break.

Hopefully it will be fixed soon.

Several people are having an issue with repeated rule triggers. This is happening on both the old rule engine and the new rule engine and both Android and iOS. It is happening with Wyze rules/routines and also with Alexa routines using Wyze devices. See this thread for example:

Starting some time last week whenever my V3 cameras, that have CamPlus, detect a person they will trigger “person detected” somewhere between 5 to 10 times over and over. Even if it’s the same person and they are only in view of the camera for a few seconds it keeps happening. This shows one event (Amazon delivery person) trigger in the rules history 9 times across 2 minutes even though the person was only in view of the camera for about 10 seconds. [IMG_0090] This is the rule that this fir…

It was so bad that my wife told me that since I couldn’t fix them to only run once like they used that that I had to remove a bunch of routines so they would stop annoying her like that.

It seems mostly related to Person Detection routine Triggers in the Wyze engines somehow. Something you guys changed a few days ago around the time of this thread being posted. And as I said, it’s happening with both the new and the legacy engine.

@MyBoredMind submitted a log already for his experience with the Wyze rules: 217097 And he has screenshots in that thread you can look at.

pdate, and firmware updates on the v2s, v3’s & pan cams, I’ve lost all my notifications on all my sensor and camera activity…

We’re in the process of the notification issue.

@carverofchoice @MyBoredMind Sorry for the inconvenience. We’ll look into this issue.

But came back after I went to edit.

Do you mean after you edited it, all the shortcuts came back to the home page?

I wanted to pass this on to you. I was working with qsun on the notification issue, They provided me with a Wyze Push App, which is basically a version before they release it for Beta testing and review. I can confirm that the notification issue has been corrected and should be out in the next Release Candidate.