A lot of disappointment. The watch 44 feels more of a proof of concept than a quality product. This watch feels to have more real estate unused on the watch face area than what is used. To me, it felt as if it looks like when PC first came out. Large box and tiny screen.

The clock watch face on the advertisement is not included yet. Currently a cartoon version of that ad picture is included as face.

No notifications works yet.

The weather, I am not sure where that info is coming from. My location has no rain and watch shows rainy weather.

I used to get every Wyze product that gets released, but that is going to stop now. 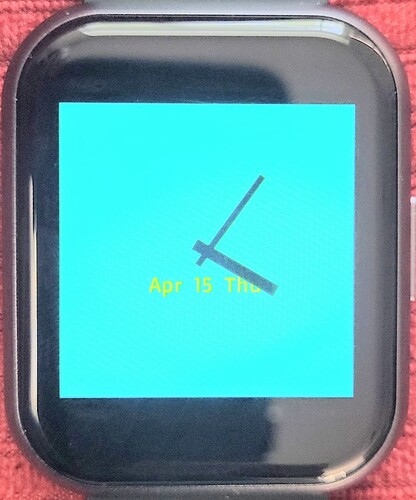 This is scary…are you serious?

Not looking good, I agree.

I received my Watch 44mm and very disappointed. I felt cheated with the screen size only 33mm. None of the watch faces include step count. Notifications dont work. The Wyze band seems a better product than the watch.

I got curious to see how the band and watch shows weather for the same location. It is apparently rainy and not raining for the same time 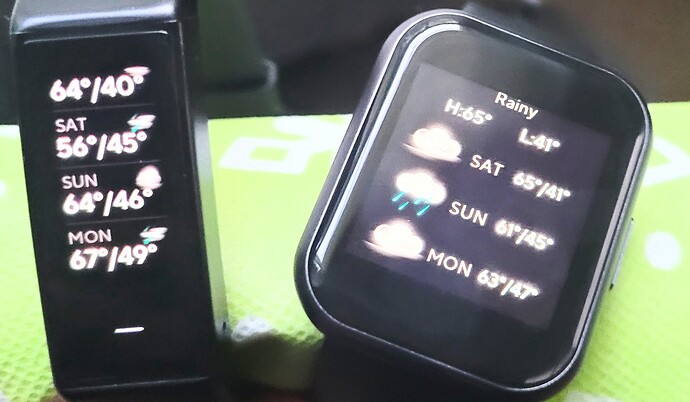 Same here. I was very happy with the band and was excited about the larger screen size.
No notifications yet is my biggest complaint. Phone call notifications but nothing else…

Hopefully an update comes out soon to fix this and maybe add a couple features?

Mercy, don’t know what I expected but this doesn’t measure up yet. No notifications of any kind available. Screen time on way too short, etc. I know it’s inexpensive but holy cow😢.

I just received my Watch 44 as a present. I see the following:

So here’s my question and please note, I’m not complaining, but do we know if it does more than what I just mentioned?

I’m happy with the health things, but I’ a techie so I have to ask, “What else can I do with it?” Can anyone share? I can’t find any info on the watch.

From reviews, it would seem like Watch 47 has been thought out a lot better than 44. The lcd screen is definitely covering most of the watch, where as in 44, the screen is much smaller compared to the watch itself.

How long would it have taken to draw 2 rectangles to show watch size and lcd size, so people can see watch:screen ratio and decide which one to buy?

I now repent getting a 44 and probably should have gone with a 47 assuming, that’s better.

I think my primary disappointment now is the small size of lcd screen with respect to watch size on 44 when compared to 47 (watch size:screen size ratio)

Irrespective of face size, my question is how to get notifications, first and foremost. Nothing I do works: I’m Android 9. I’ve enabled every possible step to receive notifications and nothing sticks. I know it’s not fair to compare this inexpensive little watch to something heftier like my Fitbit Charge 4, but shouldn’t the 44 at least do what it’s advertised to do? Not to mention that at opening it yesterday, I fully charged it and now it’s down 50%. Steps and sleep hours as well as weather are about even with my Charge 4, but seems the rest of the info is pretty unhelpful. Oh well, it was a good thought to try it.

Hi Cathie,
I, too, am having issues with notifications as are many other people. I have a limited number of apps selected for notifications: phone calls, SMS text messages, FB Messenger, Gmail, Google Calendar and Hangouts. Of these, currently only phone calls and SMS work. Early on, Gmail, FB Messenger and Hangouts worked but then quit. Wyze claims in their FAQ that all these apps are supported. I’ve gone through all the troubleshooting to make sure these notifications were selected. I, too, am also on Android.
I seem to recall that there were notification issues with the Wyze band when it was first introduced and they were eventually fixed. So I have to believe that Wyze will sort this out with a firmware update.
As for the battery life, I’ve had my watch going on three days and after fully charging it after opening the box, I’m down to 78% now. I’ve put the watch through its paces so the lower battery level in my case doesn’t surprise me. Your battery level does seem unusually low for such a short time.

For those Android users who are not getting text message notifications: In the Wyze app, on the “Notifications” screen, in addition to having the “Text Messages” toggle activated you may have to tap “Other Applicatoins” at the bottom of that screen and scroll through the list of apps, find your particular text messaging app, and toggle it on. Android can have several different text messaging apps and apparently Wyze can’t figure out which one you are using so you have to activate it manually.

I bought the Watch 47 for myself and the Watch 44 for my wife. We’ve only had them for one day but already I can say that the 44 feels like a very different, and far inferior, watch than the 47. As has already been pointed out, none of the available watch faces include your step counter, which is really a must for a watch like this. And while my 47 activates reliably when I raise my wrist, the 44 is very hit and miss (and mostly miss). And for some reason incoming text messages on the 44 don’t light up the screen at all. You have to press the button on the watch to view the text message. Incoming calls, however, do light up the watch face. And while the 47 isn’t as responsive as I would like when swiping a finger on the screen, the 44 is far worse, and sometimes totally unresponsive.

All in all the 44 is currently a disappointment, even at the price point, but I am hopeful that Wyze will continue to update the watch and it will become more usable over time.

For those commenting about the lack of watch faces for the 44, there are actually some fairly decent ones if you scroll through the available faces on the app (rather than just scrolling the ones pre-loaded on the watch). Sadly, however, none of them include the step counter.

Anyone heard when Wyze might start taking more orders for the 47?

Using the 47 for 1 week…Beta watch at this time. Lot’s of updates (touch sinks, weather not correct town, Message Delete (should have “Are you Sure”)…I can go on and on.

Anyone heard anything on the Notifications? I am not getting anything from any app yet. The size of the screen is a little upsetting but the 44 is perfect for my wrist size and isn’t too bulky which I really like.

Notifications are working fine on my wife’s 44 (Android phone). Well, maybe not “fine” but at least working. Incoming calls pop up on the 44 but incoming text messages do not. They are there, and the 44 will vibrate to let you know that a message arrived, but it doesn’t show on the screen automatically. You have to wake the watch and swipe down and the text will be there on the notification screen.

On my 47, however, text messages pop up on the screen just fine.