The map editor appears to be back again in the Android app (at least in the beta version 2.16.53) and it works well. It allows you to rename rooms, join rooms and split rooms. The split room function, however, requires that the ends of the split line be attached to outside perimeter walls of the map. In many cases this is sufficient. but if your have rooms connected to each other and to a common hallway, the interior walls effectively create an island and you cannot move the split room line to the interior wall to divide the room as desired. So, for example, in my house the master bath and vanity are connected to the master bedroom and separately to the hallway and there is no way to separate and name the master bathroom and bedroom. (I guess if I had left the bathroom door closed during the initial mapping this would not have been a problem…) 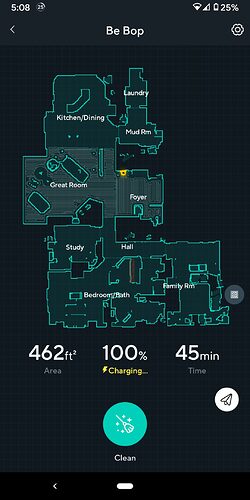 What other observations or suggestions do people have about the editor?

I would like the ability to make more than one split to create a room, for example, my livingroom has two large hallways leading out of it and they both have to be included in the map

i’m on iOS, where do you find the map editor? it’s the one thing i really want to be able to do so that i can separate the rooms and just send it to my kitchen every night vs the whole floor. thanks!

I was able to make multiple splits. You need to do them one at a time.

On Android Beta Wyze app the map editor is an item on the settings menu for the vacuum.

Thanks. It’s weird bc I have the beta app (I believe latest iOS version 2.16.35) but it’s not showing. I’m sure I’ve done something wrong but I show the app is called Wyze Beta so it’s not the standard one but something is wrong. Can’t figure it out. A friend had same version and sees it.

Confirming that for iOS, 2.16.35 is the latest beta version of the app. The map editor should be there in the settings list from the device page.

That is interesting, as it’s definitely missing. By the way, when I go to TestFlight, I see the full version is written as this:
2.16.35 (3)

Does the same version show up for you?

Here’s what I see on my app:

And did you also update the vacuum firmware?

Yes that’s my same version. I’m lost as to why I’m not getting it.

Me too. 1.6.75 and NO map editor function under settings. No way to update/upgrade firmware. Cams did but mainly wanted to test vac

I hate to delete the vacuum and start over but wonder if this would bring the map editor into my version, it’s the one capability I really want with this so I can separate rooms and have it clean the kitchen more days and the living room, for ex, fewer days.

For those of who got map editors, are you able to save and loads maps with all its virtual walls and everything. I am trying to figure out how to use use for 2 floors. I hate loose my current map which I have fine-tuned with virtual walls.

If not, Is Wyze telling when they will support multi-floor maps?

Cannot [yet] save and load maps in the editor. I understand that it is coming, but don’t know when. Editor currently only allows you to merge rooms, split rooms and rename rooms.

My vacuum firmware is 1.6.87. It offered to update and I accepted either yesterday or the day before.

I agree. I understand why it would want to connect the lines on outside walls. But not all houses have that luxury. I need to be able to put the line on door ways. Right now, my den and living room is “one room” because the door way in between is interior. Same with the kitchen and dining room. The doorways are just as permanent as the outside walls, so no reason why the lines can’t be placed there. Hopefully a future update will allow that.