Perhaps something like the link below will work for you while Wyze considers this new product request:

I have an old smart plug (not Wyze brand) that’s behind a couch. This is what I use: 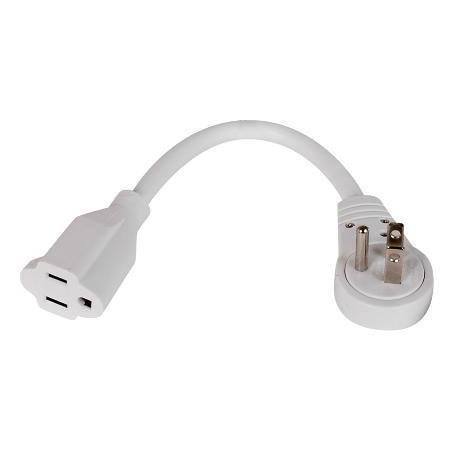 Both items serve a purpose, but it seems the growing trend is to make things that do NOT take up valuable horizontal space, by the time you plug the wyze power adapter into the wall and allowing a little space for the cord to plug in, you’ve lost nearly 6" of horizontal space. I think it would be nice if the company made flush or nearly flush fitting plugs the norm rather than customers having to purchase a 3rd party adapter which looks clunky anyway

This is a sub $20 item. If you want a high-tech power solution, it might end up being more expensive than the camera.

What if it’s clunky? It’s behind the couch.

But some of us don’t have large rooms and every bit of space we can conserve makes the living area more managable.

Why add another electrical device that can potentially at sometime fail?

I would like to see a plug with the standard single male-to-duplex, with dual female out the sides. I want this to be able to plug it in behind a couch and control two lamps on side tables either side of it without needing a power strip.

I second that request, as too many of our electrical devices require power supplies that stick out from the outlet and make it difficult to arrange furniture without making it look like it’s an island unto itself.

Wyze, you can do this And any further power supplies that you have produced should be at the right angle variety so that we can use wall hugger furniture with them

Do you have any plans to make a flatter wall plug for the camera. The plugs stick out way to far from the wall.

probably as likely as them adding a black color option to all future camera orders.

I would LOVE this and am going to buy and adapter off Amazon. We have a puppy that loves to race around our couch. The problem is she keeps hitting the wall plug because it is sticking out so far. Having an adapter like this will fix that problem. I’m going to buy one off Amazon. Please Wyze, really honestly think about this, it would be a simple thing to do and a big help.

It truly is the small things that make the difference

I like the side mount plug idea. Not just for space conservation, but for aesthetics. I have a lamp in the foyer that we just leave on 24/365. I decided to put it on a plug and setup a schedule to turn it off a few hours a day, but it put the cabinet almost 5 inches from the wall and it look weird.

I don’t know if the plug box needs to be as clunky as it is, but ideally it could be made so that the plug slots on the side turned so that things plug in vertically instead of horizontally making its profile even slimmer.

I really wish wyze would use a FLAT plug. These square bases stick out so much and take up so much room. It’s hard to instal a camera in a few places I need it!!

Are you talking about the USB power adapter? I got the impression this topic was about the (AC) smart outlet.

There are 3rd party solutions if you meant the USB power adapter. The user “tsatrans” posted this one back on October 2019:
https://www.amazon.com/Nekmit-Ultra-Charger-Smart-White/dp/B01JLXTQ1U

If you don’t mind slightly more bulk, there is an even less expensive solution:
https://www.amazon.com/Charger-Dodoli-Adapter-Charging-Compatible/dp/B07JHZXCQD

Note they currently offer a 3 pack of that one for only $4 more than a single.

I can’t speak for @Darlene3106, but I’m wishing on a star for a side Wyze Smart Plug. If you’re plugging a device up behind furniture, the furniture has to sit 2”+ away from the wall and just looks awkward. Naturally the smart outlet would solve it, but not everyone can or wants to use a permanent solution like that.

For that, it seems a design similar to one of Monprice’s Stitch plug would be the better overall solution, as it would be useful in a variety of situations where a standard smart plug wouldn’t work. It looks a bit like the short extension in qlang243’s post, with a lump in the middle of the cord for the electronics.

As an example, I use outlet expanders with widely spaced sockets with slanted sides. The older oversized but round smart plugs can fit on the side outlets, but the wide ones like the Wyze that will allow two to fit into a standard outlet won’t.

The current smart plug configuration has the female plug directly in line with the male plug which effectively means that your device plug in will be about 2” thick at the wall plug. If the female plug were moved to the opposite end from the power switch on the current smart plug would effectively mean your device plug in would only be about 1” thick at the wall plug. This effectively gives you a 90 degree plug allowing usage in confined spaces like behind furniture or appliances.

That could work, at least until Wyze moves to plug to the space saving 90 degree. Where did you find an extension cord that short?