Neither of the Wyze Locks will Auto-Lock. I’ve recalibrated, reset, deleted locks, recalibrated, reset the gateway, to no avail. I’ve read other peoples stories and steps about how they got it working, none of this has worked. it is very discouraging.

One of the two locks also has additional problems. It runs out the batteries in less than one day, apparently. Its been installed two days, and is on its third set of batteries. Also at times the motor in the lock appears to be “engaged” - as in I go to manually lock or unlock it, and there is significant motor resistance. This happened during one or two of the calibration attempts I made, so I wasn’t sure if it got confused, or ran out of battery, or what the problem was.
The door itself is a metal sheathed door. Does that matter? I know that some electronic cat flaps have some trouble with metal doors.
I don’t think I can replace the more troublesome lock with the lock bolt because its a nearly completely unsheltered location on my house that gets full direct sun most of the 2-million-degree southern day, as well as full direct rain when it rains.

I’ve bought many Wyze products, but I’m so very disappointed with this purchase. I don’t really understand the positive reviews out there in Smart Lock review sites.

I’m sorry to hear you are experiencing trouble. That would be frustrating. My locks have not had those problems, even on my metal sheathed door.

At one point, one of my doors suddenly stopped locking automatically and saying it is jammed, but I found that was my door’s fault. The door had become slightly unaligned and it was no longer able to easily push in the deadbolt unless someone pulled up on the door or pushed it in while locking it. I had another guy tell me they had a similar problem and they believed that the extra friction on theirs was causing excessive battery drain since when they made adjustments to where it could slide in and out easily their lock battery issues seemed to go away for them. I do not know if any of that applies to your situation, just mentioning they are things you could check and see if it makes a difference for you or why your battery could be draining so badly. I’m assuming you made sure you are on the latest firmware.

I’d call support either way. They may have more ideas about what’s causing those issues, or if they really aren’t meeting your needs, then you can consider if they’re within the 30-day guarantee period.

As for the lock bolt, it says it is IPX5 certified, so that means it is certified for everything besides high pressure water streams and submersion: 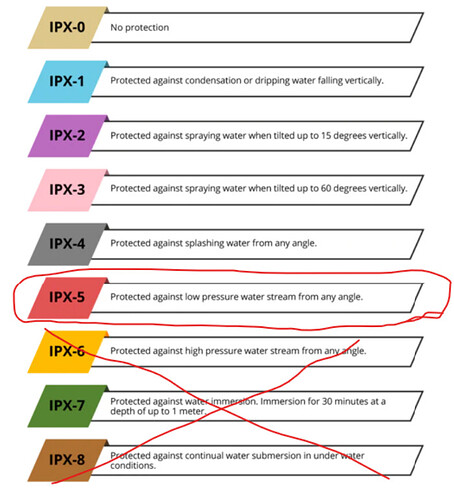 So the direct rain shouldn’t matter.

The Temp specs are as follows:

Direct southern sun may be an issue. IDK.

Thank you very much! This is extremely helpful. I suspect that in the middle of summer a black keypad that gets 8 hours of direct sun on a metal door on a day that is 95 degrees out will have no trouble easily surpassing 122 degrees. And when I say rain, I don’t mean only rain showers. I mean also tropical storm force rain driven against the keypad on occasion (it gets driven in under the door too when that happens).
I think this door is simply not a good candidate for the bolt lock keypad. All I wanted was the auto lock and remote lock. (Remote lock also doesn’t work because the batteries are dead after a few hours.)

I will mess with the bolt a little more to see if there is any detectable friction before I just return the locks.

I don’t really understand the positive reviews out there in Smart Lock review sites.

Because it works great for many of us.

I am glad it was helpful.

Wyze does have a really good 30 day return policy, so if you can’t get it to work like you want/expect you can always take advantage of that if needed. That’s what it’s there for, to make sure you’re satisfied one way or the other.