I recently installed the wyze garage door controller. I had an existing camera I connected it to (not the new style with round cable) so the instructions mentioned it could interfere with my garage door opener in my car. I placed the camera the furthest away from the garage controller that the cord would allow (it’s stretched to the max). Now the garage door opener in my car won’t work unless I’m damn near touching my garage door with my car. Is there anyway to cut down on the interference? If not, this thing is getting returned

One suggestion that I have seen is that you might be able to wrap some tin foil around the Wyze V3’s pigtail to get some or all of the range back.

I have not tried this, nor have I seen any “this did not work” or “this did work responses” to the suggestion in other posts.

If you do try this, I, as well as our other @Mavens would be interested in hearing your findings.

I already tried this, it literally did nothing to help. I wrapped the entire cord coming off my existing wyze cam v3 with foil and my door still refuses to open unless I’m standing directly outside the garage. 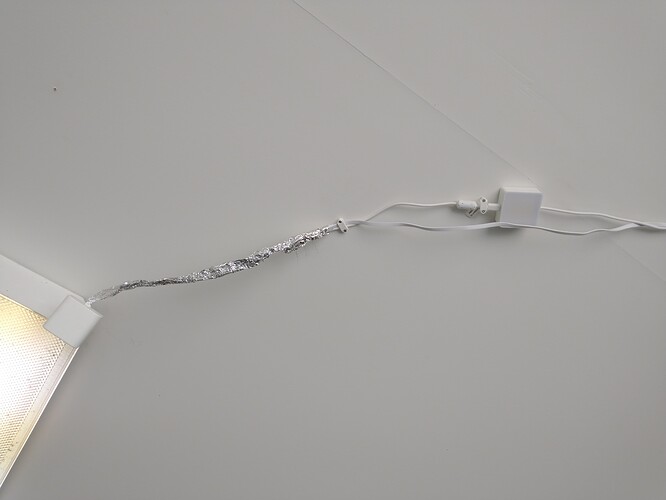 Sorry to hear you’re having interference issues. I also have an unshielded GDC V3, but I wired mine to a remote control and have it pretty far away from the Garage door opener.

Another possible solution I’ve heard others do is to buy a new longer data sync capable cable that would allow you to move it even farther away from the Garage Door Opener.

You can also buy some real cable shielding (ie: off Amazon).

Or, you can always return and replace it with a bundle package that has the V3 with a shielded cable instead.

Thank you very much for the follow up and the visual.

Sorry you are still having the issue. I concur with @carverofchoice suggestion in trying cable shielding off of Amazon, which is fairly inexpensive.

I was reading a bit about using foil for shielding and the suggestions were to make sure it is wrapped tight and even. Could be worth a shot.

I would also be curious (and I know this sounds counter to what @carverofchoice has mentioned in adding more distance) if you got the camera closer to the controller with the tight wrapped shielding. Just something I would try to rule out the issue, even if I weren’t super hopeful. Just process of elimination.

The interference isn’t specifically a problem with the Wyze Garage - it’s with all of their cameras (or at least v3). This morning I was listening to GMRS frequencies and couldn’t hit a repeater that I know I can reach - and definitely hear. I flipped my radio to view the spectrum and their was noise up and down the RF spectrum in the range of 460MHz. I was really confused because it would dissipate the further from my house… and I have all kinds of equipment so I was worried it was something I was doing wrong.

Finally, found that it was emanating from the three Wyze v3 Cameras I have on the end of the house (2 pointing in different directions, and one connected to the Garage). By flipping off the power to these cameras I nearly eliminated the interference blowing up my radio. On top of this, I get the same issue with my built-in garage door opener - I can’t use it unless I’m literally under the damn thing. I’ve even moved the antenna to help.

Also, I’ve noticed that I have a lot of interference over a bunch of spectrum when dealing with my HAM radios… I’m willing to bet if I unplug these cameras they would go away.

This is almost a deal breaker for me… and I’m kind of at a loss of what to do. I’ve bought six cameras and a large number of connected bulbs…I’m feeling like I’ve blown a ton of money on something I may have to get rid of. This is pure [removed - language]. These are supposed to work over wi-fi…they shouldn’t bleed all across the spectrum. If my neighbors complain then I’ll be forced to shut them down.