Your experience makes my nether port pucker a little, like I dodged the seemingly-random update bullet.

At any rate, sympathy, I know it sucks when you’re the one to take the hit.

Well, I tried all different firmware. none really work.
the 111 manage to connect once unpower it is just crap again.

I suspect you have a bad V2.

This device is offline.

Broken again - this time directly after an app crash, upon reentering app and cam group.

Not Sure if My V2 is bad as it is very hard for user to diagnose.

In order for camera to work

let me know if you unpkug yours cam and repower it will restart camera.

After 4 days of countless hours of re-flashing V2.
It is back alive.

I have absolutely no idea what fixed it.
I just kerp trying QR code to re add camera.

most I got time-out, no local network
then bang success.

Wyze Server has been fixed???big unknown

another 48hrs.
boom. the noevents problem is back wothout touchiny any thing.

This is a comment that I wish the WYZE staff would see. It is more generalized rather than specific to one issue.

I have found that a general problem exists when attempting to follow instructions for many things that WYZE provides instructions for. I find the instructions to be woefully INADEQUATE. They generally are written for someone who is already totally conversant with the WYZE equipment or operation of a piece of equipment. I have found it necessary to go on You Tube and hope that someone else has made a video providing the kind of instructions that WYZE should be providing to initialize a new piece of equipment for example. Wyze should not assume that everyone is a computer genius.

@ArthurmB, full agreement with you there. When I first started there was a steep learning curve, and I used to be a Network Manager back in the day! It took me a while to learn the ins and outs, but this forum was my best resource.

Here are some suggestions:

If you want Wyze to read your post, you need to ‘tag’ someone so they get sent a notice: The @ with their handle behind it, like I did for yours above. You can find all the Wyze Team users by clicking the triple stack menu in the upper right, then select users, then change All Users to Wyze Team. The most active Wyze Team users will be on the top. Likewise, if you want an answer from someone with vetted and proven experience… Tag a Maven or two. They can also be found as a user group.

If you have a specific question, you can always post it in the forum and someone will hit you back. You can also direct message (private) any user who has their DM enabled. From their post, click on their Avatar Icon and click Message.

Wyze does have an extensive library of Knowledge Articles on the web with instructions, guides, Frequently Asked Questions, and general explanations for specific issues. You can get to these at https://support.wyze.com/hc/en-us. Don’t start a chat that will pop up, but scroll down to select the product or service you are looking for.

I suspect you have a bad V2.

I actually had a “weak” one that I deployed at my parents’ house last November. Something about the Wi-Fi was just squirrely so I bought a new one (solid performance in same spot) and took the squirrely one home to my place where it is situated much closer to the Wi-Fi. Hasn’t had an issue since, but I’m thinking there is some quality inconsistency with the v2s or maybe a questionable production run.

Generally speaking, I find the cam pan v2 much more resilient recovering from offline errors. Sometimes they display the 90 error or other connectivity complaint and I can actually issue a restart to recover them. Predecessor v1s would often need power cycling and balk at input. Sadly the very first wyze product I deployed (cam pan v1 from February 2019) has had a rash of offline fits recently and replacement is imminent…

This may not be specific to this particular release of the firmware, but I wonder if anyone has noticed that the IR night vision of the V2 is SUBSTANTIALLY dimmer, weaker, whatever, than it was, say a year ago?

I have saved events from the same camera/same scene that are dramatically ‘brighter’ in illumination - two cams where detection used to trigger regularly when people or animals crossed the frame but no more.

I’m thinking along the lines of a change made to the code to process video received when night vision is on - less exposure applied, if that makes any sense - versus a change in the intensity of the IR emitters themselves.

I thought I saw @WyzeGwendolyn respond to someone asking this question within the last month or so but I can’t find it now.

Also, is there a current v2 firmware beta release?

Can you post an example? Most night vision IR light dimming is caused by a bright object on screen, like the IR light reflecting off a tabletop, wall, or other item in front of the camera. The IR lights will automatically dim if the camera thinks they are too bright because of that reflection.

Ah, the lights themselves will actually dim/adjust, eh? Interesting, thanks!

like the IR light reflecting off a tabletop, wall, or other item in front of the camera

It occurs to me you may have seen my ‘dirty rat’ video.

This may not be specific to this particular release of the firmware, but I wonder if anyone has noticed that the IR night vision of the V2 is SUBSTANTIALLY dimmer, weaker, whatever, than it was, say a year ago?

Footage from last night suddenly shows scene bright enough to trigger Person Detection - what it had been doing before. No new street lights and the moon is just a sliver. Could be a function of an aging sensor, maybe, or… hell if I know.

Actually, I think you may be experiencing the same change I experienced. Thinking they made changes cloud side. Has to do with the changes they made to the light sensors. Mine was a V3 not changing out of IRNV. Then… Poof. It works.

I just checked the cam that was giving me these issues. This morning, it automatically switched itself out of IR NV into Color @ 7:08 am which it wasn’t doing previously. The only change made to this cam was that I introduced a nightly power cycle on the smart plug with an Alexa routine. Will continue to monitor.

Being only a shade tree tech user

Seriously? You pretty much rock, Slayboy!

You pretty much rock

That’s about all you can do in your old age. Sit and rock.

Anywho… False alarm on my light sensor. Still not acting right. Updated my post over there.

Not sure if you followed all the reports of the update change reducing the sensor ability to illuminate IRNV and Color night vision. Not sure if it is V3 specific or affects older cams. Saw you posted on one.

One theory is that the changes made to reduce light source washout over exposure reduced overall backlight across the board and darkened the night vision images.

Hello y’all I’ve been having trouble with two of my cam v3. Color night mode won’t work at all, it’s completely dark. I’ve restarted and unplugged and all of that but still no color night mode. Started 4 days ago all of a sudden. Suggestions?

I’m not trying to beat a dead horse here as I know this has been discussed a lot on the forum. However, recently the quality of night videos have deteriorated considerably. Not sure if it is firmware or hardware related, so I need some advise from seasoned users on this forum before I take it with support. Wyze Cam v3 Firmware 4.36.9.139 App iOS 2.32.2 Here is a short video of what’s happening: Notice that there is a huge amount of artifacts, never had that before. The quality wa…

Man, that’s quite specific, and deep, thank you!

I think this applies to you as much as @customer:

You’re pretty good, though. Look what you just did.

I’ll bet you’ve spelunked through every feature, option and setting. Not this frog. Once he’s satisfied he stops.

and the difference between you all and me (as noted at the end) says it all.

I respect you guys.

Another thing that Wyze broke with the firmware update is the detection during the day. I installed three new v3 cameras at my cottage. They worked like a charm, then I upgraded the firmware and all of the sudden one camera would not detect anything. No recordings to the cloud and no notifications. I swapped cameras. At different location the camera notifies me. WiFi signal is strong at that location as the router is about ten feet away. I spent all day playing around, swapping cables, SD cards. Then the sun goes down and the notifications start working. So it turns out that the video now is overexposed to compensate for adding detail in the shadows so the bright areas are washed out, and the AI can not differentiate people walking unless they’re wearing dark clothing. As I had light beige shorts and white tee shirt, Wyze couldn’t make the difference until the area (on the top of the picture) was in a shade. 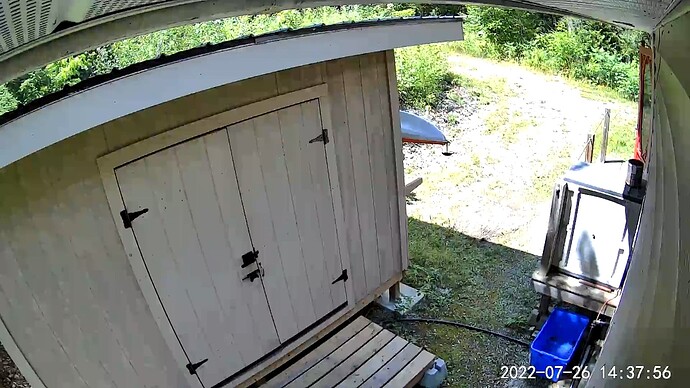