This improves connectivity, reconnection after router reboot, update stability, and security. It also has bug fixes! 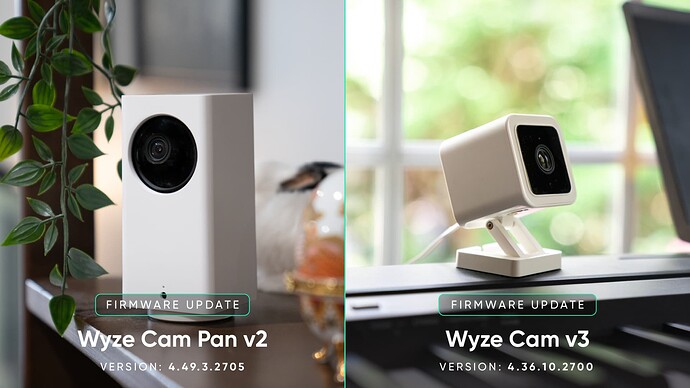 Has the video quality degradation been fixed?

My cameras updated their firmware this morning. Playback of videos from my sd cards now have a loud sound distortion (pure static). Is this related to the firmware upgrades?

Tried contacting support and they instruct me to perform a factory reset! Wouldn’t that just lead to me having to reinstall everything , plus the firmware upgrade, only to arrive at the same issue.

No. A factory reset will not revert the firmware. It only resets and reloads the update you just installed with the cams factory settings. It will require a reinstall\Setup routine but you don’t need to delete the cam from the app. That way your custom settings and preferences should be safe. The only way to revert the firmware is to flash it back with an SD card.

Updated all 9of my V3 cameras to the new version. First thing I did was enable notifications for AI only. Then enabled detection for vehicle, person, pet and package. However, today, a large UPS truck delivered a LOT of packages to the house. Should have been seen by 2 of the cameras. Neither alerted. I have an SD card in all cameras. Both of the cameras recorded motion and the video clearly shows the truck, but did not recognize it as a UPS truck and alerted me.

Both cameras did see our vehicles in the driveway, recorded the motion and created an event. that only recognized motion. Neither considered them to be vehicles. One camera is about 10 feet in the above ground and at its closest, 5 feet from my Ram 2500 truck. The other camera is on the second floor looking through a window at the front of the house and saw the vehicles, but did not recognize them as such. The SW needs more more I in the AI. I’ll be glad to upload the videos and logs

Was recording some SD Playback Video when I noticed this anomaly. Perhaps a FW bug, perhaps an app bug. But, since I couldn’t get it to reproduce on two other FW versions using the same Beta App, I am leaning toward FW Bug. Please test and confirm.

Can confirm this on v3s running .2700 firmware and the latest IOS beta app.

This does not happen with v2 cams.

This does not happen when recording live view, just playback.

That is a possibility.

I had/have a V2 that did/does this especially during nightvision. I just noticed your example was using nightvision. Does this only happen to you at night or does it occur during daytime recording too?

I was tracking all the Reports of V2’s doing this (there were a handful), but this is the first V3 I’ve seen do this. There were theories about why some V2’s did it, but you throwing a V3 into the mix makes it interesting.

I just checked some daytime footage and Color Vision isn’t doing it. Both timers are synced.

I have some more IRNV footage to grab. I am using the .2700 for baseline against older FW versions. Will keep an eye on the .2700 footage.

Ah, well, then there goes my theory as to why.

I posted this in another thread, but just saw this one:

I have two cameras. Everything was working beautifully for months. Then updated to 4.36.10.2700 and now there’s a solid blue light when the cameras are idle, then solid red light when motion is detected. I do not use a SIM card - I have cam plus. The cameras do seem to detect motion and upload the motion video to the cloud, but I never get notified anymore and, again, red light on the camera when motion is detected, then blue light at all other times. Both cameras experiencing the same issue since the update. Tried rebooting, resetting etc.

Go in the Advanced Settings and turn the Camera Status Light OFF. Also check your Detection Settings and Notifications. Firmware update probably reset your settings.

I checked detections and notification settings. They were not changed by the update. Neither was the camera light setting. I had it on before and it remained on after.

But I just tried switching off the camera light and the light stayed off always - even when motion is detected. That’s not how the camera operated (and I had it set) before the update when everything was working perfectly. Before, the camera light switch was on and the light was off when there was no motion, and turned blue with motion. The only time I ever saw a red light was when there was a legit problem like no wifi. Now, with the switch on, the light is blue with no motion and red with motion. It’s never off.

However the camera light switch is positioned, I’m not getting notified anymore.