Wyze Cam Pan v3 - Does not return back to home position

I just got my Wyze Cam Pan v3. Excited I replaced my Cam v3 looking outside from second floor on to my driveway with Cam Pan v3. However my excitement didn’t last very long when I encountered these two issues which are really disappointing to say the least.

Am I doing something wrong, or the cam’s motors are so imprecise that it can’t figure out its return position. That’s a deal breaker. Hope this is just a firmware issue.

This pretty much makes the camera unusable for me. At least Cam v3 was looking out where I wanted it to look out, that is my driveway not the street.

Here is the video that shows the problem: 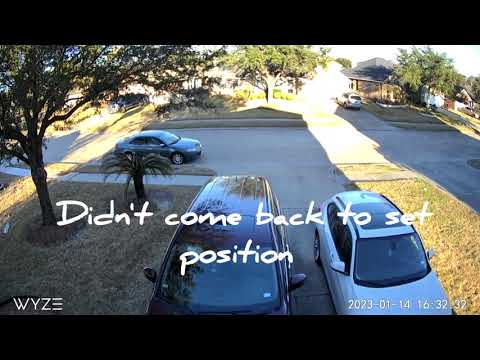 Am I doing something wrong

No. You aren’t doing anything wrong. I am confirming your findings.

I setup 4 of my PanV3 yesterday but only installed one to fiddle with it and get my bearings before installing the other three today.

I experienced the exact same issue. Detection Zone on, set, and saved - which locks in the “Home” position to the DZ view when saved. DZ blocking out trees and shrubs that move with wind.

The cam was chasing that bush like it was trying to burn up the motors.

After 10 seconds of no movement, it returned to home screen…but several pixels off. The DZ no longer covered the block out area I needed blocked out.

This also happens with the Scan feature off. If you live stream the cam and manipulate the Pan\Tilt in the app then wait 10s, it will return to the Home position that you just set in the DZ… But a little off the mark such that when you open the DZ, it is no longer blocking the same area.

I didn’t get time yesterday or today to reproduce it on my street facing cams, hope to build the snapshots to show this tomorrow and post it.

Just wanted you to know you weren’t going crazy.

Thank you. You would think that this would be a basic feature of a “pan” camera and should have been tested well. This basically ruins the “pan” part of the camera. Might as well use Cam v3 instead. Oh wait! I just replaced Cam v3 with this one … oh well!

I replaced 4 V3 with these.

This isn’t operating correctly and I suspect it is a glitch in the OTA updated FW rather than the production FW that was used when the cam was Alpha tested.

Since the cam had previously been yet to be released, there is no Beta pool to test the Firmware as a normal update would have been tested. Now that the hardcore Beta Testers have units hung, the next release can be vetted in the normal manner.

Reporting the glitch, documenting the behavior well, and dropping logs is the first step in getting it fixed. I am going to do that tomorrow in the daylight. It is too hard to see the DZ in IRNV and my cams are chasing headlight scatter.

If you get the chance, drop an app log and a cam log and post both numbers back here so that the devs can pull the logs and look at them when they start working on this. I am going to drop my logs tomorrow when I put the cams under the microscope.

An update to document this glitch:

BUG: Cam does not return to the exact original home position but returns to a spot several pixels off each time thereby throwing the DZ off by the same margin: 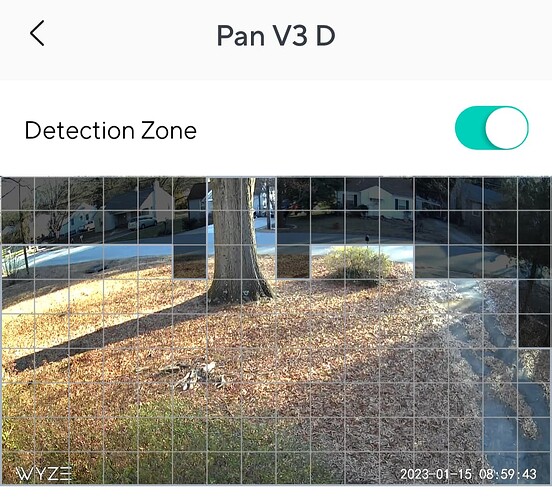 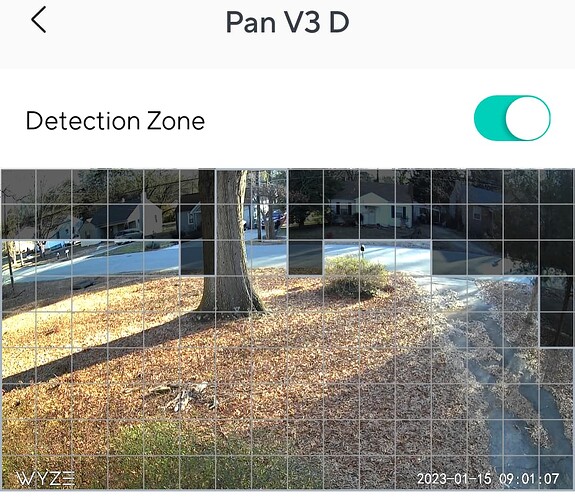 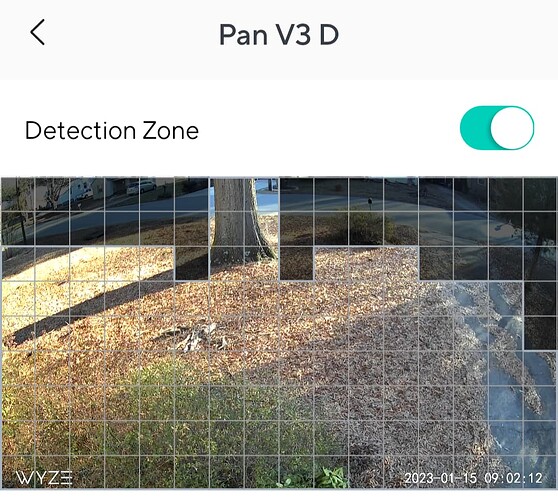 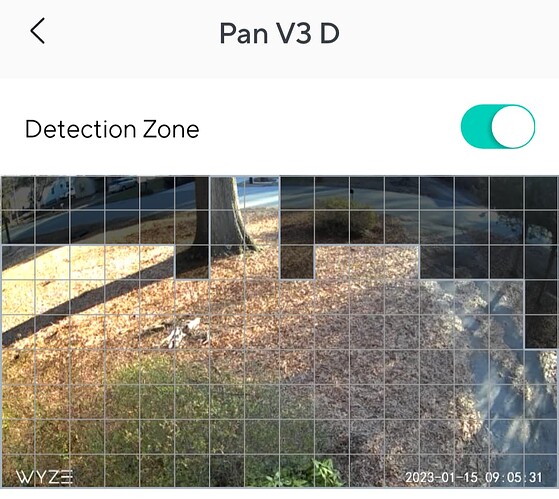 Additionally, unsure if this is another bug or just a feature omission that no one ever thought to add:

While editing an active DZ, manipulation of the PT via the thumbpad does not produce a “Save” prompt nor does it save the DZ FOV as the new Home Position. The position of the FOV in the DZ screen should lock the Home position to that FOV position and save the edit. Any modifications to the cam PT from within the DZ should automatically trigger a new save prompt. The DZ is what locks in the Home position.

One more thing I noticed is that if I define a waypoint (just one at home position, or two right next to each other around where I wanted the home position to be), the cam does return back to the waypoint(s) successfully. So, for now the workaround is to create a waypoint at the home position, and that should solve the problem. At least it held its position overnight. I will continue to monitor during the day, how that goes.

Update:
Actually it seems having one waypoint still has the same kind of issue. Having two waypoints side-by-side close together seems to work much better.

Thx for the update!

I did set a singular waypoint, however it made no difference for me. I believe this is because the waypoints are only engaging with the cam position when the Pan Scan feature is on. Turning this on automatically toggles the Detection Zone off. It is more important for me to have an active DZ than having it scan. Even if I did set it to scan, it can’t do that without covering some high activity areas that I need blocked if I am to maintain my notification sanity.

However, I do see that the Detection Zone remains on even with the waypoints set and Pan Scan on, although you are right it doesn’t make much sense. So, this could be annother bug. As my original post shows, the DZ is also an issue by itself. It doesn’t look like it honors it very well, because with my cam in home position, I have my street removed from detection zone, yet it wants to chase every single car passing by. This happened even before the waypoints were setup. This makes things worse for coming back to home position.

However, I do see that the Detection Zone remains on even with the waypoints set and Pan Scan on,

Double check that. When I first turned on Pan Scan, I even got a pop-up telling me it was turning off the detection zone. Every time I enable the Pan Scan w\ the DZ on, it automatically turns it off. If I turn it back on, it turns off the Pan Scan.

With the DZ on and PS off, my DZ is hit or miss. I played around with several configurations. It seems that it will only work with a full two block buffer which is about as fine tuned as a wrecking ball.

I can tell when it isn’t at home though and is off daydreaming looking at bumblebees and shadows because the notifications for cars starts to flood in because the DZ isn’t in the right place. I have the road blocked out but I want notifications of vehicles in the driveway. Getting it to return exactly to the same home spot is the problem for me right now.

I have turned off the Vehicle notifications for now until they fix this. Both are definitely broke.

I do see that the Detection Zone remains on even with the waypoints set and Pan Scan on,

Had to post back on yet another issue related to this based on your post above. You are correct, they can both be on. But what a hassle.

I had Pan Scan Off with the DZ on. I set up 4 waypoints and saved them. It automatically enabled Pan Scan and started scanning the 4 waypoints. I checked the DZ and it was on.

I went back and turned off the scan and then back on. This is what I got when scan was turned back on:

So you can have them both on… But turning on scan with the DZ on will turn it off and you have to go turn it back on… But setting waypoints automatically turns on scan but doesn’t turn off the DZ.

Not sure what king of crazy logic produced that. DZ is useless outside of the home position anyway.

Hahaha, this is exactly what I have been seeing. I have the street removed from the detection zone, but it really doesn’t care. It chases every car passing by. It looks like Wyze accidentally left some flag set to false for Detection Zone, something like isEnabledDetectionZone = false;

And while I was posting this reply I was about to show you some pictures to prove I have it on, and you posted the above reply saying you verified it does. So, yeah, one more issue, probably ties back to the fact that the firmware is completely ignoring DZ, so it doesn’t matter if it is enabled or disabled with or without waypoints.

I also see this message after I disabled and enabled Pan Scan. I went to see DZ and it was off. I turned it on, and it is back to the same situation. DZ on with waypoints. But then again, it doesn’t care about DZ, so it doesn’t matter to it if DZ is on or off, with or without waypoints.

About as clean as crisp and clean as a soup sandwich.

If I have to spend this much time on the other 3 cams, the V3’s are going back up.

Right now I have all 4 waypoints focused on the home position with motion tracking on. Hopefully one of them will get right so that the DZ works some of the time. I have to block out an extra block row just to get it to think about ignoring the road.

I, too, am finding the CamPan V3 is not returning to the saved detection zone. I have tracking ON, and scanning off. I’m nowhere near as familiar with all the settings and code used to make this happen as many of you. I’m setting a DZ, clicking on the image, then choosing save but it doesn’t stick.
ETA: I have no waypoints set either.

@PHA That’s all you should have to do. it is a bug in the firmware or the hardware.

Wyze needs to get this fixed as soon as possible since it pretty much kills “panning” part of the camera, which is probably the only advantage of this camera over Cam v3.

I’m having the same problem. The camera does not reliably return to the defined waypoint locations.

Same problem here! Camera will not reliably return to starting position regardless what I try!

Awe shucks…says someone on the product launch team.

1 day in to my Pan v3. Similar problem. Waypoints are off a bunch after motion follow. Sometimes does a random 180 pan and then the pan motor locks up. Wont pan at all. Tilt still works. Motor reset does nothing. If I unplug, rotate pan base back and forth and then plug back in works for about 2 hrs then does the 180 thing and locks. Getting warranty replacement but none in stock now.