The app is using more cell data than any other app. It is costing me over 10 dollars a month just to have the app running in the background. I can stay in my personal wifi all day and somehow wyze app seems to eat cell data. This is a pretty big WTF wyze???

Looking back several months on my Android 9 data usage, I find the Wyze Beta app uses only a trace amount of carrier data, under 800-kb. One month when Xfinity broadband service was wrecked in my area, completely out for 5 days, and iffy for several more days, the Wyze app used 65 megabytes of data.

You might want to post more information such as the brand and model of your phone and the operating system.

Why not just make a WiFi only toggle?

Your phone should be doing that for you.
Are you using Android or iOS?

Your phone should be doing that for you

What you are describing is very rare. Most phones steadfastly refuse to use more than one Internet connection at a time. You’re sure the app isn’t running while you’re out of WiFi range?

Are you using any filters on your WiFi or phone that could be preventing the app from talking to AWS? A PiHole, Diversion, Skynet, AdGuard etc could do it, and that might convince the app that it isn’t online.

Like people have said, a lot depends upon your phone OS, version and settings. If running Android, you can root and use something like AFwall to specifically deny individual apps access to cellular data. Lots of options, but we have too little info to be specific

The thing is that your app is the only thing using tons of data. By far it triples the amount of data used. Trumping chrome and youtube.

I do not view video playback unless on a WiFi connection.

Many other apps have a setting to only use wifi. Ex netflix, photo backups.

No reason a media app like wyze shouldn’t have this setting.

Good start, now do you run adblockers on your phone or LAN, or do you use Private DNS with a DNS like AdGuard?

Did it give you a Not Found / 404, or did it flat out fail to connect to anything?

BTW I am not Wyze, and I think their app is a series of privacy violations waiting to happen. But that isn’t what we are talking about here.

On IOS you can turn off cell data usage by the app. Settings/Cellular/WyzeApp
On Android I think it Settings/AllApps/Wyze/Data Usage/Background Data
Means that you have to turn it back on again when you leave a WiFi connection to access your cams.
There is also a thread on the forum about this if you run a search.

The thing is that your app

You’re talking with other WYZE users like yourself not WYZE employees.

You can open the WyzeBeta App Info (properties) and turn off Allow background data usage. You can do this with any Android app.

It seems most of us are missing the actual claim here, which is that the user is staying on WiFi, viewing cameras ONLY on WiFi, and claiming that the Wyze app is somehow using lots of mobile data. Limiting the app to communicate on WiFi only isn’t even the point. Unless I misunderstand, he or she is saying that the Wyze app is choosing to use 3G even as other apps are simultaneously using WiFi. I have doubts.

Yeah, it CAN happen depending upon lots of things OP hasn’t clarified yet, but it is admittedly unlikely. Note the “Mobile data always active” option in Developer settings.

Thanks. But doesn’t the “for fast network switching” imply that only ONE route is in effect at any given time? The mobile path is ready but no traffic flows until the WiFi drops…

Yes, but I don’t know how it would react if there were something on his LAN blocking access to the AWS server the app wants to talk to.

That is why I was asking about adblockers and the like. If, for example, he has a PiHole set up, and if only certain IPs on his LAN use the PiHole for adblocking, and if his phone IS one of them, but the cameras themselves bypass the adblocking, and if the IP the Wyze app happens to have erroneously been flagged as spam for one reason or another, then the cameras may work fine, but the app might not be able to connect on WiFi and maybe his phone could try switching to cellular.

Please do understand that I agree 100% that all this is almost comically unlikely, but the diverse nature of both the Android ecosystem and home networks makes it pretty tough to say anything for certain without OP providing log files, or at least a much more verbose explanation of his environment.

Bottom line: shrug, could be the position of Saturn this month

That’s why I showed how to stop the app from using cell data in the background. If he stops receiving communication from the cameras then he knows something ain’t right.

We don’t know how much data it’s really using yet.

Well, here is mine for the OP to compare. I am mostly on WiFi at home these days.

By comparison my browser has used 235 MB and Google Maps 45 MB over the same period. 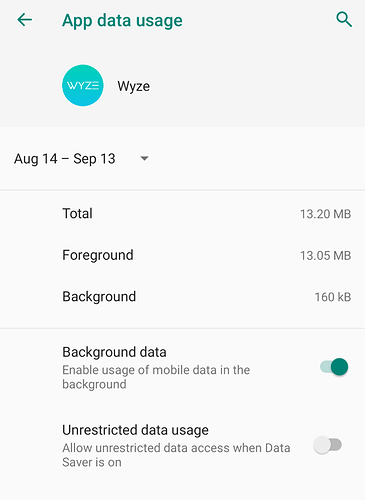 Also no pi hole or adblockers.

I do have dev mode enabled. But do not have the data only on.

Data Saver is on.

This is mine for all of August. About 10% background, 90% foreground. 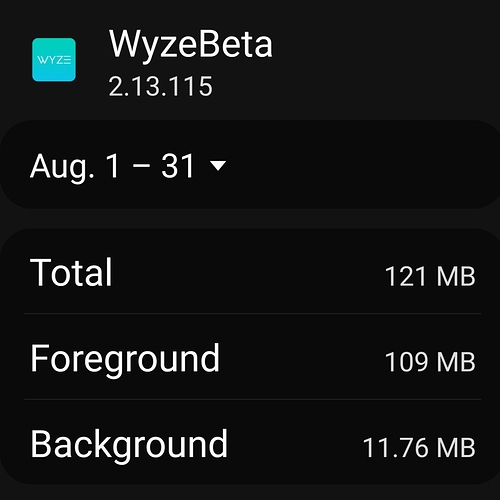 It gets pretty small with just the band and scale. 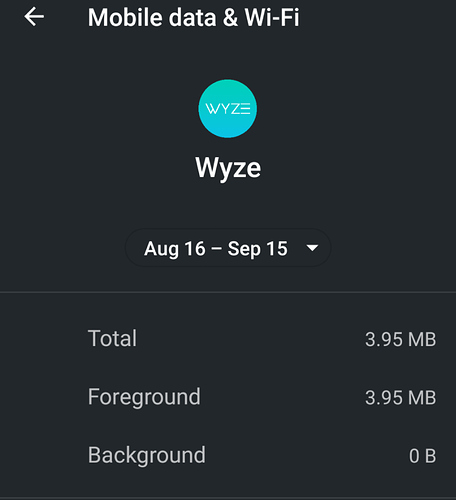