Besides the color, are there any differences at all? Is it the exact same hardware, etc? 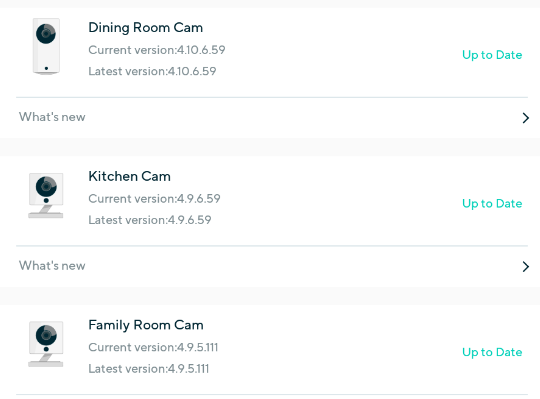 (Posted in Beta category, because I am enrolled in “Beta” and it could be Beta related somehow?)
Android WyzeBeta 2.11.40 (on Samsung Note 8; and also on Bluestacks emulator for using Wyze on my Windows Laptop)

The firmware 4.9.5.111 is a Beta version released I believe in March. The other cameras are running production versions of their firmware. Why is a good question.

Thanks! Yes, Why is a good next question…if I am on Beta and that is the latest beta version, then why aren’t all of them updating to the newest beta version or showing that I can update to it? If that beta version was revoked, then why did that white cam not revert back to the other version? So weird they wouldn’t all do the same thing.

I’ve seen this happen. Try going to the cam itself and device info and check the firmware there.

Also, if the odd cam has RTSP active, and you are running beta, it won’t update correctly–as I recall. There was a bug recently causing this issue.

the 6.69 firmware has lots of issue when release for beta and has been since recalled.