When is next Wyze V3 Cam Firmware Releasing?

If it survives Beta testing then it will be released.

Thanks much! How would I find that information?

Watch this link for Wyze firmware updates (scroll down to v3). When firmware moves out of beta testing, it should be listed here.

You could join the Beta and get it yourself.

Thank you for your interest in our Beta Program! We greatly appreciate you joining our efforts to improve our products. As one of our beta testers, you will see new products, features, and bug fixe...

Here is the Beta Release Thread where Beta testers are posting feedback for 4.36.10.3346:

All new Production Firmware Releases are posted to the Wyze News #news Category. You can set your status for the category to Watching First Post and be notified by email whenever a new firmware version is released.

Thank you! I have 3 cameras still on 4.36.9.139. Those won’t update to the new version. My other cameras have. Do I have to totally reset these?

Today is January 8, 2023. The message dated November 2, 2022 on the firmware updates page said they’re releasing it over “two weeks.” That time has elapsed and much more.

@WyzeJasonJ @WyzeGwendolyn please sort this out, the firmware updates page is a MESS and clearly both out-of-date and incorrect.

When can I expect to get the firmware update for the v3??

Today is January 8, 2023. The message dated November 2, 2022 on the firmware updates page said they’re releasing it over “two weeks.” That time has elapsed and much more.

The firmware updates page is correct and in reverse chronological order. The Cam v3 firmware you are referencing was halted due to issues: 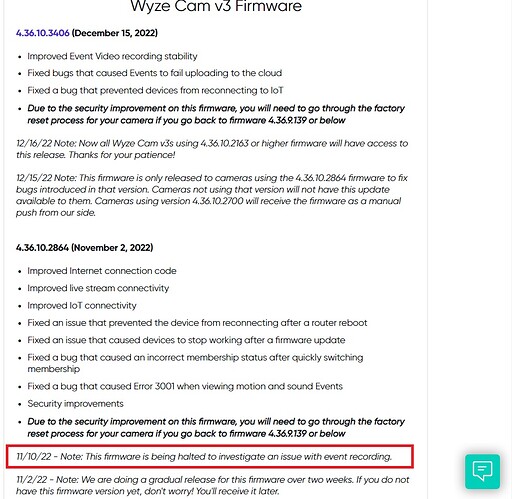 The next Cam v3 firmware is undergoing beta testing. It will be pushed out to the public when known issues are resolved.

When can I expect to get the firmware update for the v3??