What if anything can be done about the doorbell not being reliable?

My doorbell NEVER records people. It will record trees and cars and everything else but never a person. Even when they are standing right in front of it waving. Several times this week alone it has made an event for a car passing by, then two minutes later another event of a another car passing by, But during that 2 minute gap there was a package delivered and someone actually rang the bell. Heard the chime. But no event recording and no notification. All of the other cameras record the motion when its a person, that’s how I know they are being missed by the doorbell. The doorbell never misses a car driving by or a flake of snow blowing in front of it but flat out stays asleep when a man taps on it and rings it and waves at it? And it keeps happening. it’s not just one incident there has been several in the last week since I installed it. I have every box enabled possible as far as motion detection, smart detection, sensitivity is cranked to 100. I just don’t know what else to do. I didn’t buy it to record every car and squirrel that goes by and ignore the MEN on my porch. What more can be done?

…What more can be done?

Switch to another brand.

I’m guessing you don’t have a Cam Plus license on the doorbell?

It sounds to me like most of these issues are likely due to the “5 minute cooldown” between events.

So, if a car passes by and triggers an event, that means it won’t record another event for 5 minutes. So if a person comes by or drops off a package 3-4 minutes after that car passed by, it won’t record the event, nor notify you.

So, what can be done (besides having a cam plus license to get rid of the cooldown period)?

Those are the main solutions to try out first.
If you post a screenshot of the Doorbell view, maybe some people can give you suggestions of what to block out or have included in your detection zone based on our experience.

I do in fact have cam plus on the doorbell. It will get back to back cars, record lengths of 2-3 minutes of trees blowing across the street etc. But never a person. Since posting this I have myself gone out and walked back and forth on my porch (looking like an idiot I’m sure) I have jumped around, waved at it, rang the chime (heard the chime from outside) and just nothing from the cam. No event recording, doesn’t even motion track. Says last event was the tree five minutes before I went out. I go back in and sit down and boom, 3 alerts in a row about a car going by, a school bus going by, and a branch wiggled a little from the wind, proving the motion tracking is at least functional. But me jumping around in front of it and ringing the thing…nada. I have the same doorbell installed on my back door for about two years now and it seems to work reliably. Both cams have the same cam plus subscription, The same wifi signal strength the same 24v at the cam, the same firmware (.314) and settings. One will catch and alert me to every person, the other will only see cars and trees? I am out of solutions, I got nothing left at this point. Drop back 10 and punt.
EDIT: fwiw here is a screenshot of the angle. 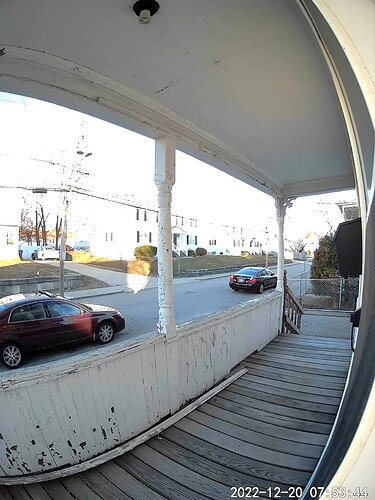 Dang, I am sorry you’re struggling with this, I would also be pretty frustrated. I don’t see anything about your angle that would be problematic.

BTW, is this the original smaller doorbell, or is the bigger battery capable Pro doorbell?
I ask, because if it is the Pro doorbell, it would make me think the issue is related to the way PIR sensors work. I guess by your screenshot view, I think you have non-Pro Doorbell, so my hypothesis is unlikely anyway.

Has your doorbell ALWAYS had this problem or did it used to record humans ok and just start having the problem recently?

Have you contacted support about the problems yet?