What happens when you get an alert from an outbuilding at night - can you hear it on your phone?

Waiting for my first Wyze camera in the post. Question if I get a burglar alert from my outhouse on my Iphone 6 whilst I am asleep how do I hear it? Is there an alarm function so my phone wakes me and I can hear it?

Nothing in the app itself beyond the alert sound. If that’s not loud enough you could have IFTTT trigger a Siren I imagine. Keep in mind that technically these are not security cameras so they don’t have that capability built in.

Can your phone normally wake you if there is a call or text/notification? A notification would be the same unless your phone has the ability to manually control app notification sounds independent from the os.

Welcome to the forums! Another thing to think about is do you have good wifi to connect to the camera at the outhouse? Camera needs wifi with internet to work.

The alert sound Wyze uses on the iPhone is the normal alert sound that dozens of news services (etc) also use. You can’t substitute it. So it’s just a quick beep, like a news alert coming in. Thus it is unlikely it will wake you, or even sound significant to you. It also won’t override the phone’s scheduled “Do Not Disturb” hours.

You could try what @rbruceporter suggested, and set up something like a siren thru IFTTT, but know many things can set the camera off. A cloud passing in front of the Sun, for example. And if all IFTTT does is turn on the siren and doesn’t turn it off, then consider how that will be received by your neighbors if you are away.

@rbruceporter is right, these aren’t marketed as security cameras by Wyze. The above factors are just a short list of reasons why.

@Omgitstony is right too – do you have a solid WiFi connection at the outbuilding?

How to get Individual camera notifications ( workaround) Tips & Tricks

so, most of us here want to be able to get individual notifications from different cameras. for instance if you have someone at the front door, you want to know its the camera you have on your front door, and not the one inside your garage sending the notification. I have come up with a workaround that will work until Wyze rolls something more solid out. DISCLAMER, I use android and the Wyze beta app, I don’t know if the app you need is available on IOS but if it is, it should functions simila…

but I don’t think it’s available on iOs.

you are correct, there is no corresponding version in IOS.

Well if it’s not a security cam what is it, a banana? Personally I don’t accept this. In my particular case my ouithouse is away from the house and the camera will be mounted indoors so no worries about passing clouds, or herds of sheep. I must say that I am dissapointed it cant do its primary function, alert me to intruders, and am considering sending it back if I can’t find a workaround. They could supply some form of hardware alarm. I think this is a serious issue with the camera set up. One can’ stay awake all night waiting for a notification.

I have cancelled this order because this camera - though it has many excellent features, it cannot do a basic function that many users will expect - wake you at night if there is an intruder. I think Wyzcam need to prioritise a solution to this ASAP.

People seem to get really caught up in the terminology. I don’t think it helps anyone honestly. It’s a camera. Use it for whatever purpose you want. There’s no separate alarm that it connects to, and it’s never been advertised that it does. It CAN send notifications to your phone. If you consider that a security feature – Great! It’s a security camera.

“Use it for any purpose you want” except as a security camera.

Yes, if it doesn’t fit your “security” needs, it’s not a security camera. (Nor is it advertised to be one)

it cannot do a basic function that many users will expect - wake you at night if there is an intruder.

To be fair, I don’t think there are a whole lot of cameras that DO do that, if what you’re talking about is setting off a siren when they detect movement. Maybe there are some. I’m not really sure. But they’d probably be sold as part of a much more expensive security system. I know that Nest cameras, for example, don’t work that way, even though they can be part of Nest Secure, which is Nest’s security system. The cameras can show you what’s going on, but it’s the sensors that trip alarms, not the cameras.

For that matter, I’m not sure if I’d WANT a camera to do that. If it’s using pixel-based motion detection, it’s too easy to get a false positive from anything. Outdoors, just about anything could set it off. Even indoors, a flash of lightning or something could set it off, unless it’s in a dungeon. Motion detection sensors wouldn’t be suitable for that either, if you’re talking about outdoors or a non-climate controlled environment. I really wouldn’t want a loud siren-type alarm to be tied to anything other than a contact sensor or laser tripwire or something definite like that.

Wyze has sensors as part of its ecosystem, but I think people are using them for home automation purposes moreso than for security purposes. (Though it can certainly give some sense of security to be able to see that everything is closed as it should be, etc.)

There IS a workaround, I suppose. If you can find a “dumb” siren that just blares an alarm whenever it’s connected to power, you could connect that to a Wyze plug and set up your rules in the app to turn on the plug whenever the cameras detects motion. You’d just need to buy a Wyze plug and a dumb siren.

if your a light sleeper, a notification could wake you up… and by definition a siren is nothing more than a notification of a sort. versatility in articulation…gotta love it.

Please provide a link to ANY camera that does what you claim is a basic function? I am sure there are some, but not many, and not at this price point. Google/Nest cameras don’t. Ring cameras don’t, although their doorbell cameras do connect to a chime that can be pretty loud. Perhaps their stick up cameras or powered cameras do as well?

I recommend a guard raccoon. 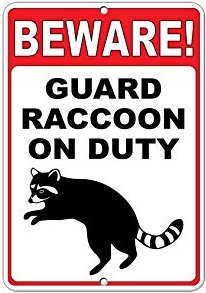 Waiting for my first Wyze camera in the post. Question if I get a burglar alert from my outhouse on my Iphone 6 whilst I am asleep how do I hear it?

Seems like if that was an IMPORTANT REQUIRED feature one would look for it before buying.

If there were a burglar already or almost in the house, I don’t think a da da ding da ding alert notification on the phone would be much benefit at this point.

I would want a real loud alarm system that is going to wake up the entire neighborhood and scare the devil out of the burglar.

This is exactly why I want lasers! But they keep saying something about legality and stuff. Hey I live in the South where “he needed killin” is a valid legal defense!

I think you may be missing a point

Question if I get a burglar alert from my outhouse

Now if I had an outhouse I would sure want to know if someone was in there. 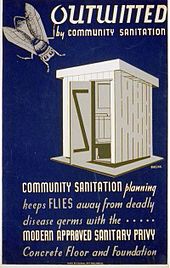 An outhouse is a small structure, separate from a main building, which covers a toilet. This is typically either a pit latrine or a bucket toilet, but other forms of dry (non-flushing) toilets may be encountered. The term may also be used to denote the toilet itself, not just the structure. Outhouses were in use in cities of developed countries (e.g. Australia) well into the second half of the twentieth century. They are still common in rural areas and also in cities of developing countries. Out...

You don’t know what type of stuff they may leave!

I would want a real loud alarm system that is going to wake up the entire neighborhood and scare the devil out of the burglar.

Here’s a gent with some home security background improvising a system with Wyze cams:

Can Wyze Cam capture its own theft? Cameras

Many years ago, I installed alarm systems for a local company. I was told that the one major deterrent to a potential thief is a horn – a VERY LOUD horn. I’ve since gone “back to the future” and am installing a VERY LOUD horn system triggered by movement at the appropriate places. Too bad there seems to be no reliable interface between the WyzeCam and a VERY LOUD horn that minimizes false alarms, and provides very solid performance. The Swann Driveway Alert is the closest I’ve found, yet. S…

Can Wyze Cam capture its own theft? Cameras

Update to my Previous Post; SETUP: — Wyzecam mounted Inside looking Out, through a Window. — Night Vision OFF (IR LED’s off). — 300 Lumen, Motion Detecting, Dusk to Dawn, Battery Powered LED “Puck” Light like the Over Lite (Amazon) mounted Outside on the Window, Inline with the Camera’s View. BAD: — At close range, the Over Lite is WAY TOO BRIGHT. I had to cover 95% of the LED’s with Electrical Tape to prevent “Washout”. — The Motion Sensor of the Over Lite is WAY TOO SENSITIVE. I had to …

This was posted before Wyze added sensors, lightbulbs and plugs to their lineup, and there are certainly other good examples on the boards, but this is the one I remember.