Would be nice if the Push Notifications could be modified in future updates to allow control by camera and by device instead of as a “global” account setting. For some cameras, I don’t need/want to be notified (ie: every time the cat walks through the living room). But on other cameras, like my front door, I want to be notified every time there’s motion detected. It would also be good if the notifications could be turned on/off per device/app. Again, I want to know about motion in the garage, my wife and kids don’t want the notifications. As it is right now, I have to turn the push notifications completely off otherwise every time the cat walks through the room, everyone in the entire household is getting a notification sent to their phone. And now that I’ve turned it off, there won’t be any notifications if the smoke and/or CO2 detectors sense something.

So basically, the push notifications are kind of worthless as they are now, especially if you have pets, unless everyone in the household wants to be notified of every motion from every camera. Really needs to be set up so that the setting can be turned on/off per camera, per device and per sensor (motion, smoke detector and CO2 detector).

Notifications and motion detection can be turned on/off per camera, in camera settings= alert settings .

About the only work-around to this problem I’ve come up with is to set the schedule of the camera(s) that I do NOT want push notifications to be just 1 minute long during the day. In other words, during that one minute, that particular camera can send motion notifications to my phone, but the rest of the time it should not send notifications. Still doesn’t really solve the problem and doesn’t solve the problem that maybe not every person in the household wants to receive notifications at all. I have yet to actually test this work-around scenario but don’t see why it wouldn’t work.

Ya, if you turn off motion detection you won’t get anything , then you would have to use contentious on the sd card.

On alerts , motion detection on, I do that , I set all day ,off and set the schedule for 10 min , start 8:00 to, stop 8:10 and I don’t get any alerts but will get recordings if I set SD to record events only, this way I get no recordings on the cloud, and again I get no alerts

WyzeCam needs individual camera notifications. I have four of them; two of which are facing outside (through a window). If I enable notifications, I’ll be pinged every time a car passes by my house. I only want to be notified when there’s activity at my front porch, or in my home when I know it’s empty.

This topic has been moved to the #roadmap category so it can be voted on. Click VOTE at the top of the page.

Feature Request - Push Notifications per camera instead of global.

If push notifications are turned on (currently a global setting), they come in so frequently that they are quickly ignored or push is eventually turned off. If we could individually chose which cameras we receive push notifications for, many of us with multiple cameras could greatly cut down on nuisance notifications, making them actually useful.

Thanks for the consideration!

Hello. iOS. I want them to make “alert” recordings, so can’t turn that off. Just don’t want push “notifications” about the recordings for some cameras. That setting in “notifications” is global, all or nothing.

What I’d rather see is a “notifications” toggle in each cameras settings.

I didn’t even realize that “Push Notifications” and “Alerts” were distinct things until recently.

I think that disabling Push notifications is like setting “do no disturb” and turning off Alerts is like “blocking a phone number” in a mobile phone analogy.

I haven’t shared phones, or used two phones with the same Wyze account, so I don’t know what would happen if you disabled push notifications on one phone and not the other. My hypothesis, is that each phone could turn off notifications without affecting the other.

Even if push notifications are per phone, it would be nice if you would have groups of phones that were allowed to notify, similar to the way that most phones have a mode that allow specific phone numbers to ring your phone, while others go to voice mail, or are blocked.

And as others have requested, it would be nice (blue sky mode) if it were possible to assign unique sound notification files for cameras or groups (if they were implemented).

Right now these devices do a lot for the money. And Wyze is working on getting the most important things fixed.

The terminology does leave a little to be desired. In each cameras settings page, there are “alert settings”. These control what events (motion, sound, alarm) will be recorded and sent to the cloud. The “Notifications” tab on the app contains these “alert” recordings. In the settings of the “Notifications” page, you can turn “Push Notifications” on or off for all “alerts” regardless of camera, it’s global.

The app, or their network decides what to send as a “Push notification” so it doesn’t have to be global. To me it would more appropriately be on the settings page for each camera. Chose what “alert settings” you want the camera to record/send to the cloud, AND chose if you want push notifications about the events from this camera.

Agree that you should be able to control push on camera by camera basis.

Should your push notification settings affect other App instances that are sharing the camera? I would argue “No”.

Without setting up another device to share my cameras with, I can’t test the behavior. My guess is that most camera settings would appear identical from any device with access to the camera (because I think the those settings are being sent down to the camera itself). Similar to an Amazon Echo’s wake word which is sent down to the Echo, the Alert settings (I think) are sent to the camera, and it does the “motion, and sound detection” locally and decides whether to send an alert based on schedule, alert settings, and time of last alert (alert rate limiting).

This can get complicated (feature creep) very fast. Because, next someone would want push notification schedules per camera, with the ability to have a different schedule for every day of the week (because my Home Thermostat can do it).

In the short term, your best option is to record to an SD card (on event, not continuous) in the areas that have lots of movement, and “not critical” with alerts turned off as suggested by oaktree. Even on the cameras that are important, having an SD card will give you the best of both worlds. You will get 12 second alert videos (at the time of triggering event), notifications, and recording to the local SD for as long as there is movement. And if you record on event, the card should not fill up for a long time. And you can view what is recorded remotely (not extremely convenient viewing, make use of the reverse pinch to expand the timeline).

BuckEye, I get it. But I think you’re over thinking it a bit. Yes the camera settings for when to record and send to the cloud are synced to the actual camera. The decision to “push notify” your phone isn’t and shouldn’t be made by the camera. That’s something that should be/is being done by the backend system or the app?

In talking to friends that have some app development experience with iOS, they say that push notifications per camera/vs global in this type of app should be a simple change. Idk though, that’s out of my lane.

I will say that for multiple camera security applications, the way push notifications are currently implemented, for anyone who has at least 1 camera monitoring a general area that sees motion regularly, it’s a nonstarter.

The suggestion to record to an sd card (on event not continuous) and turn off “alerts” won’t work. If you turn off motion/sound “alerts” on the “busy” camera, it won’t record anything, unless you you set continuous recording to sd card. But then, it won’t put anything in the cloud.

Fact is, if you have a “busy” camera overseeing a general area, along with cameras that monitor more critical areas, you can either have 20-288 push notifications (some people will get 1 every 5 minutes) per 24hrs, or zero…

I imagine many people are in this situation. I have a camera or two that see a lot of motion, but are more general and not critical. But, sd card or not, I would still like events sent to the cloud (camera theft, card or camera malfunction). I have other cameras that monitor more critical areas that I want immediate push notifications for activity.

This is a fairly typical modern security camera scenario. If they want to be a player in that segment it will need to be addressed.

Guilty as charged. I do tend to overthink and get into more details than most want. Sorry.

I just tried turning off alerts (all, motion, sound, …) on my Garage cam, but still have Record on Event to an SD card. After turning off arlerts, I went into the garage and walked around the car several times. It recorded to the SD card. Don’t take my word for it. If you have an SD card and a camera, it is easy to test.

Edit: Because I didn’t upload as images, you will need to click on the photos. There are three screenshots from Android phone. This is Android App 1.3.113 (Beta) 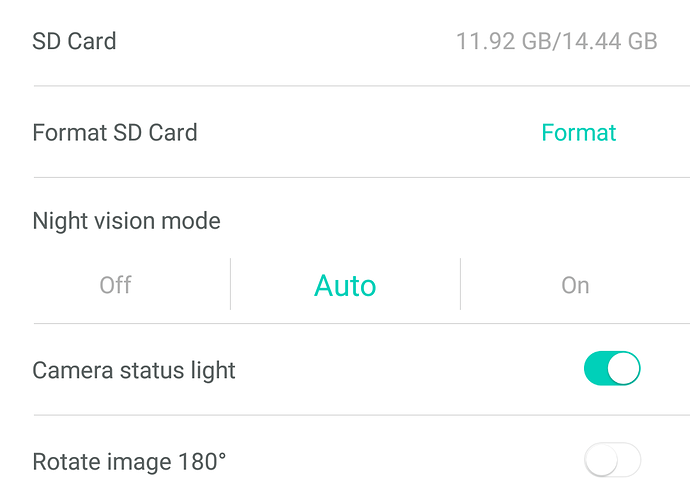 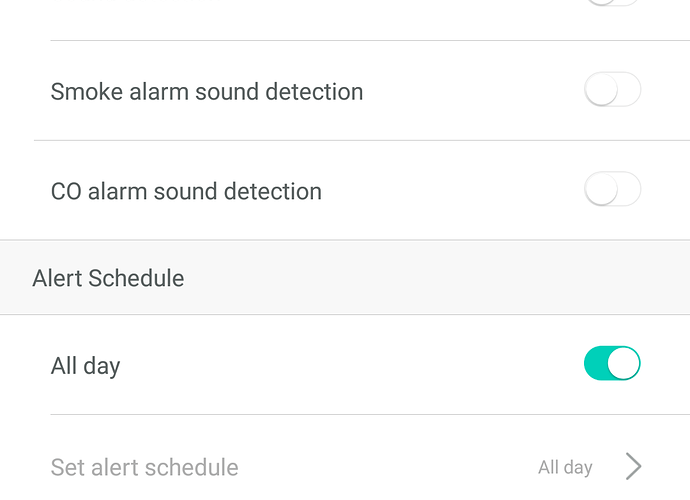 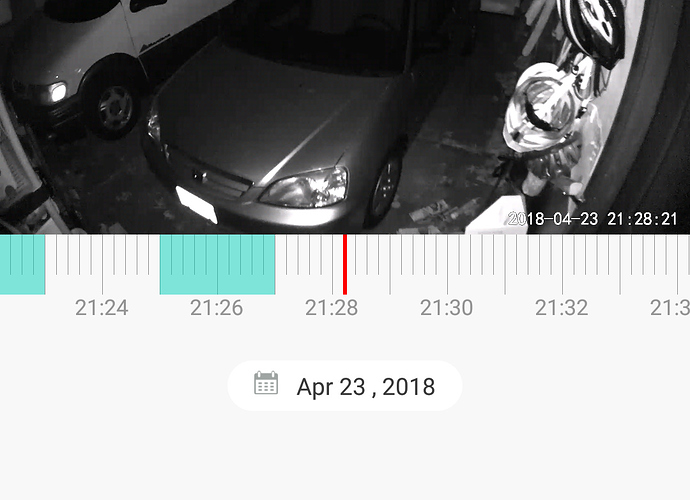 Thanks for that. I’ll check it out on iOS. But yes, that’s the crux of things. If you want to stop nuisance push alerts from one camera in a multi camera situation, you give up cloud recording for that camera all together. Or alternatively, you give up push alerts for all cameras…

Has this feature (push motification settings by camera) made it onto the feature list for any future updates?

I would like to add my voice to this request. As a previous poster mentioned, camera groups and notifications per group would be excellent. My use case for this is that I have a house with outbuildings that I would like to make a group that still give me notices while I’m home while my inside cameras do not. Really, anyone with indoor and outdoor cameras would be able to use a feature like this.

This would be a nice built in feature, but if you want similar functionality right now, you could use IFTTT. Turn the wyze app push notification off. Leave all your camera alerts on. Then create an IFTTT recipe using your specific camera you care about for the motion trigger. Then have IFTTT send you a notification with whatever message you want to say. One thing missing is an ingredient for the link back to the saved cloud video though.

I’m a big Pushover fan, so I actually use that instead of IFTTT’s built in notification. You can customize the notification sound to a siren for instance.

This was super helpful, thanks!

I just needed push notifications from one camera, and this was an easy solution. I do hope I gets officially added within the app, but I personally don’t need it to link directly.

We’re working on this now.