With the new doorbell pro, I have events displayed in the Events tab but trying to view them usually results in “Error (Code 2004): Unknown”, only a snapshot is displayed, no video. Some events do play ok though, not sure what the differences are. Even when the event recording can play, hitting the Livesteram button would show an old snapshot but doesn’t actually livestream. Anyone’s seen this behavior? Firmware up to date, app at 2.27.33, tested both on Android 11 and 10. All other v2/v3/woc cameras are working normally.

I am having the same issue with my doorbell pro. I can get it installed and it will show the video. But when I go back later on to view it’s not connecting and I get a Erro Code:20004.

I am having the same issue and now have had the doorbell replaced under warranty. Still having the issue… Sigh

Ever get this figured out?

I have the same issue it comes up with the same error code and says move chime closer to door bell. I’ve literally got it behind the door now, it seems to fix the problem when I reboot my WiFi network. This only seems to happen when I try the live view. it won’t either pick up any movement sense either, even if someone rings the bell. However I can’t reboot my WiFi when I’m not at home and connected to the network, when the error comes up. It seems like if it’s idle for a while it looses connection, however on the WiFi router interface still shows its connected. It’s quite frustrating, I have now turned of the power save mode to see if this makes a difference.

I’m not sure what caused it, I haven’t seen that error code for a while and the only thing I changed is turn off the power saving mode.

Power saving mode in the app?

In the Settings of the doorbell, under Advanced Settings

So after a few days of having the power saving mode off, no change in error code either. I’ve even tried connecting to an alternative WiFi router. It’s still coming up with the same error code. It’s definitely the device i am sure or a more likely a software glitch. I have the wyze door connected to the same router and seems to be fine,

I have power-saving mode off and no change either. Same error code. My troubleshooting steps

It’s crazy they can’t get this fixed. 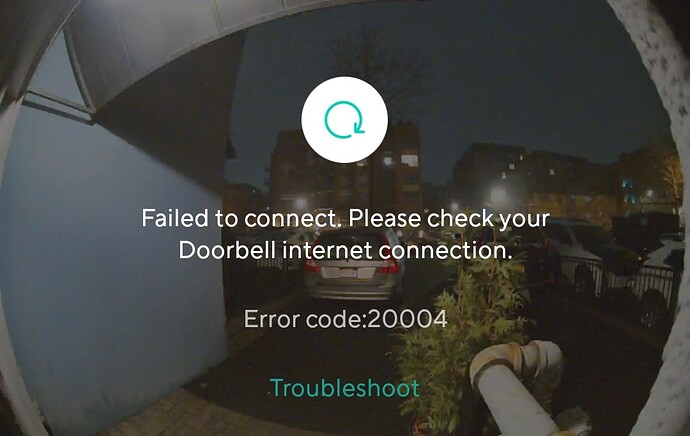 Now I’m certain it’s a glitch in their software. It’s almost like the connection between device and WiFi becomes stagnant.

Same issue for me. Been working on this for 2 months with no resolution. Support is no help at all.

Has this been fixed yet? This started happening to me today.

Nope. Not for me at least.

Power cycling the doorbell worked for me.

Nope me neither no change same issue

Yeah that’s the only way that seems to work. However this is difficult when you are not at home to do a reboot.

So far, I have not had this issue since enabling the power save option. It was a daily occurrence when it was not enabled.

Got the error again with power saving enabled. I changed to the 2G network from 5G and enabled “Running in the background” within the Wyze application Advanced settings. Power saving is still enabled and I haven’t had an issue for 8 days in a row.

Getting the same issue with mine and i got the camera on Jan 2023. Can’t believe they have not fixed it yet.