I have a v3 Cam attached to a window with the Wyze Window Mount.

It points at birdbath in the back yard.

Over the last two days I’ve had a couple of crows enjoying some quality time playing around in the birdbath.

Both days this occurred, My V3 Cams quit recording at 12 seconds while motion was still occurring.

Viewing the SD card on the V3, as well as a Amcrest Spot Light Cam, and my wife’s iphone as she filmed them playing in the birdbath on one of the two days, it was apparent to me that My V3 in question (as well as two additonal V3’s outside in the back yard, all cut off at 12 seconds while motion was occuring.

I have a v3 in my garage, that sits on the floor against the back wall. When I pull into the garage it cuts off at 12 seconds, while the car is still in motion coming into the garage. (cam is placed as it is, to ‘catch’ any mice or rats that might make it into my garage when I don’t notice it, hopefully the cam will catch them as they investigate the garage should that ever happen)

Hopefully this is not the RTSP firmware causing this issue, as it was not a problem in the past before the Cam Plus subscription models changes were implemented.

Anyone else have V3’s or other camera’s with Cam Plus cutting off at 12 seconds while motion is occurring?

Do you have CamPlus for all the cameras or CamPlus Lite? Lite cuts off cloud recording at 12 seconds but not the SD card. If you’re looking at events that’s the cloud and not the SD card.

I have cam. Plus on my cameras, and I’ve been experiencing this on my v2 cameras for the last month or so. I haven’t thought to check my v3.

I have the $99 per year subscription for up to 99 cameras. All Cams on on Cam Plus

I’ve rarely viewed the SD Card recordings until this issue started occurring, and must say that it’s not AS cumbersome as I thought it was. It was due to this issue that I spent time viewing the MicroSD card footage, that I realize I could let my Cam Plus subscription expire, and still have a ‘useable’ camera.

I have one V2 at my desk, that I’ll have to go back and see if it’s experiencing this issue (it has the RTSP firmware on it)

I setup a Pan Cam V2 next to my V3 in the garage for a comparison this morning as I pull out of the garage on my way to work. (I turned off Motion tracking on the Pan Cam). It’ll be interesting to see if they both cut off at 12 secs or not.

Test this morning. V3 went for 12 seconds and cut off, the Pan Cam v2 went for 55 seconds. (and a 2nd Pan Cam V2 in the garage that has been there for awhile that is at a different angle near the garage door… 57 seconds)

Why are the V3 cams going for 12 seconds and stopping?… All of my V3’s are doing this.

and from the footage of both camera’s the V3 starts recording many seconds later thant the Pan Cam V2, this is the first second of each screen shot:

Your V3s are acting like they are not setup in Cam Plus. Please double check by going to Account at the bottom of the main screen, and then Services. Let’s rule that out and go from there.

Exactly, they are acting like they have no Cam Plus, yet they, and all of my Cams are setup for Cam Plus. I have removed, and added back to Cam plus hoping that might resolve this issue…. (it did not)

This is the V3 in the garage that only records 12 seconds:

both Pan Cam and V3, showing they are on Cam Plus:

I’ve been having this issue on a couple of my cameras. What’s weirder is on some of mine the events recorded overlap, so I may have three 12 second recordings over a span of 30 seconds or so.

It’s irksome, but I use continuous record in my non battery cameras, so I can view the full event playback that route.

I know it’s picking up the cam plus because I have no cool down between recordings.

What’s weirder is on some of mine the events recorded overlap, so I may have three 12 second recordings over a span of 30 seconds or so.

YES, thank you for reminding me of that issue!… I am seeing duplicate recordings from one camera in the same way.

Anyone else seeing this duplicate recording strangeness?

Pulling into the garage after work today:

Camera’s are right next to each other on the garage floor: 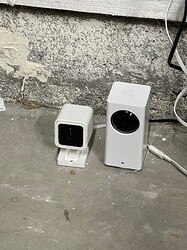 Am I wrong to assume any recordings from these two camera’s would be fundamentally the same?.. not 12 seconds for one, 1:27 for the other? (Pam Cam Motion tracking is off)

I’m going to flash the V3 to the non RTSP firmware, and see if that makes any difference.

For anyone at Wyze that might be following along:

I’m going to flash the V3 to the non RTSP firmware, and see if that makes any difference.

Did you configure CamPlus on the V3 before installing RTSP? If not, you may not be running the camera with CamPlus. You can use both RTSP and CamPlus but CamPlus needs to be configured for the camera BEFORE you install the RTSP firmware.

This morning, one of my V3’s went for 15 seconds. The others that I have noticed are cutting off at 12 seconds, continue to do so.

In Mid Flight: 12 seconds and done:

I flashed all of my V3’s with the most recent Non Beta, Non RTSP firmware (4.36.8.32) and the first camera I tested, in the garage where I noticed the issue, is now recording greater than 12 seconds while on Cam Plus.

I’ll let the V3’s run for awhile this way, then flash them back to RTSP to see if the issue returns, or if I can get greater than 12 seconds on Cam Plus while on the RTSP firmware.

I’ve seen the same problem, I think. I also have the $99/yr sub and all my cams are on Cam Plus. However, some of the recorded clips stop at 12s and sometimes I even get an ad saying “subscribe to record more than 12s”. Other times the same camera records full motion clips with no problems. I haven’t noticed a pattern.

It’s almost as if when the camera saves the clip to the cloud, it checks to see if the camera is on Cam Plus, and maybe sometimes that check fails and it defaults to no sub when in fact the camera is included in the sub. That’s my guess.

I have the same problem. Its not giving me more than 12s and I have the $99/yr subscription and all the cameras are enrolled in CamPlus.

I see the 12s red circle on all my recordings even though they record longer than 12 seconds.
This shows up on all my cameras that are cam plus annual 99 license.

Having the exact same problem. 12 second recordings on v3s with cam plus (3 of them in total) all the cloud recordings show the circle 12 to subscribe to cam plus. Very frustrating. I opened a ticket on it this week

Let us know what they say - Having same issue with dozen Cam V3 that all of sudden only record 12 seconds even while setup under Cam Plus.