I have a V3 camera with a recording grid set and I’ve recently noticed that it doesn’t record movement near the center of the recording area. It could be the distance but it used to record at that same distant before. The Motion Detection Sensitivity is set to 100, so it should be seeing movement. The camera is outside looking at my driveway and the street. It will record if there is a headlight in the viewing area but won’t record anyone walking or a car moving in that area. I need that area covered and can’t move the camera any closer. Any suggestions?

My V3 will record people at 50 feet and vehicles much further. How far away is the area you are trying to record. The cam detects vehicles as soon as they get in view (arrow). 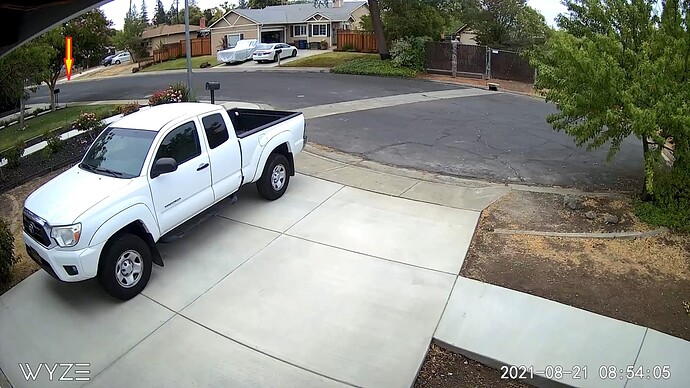 My camera used to record movement at the same distances that it now usually misses. Do you have a motion grid set up? Tonight my camera once again did not record a car that parked on the street that was inside my grid, and it should have recorded. I’m beginning to wonder if there is something wrong with the motion grid setting.

I have no detection zone/motion grid set.

That’s why I’m wondering if there is a problem with the grid system for motion detection. Because when my camera does record motion, it will motion tag them in the areas that it won’t record via the grid. So I that proves that it see’s the motion. Just tonight I watched someone put their trash cans out in the street, near mine cans and the camera didn’t record the event, even though it happened within the motion grid. I think this is just more software issues that Wyze won’t fix and customer support isn’t trained enough to help beyond rebooting and setting up the camera’s again, all things by the way that I do prior to ever contacting them.

My V3 camera also seems like it doesn’t detect motion at distances that it used to. I wonder if a firmware update has affected its motion detection capability. I had my motion detection sensitivity set at 100 but now I have found that setting it at 90 gives me greater motion detection range, at least for detecting people.

My motion detection sensitivity is also at 100, I’ll bring it down to 90 and see if it makes any difference. Wyze really needs to fix the software.

Another thing to double check is the motion detection zone. I was surprised to find that setting the motion detection zone on the V3 works exactly the opposite of setting it on my Wyze Cam Pan. On the V3, where you touch the grid enables motion detection in that area so if you want to exclude a small spot in the viewing area you have to drag your finger across 95% of the screen. On the Cam Pan it is the opposite, you simply touch the grid where you don’t want any motion `detection to occur. I found this out the hard way on the V3 after getting no events because I had touched just a few spots on the grid thinking I was eliminating some areas with light reflections.

Not allowing me to update

How to flash your Wyze Cam Outdoor firmware manually – Wyze

And what is the title of this thread? Oh yeah, V3 Camera Recording Distance. Thanks for hijacking it with Outdoor Cam stuff.

Kan je Elgels lezen? (Can you read English?) The member Njtikibar asked a question and I gave him an answer. Get over it.

Can you read English? The title of this thread is “V3 Camera Recording Distance”! By responding to him to encouraged the hijacking.

The area my V3 is looking at is much further than 50ft, more like 100ft. But it used to trigger from motion at that range with no problem. Wyze did something in the updates that made it less sensitive and basically ruined the point of my camera.