This is very confusing

How in the world is called “cooling to” going up the scale towards heat, and “heating to” going down to cool. It’s seriously confusing🤔 unless someone would like to expla 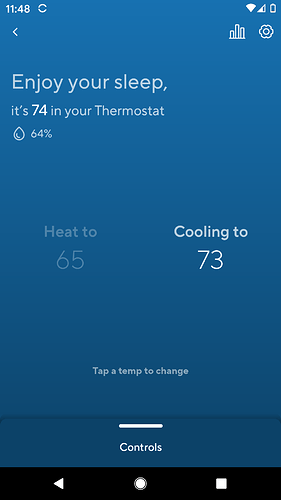 Ah, I see your confusion. It is poorly worded and is understandable why it causes confusion.

My EcoBee is similar in a way, though it has them top and bottom instead of left and right. What it is saying is:

Here’s an example of the same thing on an Ecobee Thermostat that should make more sense to you: 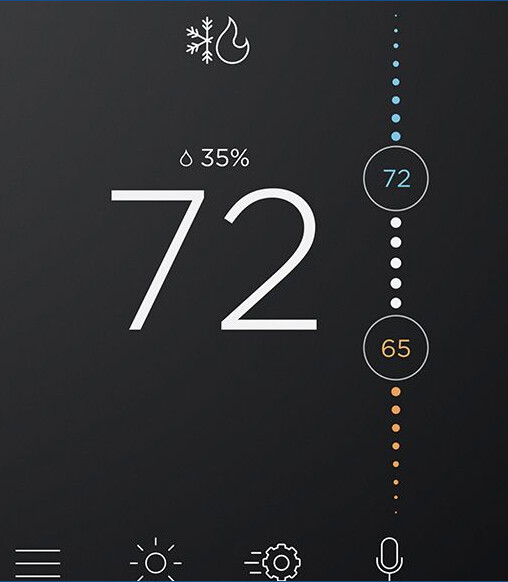 In that image it is saying the same thing, if it gets below the 65° boundary, then heat to 65° (same as Wyze is saying)…or in other words, turn on the heat, if it gets above the 72° boundary, then it starts cooling to 72° or turn on the cold. So just as Wyze puts the low boundary on the left (low side), so do others (put the low boundary/heat up zone on the bottom/left because it means you are cold).

Wyze is simply indicating the same thing in the same structure as almost every other temperature sensor…the problem is the wording they are using makes it confusing and makes it sound backward. they should definitely change the wording so it doesn’t mislead people.

Anyone have suggestions for wording changes on these, while still keeping them in the same location like every other thermostat has them? Maybe:

Something like that would be the exact same, but avoid some confusion. I don’t know what limitations they have on the display, but @Phubu is correct that it causes some confusion the way it is currently, making it sound backwards from the way it should be.

It’s pretty simple. When you need to heat a room, it’s because it’s COLD. So say the room is 50 degree’s and now the heater comes on to heat the place up higher to 65. You can go higher, 68, even 73 if you want. But of course the more energy you use and costs go up. I don’t have a problem with 65, my Dad lives with me and likes it warmer in the 68-70 degrees.

Now when it’s HOT out, say it’s 95 degrees in the room, the A/C now turns on and will cool your room down to 73 degrees. For me, that’s to cold and a big energy hog. I’d generally have it set around 78. That’s more than Cool enough for me and my Dad.

This is why you see heat 65 and Cooling at 73 on that screen. Does that make sense? Of course you can just have it set for only cooling or only heat and maybe that is less confusing? One or the other. This is just a duel mode screen. Basically set it and forget about it. When it gets to cold, it heat it up to 65, and when it gets to hot it’ll cool it down to 73. In between 65 and 73 is the middle ground. So long as your room, house, whatever is in between those two temps, your Heater or A/C will be off.

So according to that screen, Your A/C is still running, but it’s almost at temp by 1 degree. It’s at 74 and needs to get down to 73. You have a 64% Humidity Level. It’s best to have a Humidity level anywhere from 30%-50% range. Otherwise it’s either to Low or to High. 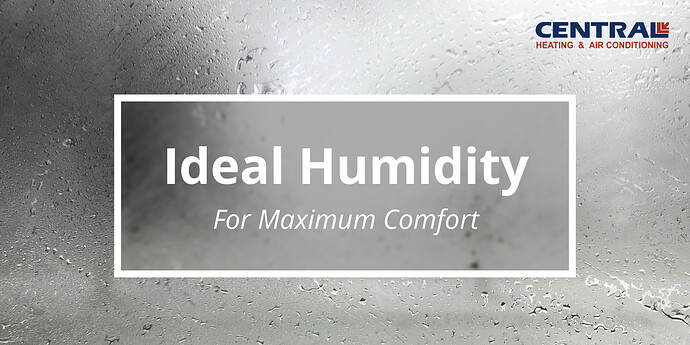 Managing ideal humidity should be a priority for every homeowner, especially when it comes to your home's year-round comfort and safety.

that’s definitely needs to be changed.

Thanks I get it now, but I think it should be kept more simple, if only they just swapped the tittle around it would be just fine I think😂

Sorry, but I don’t see that at all confusing. Your set points are 65 and 73. It is currently 74 and is cooling towards your set point of 73. The Heating side is grayed out because it is not heating at this time.
What am I missing? Note, I do not have a Wyze thermostat.

Yes, I have the Ecobee4 and it’s basically the same way. You can turn on only heat, or only cooling, or do both in AUTO. In general Heating temp setpoint is going to be lower than Cooling Temp setpoint. Rarely would it be the same or swapped. When you heat, the temp is going up and when you cool, the temp is going down. The warmer you go the more energy and the more cost to you, and the cooler you get, the same, more energy and cost to you. This is why the heat setpoint is going to be lower than the cooling set point. Each degree up in temp for heat costs you more and more money. Each degree down in cooling costs more and more money. So 78 is much better then being in a house that’s 99 degress. You can be dressed in less cloths if need me, But in general, 78 is not that bad of a temp to be in. Going down to 74 or 72, sure you can do that, but the whole point is in saving money. Same with Heating. 40-50 degrees is pretty cold inside you house, but warming it up to 65-68 is a decent temp. You can throw on a few extra cloths, use a blanket, etc if it’s a little to cold. Or you can spend the money and jack the temp up to 72 or something. But a 65-78 is a livable temp range in general. I’m in the back room right now and my temp gauge shows 67. My Dad lives with me and is 72 and so likes it warmer and cooler than I do. So if you’re older or having older parents living with you or maybe young kids or a Baby, you may want it a little warmer and cooler.

So the less you heat up or the less you cool is energy savings. I really don’t think it’s confusing what the display is showing. It makes perfect sense.

Guys i understood since the first reply

, but I do appreciate extra replies.

Something that might help fix that is to mark any of the above posts as “solution” so it shows new readers right at the top that your question has been resolved/answered satisfactorily and that you understand. Sometimes people read the original post, not seea solution and skip all the other posts to give an answer. I’ve seen that help sometimes.