Great point. Multiple symptoms and multiple troubleshooting tests. All good info for Wyze to consider. Found that post over in the 3\17 FW Beta thread. Other reports of motion activated resolution as well so there is precedence. Wyze Wired Doorbell Firmware Beta Test 3/17/2022 - #14 by mtweisenbarger

how many things are broke in the FW. This is yet another example of pushing FW updates to PR too quickly and incomplete Beta testing.

I just exchanged mine this morning and so far its connected. I will monitor it. .267 is loaded on it and Im not updating it anytime soon. 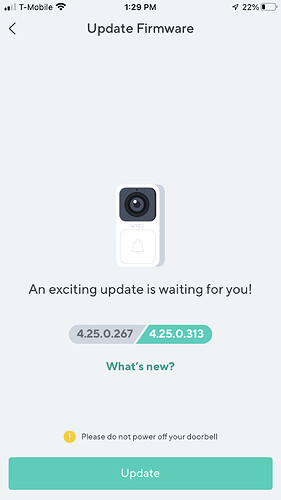 That version was over 4 releases ago, about a year ago, and must be only a build version. Not even on the Production Release Update list.

All that excitement they packed in there must be unbearable to wait!

They certainly didn’t claim it was positive excitement.

Same issue. Its recording motion but live view is stuck on 3 of 3… Im going to replace the transformer and see what happens. Every camera in my home works fine. It cant be the internet. I have a small home. I’ll
Come back with my results. One last shot and this is going back!

I don’t think power input is a problem. Transformers are likely fine. It is something with how unit is sensing the power.

You are probably right. If it does work on a different power source, one would need to document the differences in the power input voltage and amperage to troubleshoot if that is the cause in the FW logic. My power adapter is a 24V 500mA (12VA) and has no load latency on any FW up to 4.25.1.042.

Same here. Now even Chime stopped working. Wyze please fix a.s.a.p as it is going on for long and with so many people.

Yup they release broken production firmware these days. It doesn’t appear to be getting better. Heck I work in quality assurance (run my own team) and they could use us. They really need some help and I’d love to help them because I like the company.

Same issue of video stream stuck at 3of3 and waiting for a fix. Tried everything the people have mentioned - power cycling, reset and re-add, re-install app, etc. Wyze tech said there is no way to roll back the firmware manually, as the past firmware did work.

TEMPORARY SOLUTION - I did figure out that turning the night vision on/off will replicate a motion event and activate the video stream instantly. Guess this will have to do until they release a fix.

This issue was picked up on the latest iteration of Fix it Friday for action by Wyze. They are requesting logs. Suggest all affected follow the link to the Wyze post and supply the requested info in reply.

Hi, everybody! Let’s get ready for the Fix-It Friday follow-up! We have a fresh batch of issues to chase and we had some ties in some of our communities. Since our list was a bit low last week, we decided to take the tied entries in each case. Thank you for voting! Here’s what we’ve got for the month of May: Forum - Cannot select Wyze Cams when building Alexa Routines in the Alexa app

We’ve been able to reproduce this internally so you’re not alone! But we’re dependent on Alex…

This is a known issue and we’re working on it! Please send in logs using the following instructions and post the log numbers here if you’re experiencing this issue:

Account > Wyze Support > Submit a Log > Make sure you select your affected device and describe the issue in the description field. Giving the date, time, and time zone that you ran into the problem will help us locate the relevant area of the log more quickly!

Are you guys using the included wiring with the hooks to splice into your existing wiring or are you going direct from your wall wiring to the doorbell? Im having a power issue now above the 3 of 3 issue…

You should not trust any error message from the doorbell until the firmware issue is resolved. It is likely irrelevant.

Shouldn’t be using “wall wiring” at all. Home wiring is 110v and will fry the doorbell.

I am using a purchased power adapter “wall wart” brick that plugs into the wall and supplies the 24 volts AC @ 500 milliamps (.5 amp) via a supplied low voltage wire. This is above the minimum 10VA required by the WVDB. I don’t have any pre-wired house doorbell.

Specs require between 16 to 24 volts AC above 10VA

Today is the worst day since the firmware snafu started.

The doorbell is always stuck at “Step 3”. None of the tricks to mitigate the issue are working.
It’s so weird since the last 3 days were almost flawless with connection speed below 1 second.

I really can’t wait to have it working back properly. My confidence in Wyze is on a slightly downward trajectory.

Its going through the transformer. I mean the wiring thats coming out from the door to power up the doorbell. Are you guys using the included wires to splice into the wiring to connect to the little screws.

I didn’t use the supplied pigtails with the fittings. I just wrapped the stripped braided wire from the power supply around the lugs.

Ty. Im going to give that a shot. The screws are very small so hopefully it holds.

I hear you but I exchanged the doorbell that had the .060 firmware update and exchanged it for a unit that came with an old .267 and on top of the 3 of 3 issue, it now has a weird power issue where the door bell itself kind of shuts down. Not blinking lights, nothing. I have to powercycle it and it will stay for a few hours. Im just wondering if its a power distribution issue. I just want to eliminate any uneeded wiring… What a headache with this thing.

Yea, I would just wait for the developers to release a fix. I’m not trying anything or putting anymore effort into it bug squashing time

I would suggest testing the line voltage and amperage with a multimeter to make sure your getting power within the acceptable range. These can be picked up pretty cheap for a basic unit.