For Christmas I got a new robot vacuum. The beta firmware 1.6.173 adds great features (spot cleaning and multi-floor), but I noticed some weird behavior.

went to an unrelated area before returning to charging station

I mapped my top floor with a door closed to a large room. Later, I remapped it, but there were two versions of the map depending on which screen I was on.

You can remove the unwanted map with the Edit button.

I haven’t seen it cleaning the wrong selected room(s).

The basement is all a shorter regular carpet (except the bathroom). It’s not berber.

I’m not sure the dock is the problem in the basement because the robot didn’t visit close to the docking station before making a bee line for the other corner of the room, Also, on the top floor, the same carpet has not been a problem for docking. I still will try another (carpeted) location.

Thanks for the good tips. I found the flashing IR light (visible on a smartphone), but I don’t see anything in the basement that would confuse it. This area has two couches, one chair, and a big portable speaker. There’s little metal.

You can remove the unwanted map with the Edit button.

I didn’t mean an extra floor. I mean the same floor had two different layouts depending on the screen of the app. It was something like the main screen (choose a room or spot clean), customize rooms, or list of floors. IIRC, it happened after the robot incidentally noticed a new room that wasn’t on the initial quick map (because the door was closer earlier). I’m not sure, so I will pay more attention next time.

I didn’t mean an extra floor. I mean the same floor had two different layouts depending on the screen of the app. It was something like the main screen (choose a room or spot clean), customize rooms, or list of floors. IIRC, it happened after the robot incidentally noticed a new room that wasn’t on the initial quick map (because the door was closer earlier). I’m not sure, so I will pay more attention next time.

Oh, so you were seeing what the robot had mapped most recently. When you customize you will only see the map that was saved (same as in the floor list). The one on the main screen is just what it has in temporary memory.

It will only save map updates done by a full vacuum. It won’t save for spot cleaning or if any rooms are selected (*). It also must dock pretty much on the 1st try, seen it too many times fail to save if it takes longer than normal to dock. (*) I found an odd case where it actually saved a map change after selecting a room to clean. Not sure if it has a meaningful use though. So it can happen. (2022-05-28) For large changes (a new open room) it will ask at the end if you want to save the chang…

How did you get the beta firmware if you just got it for Christmas?

I got mine earlier in December and I immediately updated it to beta 173. All I did was get the beta Wyze app (Android, Become a Beta Tester – Wyze), went to Account > About > Beta program and added Wyze Robot Vacuum, it then offered up 1.6.173. I had no issues updating, it didn’t take a long time like some people had happen.

Note, there is currently no beta Android app, so 2.27.33 supports the beta 173 firmware just fine and it still has the beta program in about (unless that only shows up because I’m still subbed for future Wyze app betas).

There is apparently a list of robot MAC addresses allowed to get the beta, but I assume that is just whatever is coming after 173. Maybe I was just lucky that mine was somehow already on the list?

173 is not the Christmas Beta, it has been out for some time (8/18/21), it has most if not all the main listed features though. The only missing feature I’m aware of is base station editing. I sure hope map saving improvements (at least have more control) are going to be a thing too.

Just got confirmation that a Factory Reset MAY erase the maps. So it would be really nice if there was a way to export them. 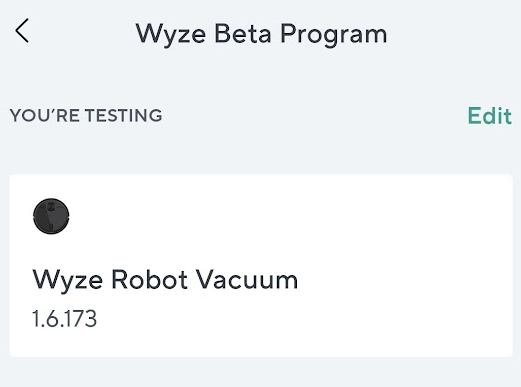 So crazy, I believe I’ve been in the beta for a while (but I forgot to opt in at first). Either way, I’ve only gotten 1 update (I think) to my vacuum since launch (and zero beta). Really hoping to get some new features soon!

I have had similar issues. Today for example it was scheduled to clean my fireplace room. It went into my living room instead. Even when I stopped it and manually had it clean my fireplace room (den), it did the same thing. It also showed on the map that the docking station was in a different part of the room. It randomly will vacuum the wrong room. Very frustrating.

Try holding the power down and allow it to power off. Wait for a bit and the power it on again. See if that clears up the problem.

Have you opened a ticket and created a log of this issue. If you have, please submit it here as well. If not, I would do this first as Wyze can review the logs to see what is going on. After you do that, try the items below.

It looks like the map rotated. I have found it easier to do perform a quick map to establish an updated one. I do this occasionally when I get new apps or Firmware.

The only other option I could think of is to clear your cache from within the app, log out of the app and restart the phone. Then when you logon again the cache should be rebuilt

@sbeach_72 had issue with the Vacuum and the map being rotated. They provided the log # 449957 for review. Wanted to make sure you were aware of this as this is another log you could potentially use in trouble shooting Map Issues.

For what it’s worth, I’m running 1.6.173 and I’ve noticed that some of the changes they recently made (wasn’t like this before a few weeks) have messed with the mapping. I’m thinking it’s more on the App side and not the robot side, as these popped up recently.

It now prompts you to “update changes to the map,” if changes are detected on a cleaning run, such as something like having a closed door (sometimes you have to). That’s fine, but it resets all of the names and makes it so you can no longer edit or select existing rooms if they were behind that change (closed door).

So it’s safe to say, this beta maybe a work in progress.

My robot vacuum has mostly been working fine (still 173 firmware), but yesterday it would not update its position or history on map during cleaning. It looked like it was at the dock the whole time, even though it was cleaning correctly. I cleaned a few rooms separately, and in the cleaning history, most are missing. Presumably, this doesn’t correctly age the accessories (e.g., main brush).

However, I noticed a cool new feature: cleaning history has a playback button.

Overall the hardware and app are great, but the software needs some bug fixes. I’m worried the engineers are working on “the next big thing” instead of this. The 173 firmware was released in August.