Is there a list somewhere of which Wyze products you all plan to get Matter certified?

I think the BIGGEST question with that is will products we have already bought and invested in be included in matter or will we have to re-invest in updated products that we already own?

Great question! If we cannot use existing products then, as they say, I am out. Can we please get this question answered asap?

I am definitely waiting to buy some things for this integration. I got your v1 sensors and I would have liked for them to be compatible with the v2 sense hub which I also got for the monitoring. Fine. Lesson learned on being early to the party with v1. But I am not getting more stuff that is not going to work with ST. I find it a great environment (WebCoRE) to automate my tasks. IFTTT is so flaky it is not worth my time.

Unfortunately, this is too early to answer that question. We know that bulbs, plugs and switch have the right chip to run Matter but there are still some uncertainty around the size of the library for Matter.

It will take some time before we can answer that question as Matter is still under very active development.

Thanks for answering and although this is not exactly what we may want to hear it does make sense.
And although not the exact same do you know if there are plans to open API use for 3rd party/customers? Another wishlist thread on this question has been active in forum but no response from Wyze.
Thanks in advance!

We know that bulbs, plugs and switch have the right chip

I thought that the integration would be from ST to the Sense Hub. That way we can access the sensors that it has access to as well as the other devices. I would also like this connection to be local. Will the sensors be accessible by ST?

Unfortunately, this is too early to answer that question. We know that bulbs, plugs and switch have the right chip to run Matter but there are still some uncertainty around the size of the library for Matter.

It will take some time before we can answer that question as Matter is still under very active development.

Why would you tie your company name to Matter if literally none of your products that are released, releasing, or due to release are known to actually work with Matter? Could you possibly be any more dishonest about it? I don’t think so.

What about the cameras? How do we get that integration into ST via Matter? That doesn’t seem to lineup.

If you guys don’t want to do it, why not just bring an open API and let the community do it for you? Hell, out the api behind cam plus if you’re worried about extra ongoing costs.

In the post above about SmartThings integration, it doesn’t seem that hubs can talk to hubs in the matter protocol, or at least the ST integration won’t be allowing that.

ST will need to be able to talk to the devices directly.

I am not sure if that is what the above means. I think for Samsung they are not allowing that but for Matter it seems you can interface with other ecosystems. I sure hope so.
:::::::
https://www.threadgroup.org/
"Matter communicates over Wi-Fi, Thread, or proprietary bridges. "
::::::: 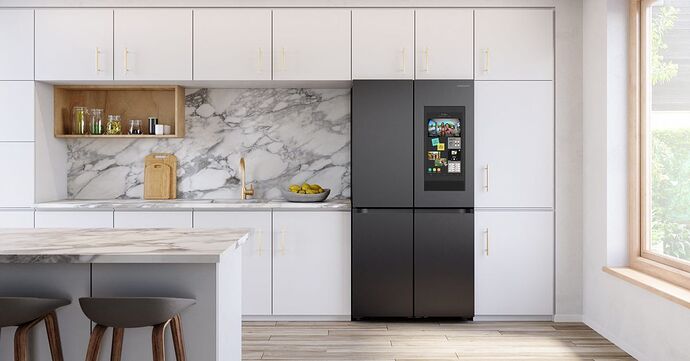 Fridges, TVs, and SmartThings hubs are all on the roadmap

Because it’s pay for play. We have no idea what it means to be Matter compliant by being outside the association. We had to pay and be part of the CSA to be able to understand what it will take to create a device and what are the impact on the overall business.
We were starting to have also some pushes from our partners to join the Matter initiative to continue working on some initiatives.
The reality of Matter is that it is still a moving target and we are not ready to talk about our plans with Matter. We are definitely interested and are looking at the impact on the current products, futures products and more importantly the current ecosystem that we have.
Also be sure that despite having 200 companies in Matter, you can be sure that not all of them will adopt Matter. I think all the traditional players will and we want to be one of them but timing is also going to be important.

In the post above about SmartThings integration, it doesn’t seem that hubs can talk to hubs in the matter protocol, or at least the ST integration won’t be allowing that.

ST will need to be able to talk to the devices directly.

Cameras are not included in Matter for the moment but there is no reason why they can’t be in the future but right now, I’m not aware of any work in that area.

For the integration, a matter compatible devices will be able to enable Matter enabled ecosystems. So SmartThings is saying, that they will enable their ecosystems with Matter. Matter devices should be able to join multiple Matter ecosystem at the same time.

I guess there is enough in Matter to do a full livestream session but for the devices to be Matter compliant, there are multiple ways: But for Wyze Sense Sensors, we can make the new hub Matter compliant and use it as a bridge/gateway. There is a provision in Matter to do just that. Since we are using the same processor than the camera (not ESP32) and it is not supported by default by Matter, we would have to recompile the entire Matter SDK to make sure it is working properly. It should be easily doable since it is using Linux Embedded if my memory serves me correctly.

Thanks @Frederik - I appreciate the frankness in discussion on this topic. It is quite refreshing.

Really, I’d like to be able to have an image captured and sent alongside the notification from SmartThings based on a trigger (e.g. motion sensor triggers when home is set to “away”). This is possible with (some) camera integrations on the SmartThings platform.

It sounds like for those of us that wanted to use Wyze cameras as part of a smart home system… we’re out of luck. At least for the next several more years or so.

Thanks for the transparency @Frederik. Camera streams and images may not be supported by the Matter spec currently, but I wonder if you could at least expose the motion and switch capabilities to matter? That way some functionality could be had between those devices and Matter controllers.

There is what I want to do and what Wyze can do. Two VERY different things!

Yes, I would like all the sensors, bulbs, plugs and Lock exposed through Matter at its launch time. But for the moment, this is a lot of work that needs to be done. Making the devices themselves compliant is not excessively difficult but we have to build up the expertise and divert some of the resources that are currently working on the engineering of the current products to work on that.
Again, it would be too long to talk about all the work that needs to be done. But there are some obvious questions like: should we keep both wyze IoT implementation and add Matter? That would most likely be possible because of the hardware limitation. So should we remove Wyze IoT and replace it with Matter? Sounds like a good idea but then how do we integrate the device in the Wyze ecosystem… Well, it means that we have to have some other means of communication with the cloud and also have a way of representing generic devices in the Cloud…
If we keep pulling on that thread, we end up with a massive amount of work that has to be achieved before we can even put a Matter device on the market.

The TL;DR is that right now, we are actively looking at Matter. I’m the POC for Matter for Wyze. I’m running several (raspPi) prototypes to understand the maturity and the complexity and develop the expertise around Matter. I’ve briefed the upper management on the business challenges and technical opportunities around Matter. I’ve also started to develop a plan for the adoption of Matter but we have not committed the development time for the moment on Matter because we have a serious backlog of features for the current products for the coming months and to support the launch of the products that have already been committed.

One thing I did not touch on was the API for the cameras. We have been working since December 2018, yes that far out, on adding the support for WebRTC to most of the video products. We have seen the benefit in the last months with Alexa and Google but this is going to open up the possibilities to connect to many other applications.
One of the thing that becomes possible is the ability to display a WebRTC session in a web browser almost natively. Most of the partners I’ve talked to (outside of Amazon and Google) have a WebRTC strategy. So there is an opportunity to have the video feeds to be dispatched. The engineering team I know is working on a comprehensive overhaul of the back end that should bring us closer to an official API. It’s not decided for the moment if we will have one or not but it was not possible before and it is becoming possible.
My 3rd party integration vision relies on people doing the work to integrate with us and not the other way around as it is not scalable in the long run and that requires an official API. Now you know where I stand on the topic.