Who else closed this survey immediately after seeing the “Do you own a firearm?” question? Who in their right mind would answer a question like this in a tech survey?

if they are looking at selling gun safes or something it would make sense. They can ask, you don’t have to answer. In fact you did exactly as you should have.

I would have continued had it been optional. I tried to skip but it was a required question, so I’m done.

I should clarify. You don’t have to answer truthfully.

Not answer truthfully? What’s the point and which lie is better?

The question should have been…

Would you be interested in smart products to secure guns?

It’s their survey and eventually they’ll see people are bailing at that question and rethink the survey but right now they’re losing information if the partial survey doesn’t get submitted.

Anything with that topic is a No-Go…Shame on WYZE!!!

Yeah I mean if you just want to get into the raffle for the $100, answer however you want. I didn’t say it was ethical, but I mean its a wyze survey not a form4 .

I don’t mind answering it. They want to build a smart safe which is a terrible idea. I’m sure all of you know lockpickinglawyer on YT and know how those smart gun locks always end up.

I know what you mean, I got asked that question at the doctor’s office before getting routine blood work done. My firearm ownership status is irrelevant to the services you provide.

At the same time though, firearm ownership is everyone’s right and I’m not going to cave to the woke mob by acting like owning a gun and protecting my family is a dirty thing that makes me a shady person. I’m also licensed through my state police to carry concealed so it’s not a secret that I own guns.

With all the issues I seem to be encountering with their Outdoor Cams, I definitely would not rely on their tech to unlock my gun in a hurry when my life could be depending on it.

Sad that Wyze would stoop to this tracking crap! Who controls them anyway??? Tired of companies trying to find who has arms and who doesn’t!!! This is shameful!!!

Where is the link to the survey?

It was emailed out this afternoon… 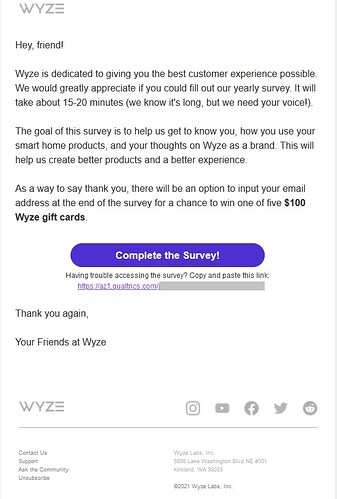 Well that is strange , searched all through email folders ,can’t find it anywhere

In this case, I doubt Wyze cares in any way at all except to try to learn if enough of their demographic of customers would be interested in some kind of gun-safety product. It’s just all about their (or any other company’s) reason for existence: the potential for $$$ not politics…I doubt they’re judging anyone and definitely not gathering information on who they can rob or break into or anything. They’re not really creating an individual customer profile or anything like tracking an individual’s specifics. Like most research and surveys, it will effectively be anonymous once combined together for enough data for a meta-analysis to see trends and profitability options. If anyone wants to encourage them to look into gun safety device, mark yes, if concerned or want to discourage them from pursuing that, mark no. A Yes will encourage pursuit of that product, a No will help discourage it, and that’s really the only thing they’re looking for…they really don’t care about an individual’s particular answer or political leanings or anything at all except whether or not there is interest in them selling something…and as mentioned of course there is always refusing to answer. I do agree it could’ve been worded better. Maybe something along the lines of “if Wyze developed an affordable smart gun safe, or smart trigger lock [or something similar], is this something you might be interested in or could benefit from?” and then include a “I prefer not to answer” option as well.

But hey, I don’t work for, speak for, nor represent Wyze in any way at all…I just think it was a simple probe about if it’s worth their time to look into it further.

I don’t believe anyone should read into the survey, it is a simple question. For all we know, they are considering a smart gun safe, or something of that nature. But if the demand is not there, they wouldn’t spend the capital on it.

If you don’t want to answer then don’t or just don’t do the survey. But lets not make this more than it is.

Exactly. It’s not that big of a deal.

No one is tracking anything. Don’t wear your foil hat that tight. Unless it’s grounded it won’t do anything anyway.

I think asking why they would be wanting to know that kind of information about their users is a legitimate question that doesn’t fall within the “foil hat” category.

I viewed another thread on here about source code in the app requesting GPS information from users and sending that information to Facebook without anyone, including a product engineer, being aware of it. To assume “no one is tracking anything” is just as ignorant as assuming they are.

The gun question is exactly where I abandoned the survey, there was no option to just skip the question. So I guess no information is better than partial information. Wyze needs to rethink this approach. Typically questions that can be considered “sensitive” information like sex, age, household income,… are optional and can be skipped if desired.