Starting some time last week whenever my V3 cameras, that have CamPlus, detect a person they will trigger “person detected” somewhere between 5 to 10 times over and over. Even if it’s the same person and they are only in view of the camera for a few seconds it keeps happening.

This shows one event (Amazon delivery person) trigger in the rules history 9 times across 2 minutes even though the person was only in view of the camera for about 10 seconds. 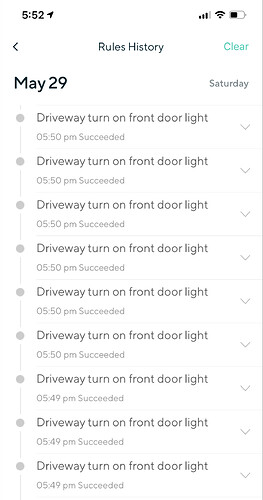 This is the rule that this fired, nothing fancy.

The worst part of this is that they are hooked into Alexa and every time Alexa gets the notice that a person is detected the Echo will alert me, but in this case it alerted me 9 times.

Anyone have any ideas on what I could do here?

I have this same issue occurring with Alexa rules instead of Wyze rules.

I have Alexa set up to announce “Knock-Knock” once whenever my front V3 with Cam Plus detects a person, then my desk lamp flashes a red light for 10 seconds then shuts off. For the last several days this rule repeats over and over again saying “Knock-Knock” repeatedly through the entire length of the Cam Plus event, and the desk lamp strobes on an off repeatedly with no 10 second delay.

I also have a rule to announce “The Front Door was left open” anytime the front door sensor is open for for like 5-10 minutes, but now that announcement triggers immediately when the door is open with no time delay.

Definitely sounds like a Wyze server-side issue since the problems are occurring with both Wyze and Alexa Rules.

Thanks for posting, I thought Alexa might be the problem, but it’s definitely Wyze if you’re having similar issues with the Wyze rules.

Will you check to see if you have been migrated to the new rules engine or if you are using the legacy rules engine? Go to set up a new rule and click “schedule” then tell me if the days of the week are showing as check-boxes or as circles that you select.

If it is colored circles that you select, then you have been migrated to the new rules engine (this is my guess), if it is check boxes, then you are still on Legacy, and that would still be good to know that these issues are occurring with both rules engines.

I have check boxes for the days of the week.

Okay, so you’re on the legacy engine, and I’m on the new rule engine and we’re both still having the issue, so we can probably rule out the rule engine itself as the issue. Interesting.

Did you submit a log to Wyze yet? If not, will you do that, and include the screenshot you took of the spazzing rules into that log submission too and then post your log ID number in here. We’ll see if we can get someone from Wyze to look into this issue for us.

Also, what is your app version number? In the app select “Account” then “About” at the bottom and under the Wyze logo, what are the numbers there?

If it is the latest beta app, I will know which employees to tag and go post a link in that thread about the latest app version release. We will potentially be able to assume the link between our issues coincides with the latest app test instead of the rules engine if that is the case.

@MyBoredMind We reviewed the log you provided and found you’re on the old Rule Engine. Could you give me your email? I’ll add you to the test group so that you can use the New Rule Engine.

@carverofchoice could you submit a log? We’re still in process for this issue.

Hi @MyBoredMind we found the root cause for this issue. While it takes some time to fix it. Since you’re using the test version and this issue wouldn’t reproduce in a official version. You can download and install the latest version once we release it this week.

Yes. My wife had me turn it off for a while because it was being very annoying spazzing out like that. I will turn it back on for a while and submit a log after it has spazzed out a few times so you have good data, then reply again here in a bit. Sorry I just saw this request today.

EDIT: Oh, I just read you found the issue. Sorry I missed your request earlier. Let me know if you still need me to try anything.

This is a corner case for cam plus users. This may happen when you’re using the test app and in the test group. If you’re using the official version, this won’t happen. However, we’re still working on it. Just need more time.

Thanks qsun. It is no problem. I am very happy testing things and helping out. I am more than willing to deal with temporary bugs for a while in the interest of helping. I know you guys do a good job identifying and resolving issues as they’re discovered. I am glad you guys keep testing out new things and making constant improvements.

The fact that you are so responsive to even the littlest of issues with this is encouraging for both users and helpers of the forum. Thank you so much for what you are doing

Thank you for supporting us. We’re on our way to provide a better user experience.

I have the same issue with multiple person detection announcements from Alexa. This (my issue) has nothing to do with the rule engines. I am on beta firmware 4.9.7.608. this is a V2 cam with Cam plus applied.

Alexa continually announces “person detected on Front Porch Cam” up to a dozen or more times back to back. Aggravated by the fact I have Echo devices in the living room and kitchen, in a fairly small house, so I get it two dozen times in time delayed stereo.

Started around the same time reported in this thread.

I’m at the point I’m going to have to turn this feature off, which is aggravating, as I pay for it.

Feel bad for you Hugh, but glad I’m not the only one. Tonight, found out Wyze skill was disconnected from Alexa. I’ll let you know if reconnecting fixes it.

Recent firmware update didn’t do anything to solve the issue. Just FYI.
Weird thing is this is only on the V2. pan Cam and V3 do not have this issue.

I have noticed that as well. I turned off my notification from Alexa. The Wyze notifications are still on and notify correctly, for me. I heard that others are having issues of a similar nature with Alexa on other devices. I think the issue is on Amazon’s side and not necessarily Wyze. but I could be wrong.